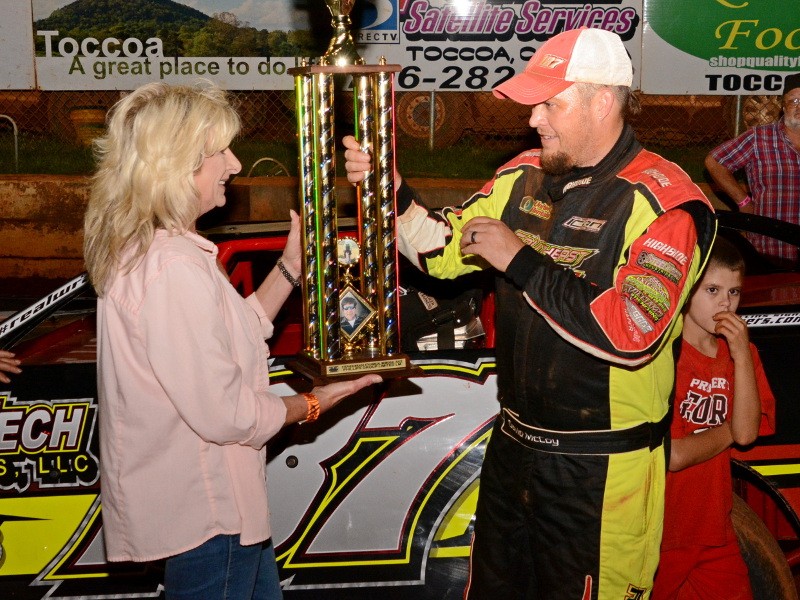 The win at the historic 5/16 mile clay speedway was worth a $2,900 for the Franklin, North Carolina racer.

Kenny Collins challenged McCoy on the first lap of the 29-lap feature by trying to make a crossover move, but couldn’t make it stick. From that point on, it was McCoy held the point, taking the checkered flag by two car lengths over Collins.

But Collins would lose the spot in post race inspection. Track officials checked the engine specs of the top three finishers. When Collins wouldn’t allow officials to pull the heads from his engine so it could be measured, he was disqualified.

That moved Payton Freeman to second, with Taylor Puckett in third.

Freeman would better that finish by one in the Midsouth Cage Equipment feature, as he held off Frankie Beard for the victory. Nick Schlager came home in third.

Ricky Smith parlayed his second starting position to the victory in the Safety Plus 602 Sportsman feature. Pole sitter Kole Hardy finished in second, with Rusty House in third.

Sterling Helm started on the pole of the Modified Street feature, with Mack English alongside. Helm suffered a flat tire early in the race and had to restart in the rear of the field. As he made his way through the field, he and Chris Nickerson tangled, sending both spinning. That ended the night for both drivers.

English, moved to the point, but was sent spinning after contact from Daniel Doster. Officials sent both drivers to the rear of the field.

That moved Billy Buffington to the lead, and he went on to score the win. Robbie Campbell finished second, with Calvin Miller in third.

Jackie Holden took the Stock 4 Cylinder feature from the pole, with Kenny Dobbs and Jamie Brown rounding out the podium.