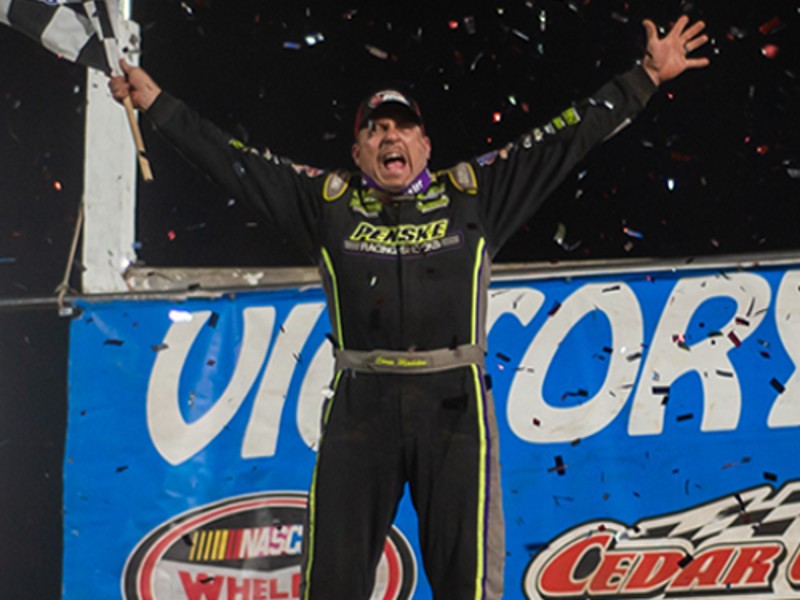 But there was one driver behind him who was hungry for his first win in the prestigious event – Chris Madden.

Madden powered to the lead in turn two, and held on through a green-white checkered finish to claim his first USA Nationals title over Tim McCreadie and Sheppard.

Madden had the most consistent car on the racetrack on Saturday night. Never dropping below fourth over 100 laps, he spent the better part of the race’s final quarter battling door-to-door with Sheppard. Madden dominated the bottom lane, while Sheppard preferred the top.

The two played cat-and-mouse until the race’s deciding moment with six laps to go. Sheppard bobbled on the cushion coming out of turn two, allowing Madden to get a run on him down the backstretch. Madden patiently waited for the right moment and pulled the trigger as they came back around into turn one, driving it in deep to slide directly into Sheppard’s line on the top.

“I knew I wasn’t going to catch Sheppard at the pace I was running,” Madden said. “So I just slowed down my pace a bit, got in a rhythm. I said, ‘if I catch him right here, I’ve got to go by him.’”

When Sheppard got to the exit of turn two, the hole had already closed and he was forced to get on the binders, giving up the top spot to Madden. A green-white-checkered finish put a tiny bit on extra pressure on Madden out front, but he got a great restart and persevered to seal the deal.

Up next, the World of Outlaws travel to Williams Grove Speedway in Mechanicsburg, Pennsylvania on Thursday, August 16. For more information, visit WorldofOutlaws.com.