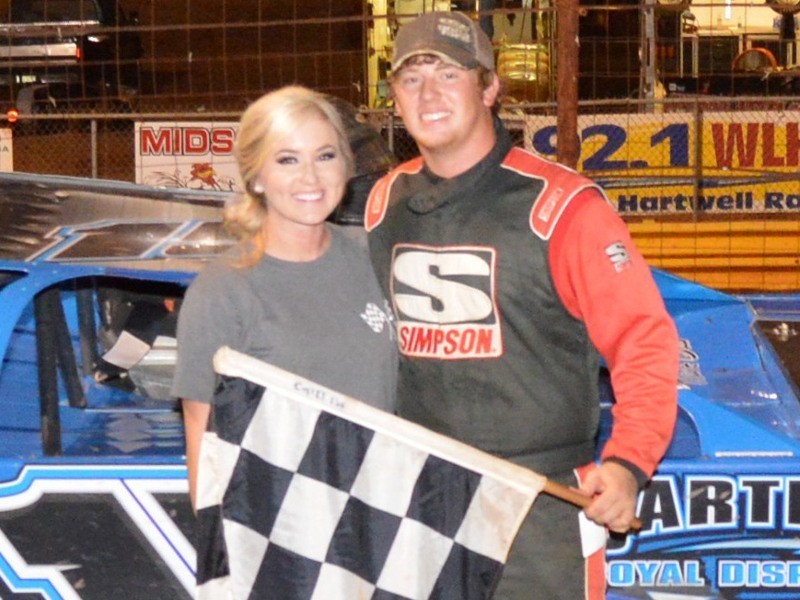 Cody Pritchett powered to the lead in Saturday’s Crate Late Model feature at Georgia’s Hartwell Speedway, and went on to score the victory.

The Carnesville, Georgia speedster came away with the lead in a three-car battle with Adam Partain and Danny Sanders, and would hold the point the rest of the way.

Sanders saw his night take a bad turn when he spun while trying to close on the leader. Meanwhile, up front, Pritchett went on to score the victory at the 3/8-mile clay raceway, with Partain having to settle for second.

Austin Reed finished in third, with Sanders in fourth and Jimmy Mason in fifth.

In other action, Grant Jordan powered to the opening lap lead, and ran away from the field to score his second straight Limited Late Model feature. John Anderson finished in second, with Jody Russell rounding out the podium.

Royce Bray also made it back-to-back wins by holding off Brant Carey to record the Hobby feature win. Shane Yarbrough, Cody Segars and Ervin Atkinson rounded out the top five.

David Walker edged out Justin Taylor to record the win in the Stock 4 feature, with Bobby Shelton in third, Dustin Bales in fourth and Grant Roberts in fifth.

Ryan Baker looked to be on his way to the win in the Young Guns feature, but saw it slip away when he spun in turn two late in the going. That handed the lead and the win to Hoyt Partain. Dustin Yiung followed in second, with Tanner Nation in third, Baker in fourth and Alyssa Goldsmith in fifth.