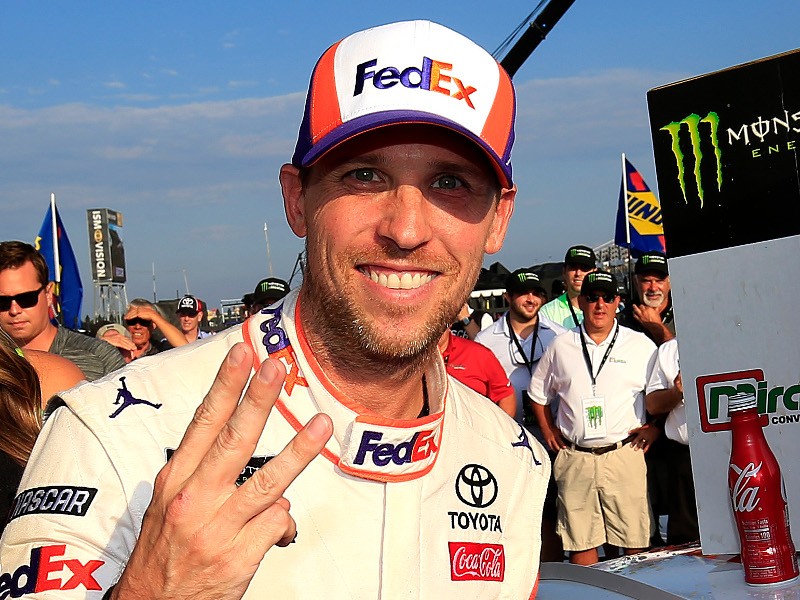 WATKINS GLEN, N.Y. – You might have to start calling Denny Hamlin “Mr. Glue.”

After all, Hamlin has been heavily involved in discussion about the placement of PJ1 traction compound at various tracks that host Monster Energy NASCAR Cup Series races, and on Saturday at Watkin s Glen, the driver of the No. 11 Joe Gibbs Racing Toyota broke some news on the subject.

So far, only Speedway Motorsports tracks and independent Pocono have used the traction compound to widen the track, but Hamlin said an International Speedway Corporation venue may be next on the list.

“When I looked at the schedule and talked with NASCAR about it, Phoenix would probably be the next candidate for it, and that’s an ISC track,” Hamlin said before opening Cup practice.

This year, ISM Raceway in Phoenix will hold the final cutoff race in the series Playoffs. Next year, it will host the season finale to decide the champion.

“I think we might try something there later this year,” Hamlin said. “Just trying to get it right. Obviously, it’s really, really tough for NASCAR, because they’re not in the cars and even though they can kind of see the race and how it plays out, we as drivers know where the extra lane is that we can’t use.

“It’s kind of been up to me and some of my other peers to really (do) the sharing of pictures, videos and things like that. Since I can’t go to each race track, it’s really been helpful to kind of set the cones out to where you think you’re going to spray and drag. Then move the cones this way or that way or further or shorter. The communication has been really, really good, and it’s made for better racing.”

The traction compound made a significant difference at Pocono, which used the PJ1 for its second race. Most often, it helps to add a workable lane to a track that has been resurfaced during the past decade.

“Pocono, for the first time, I would venture to say more passes were made on the outside at Pocono than the inside, and that is a bottom-feeder race track and has been for many years,” said Hamlin, who used the outside lane for the winning pass in last Sunday’s victory there.

“It wasn’t perfect, but certainly was a step in the right direction, and it’s something we can now build on for next year. I’m excited about it. We found a very good Band-Aid for some of these tracks that have been pretty challenging as far as one lane.”

Opening Monster Energy NASCAR Cup Series practice at Watkins Glen came to a sudden halt on Saturday, when Matt Tifft’s No. 36 Front Row Motorsports Ford spun out of control and came to rest in the middle of the track.

For s split second, Chase Elliott thought the run of bad luck that has bedeviled him in recent weeks was about to add another chapter at the 2.45-mile road course, as Tifft’s Mustang sat sideways right in front of him.

“I was like ‘Here we go — we’re going to crash another one in practice,’” said Elliott, who has gone seven races without a top-10 finish, a stretch in which Elliott has failed to finish three events because of an engine failure and two crashes.

Perhaps Elliott’s luck has started to turn. He darted to the left at the last possible moment to avoid contact with Tifft’s car and emerged from the incident unscathed.

“Joey (Logano) was stopped on the bottom, and I think myself and whoever was behind me knew there was no way we were getting stopped before we got there. I had to decide last second that the left side was the only option if I could get there. Luckily, I got over there, but I don’t really know how.”

Final practice was much more satisfying for Elliott, the defending winner at the Glen. He posted a sub-70-second lap late in the session to top the speed chart at 126.901 mph.

Jimmie Johnson’s Contract Runs Through 2020 — Then What?

Will Jimmie Johnson still have the desire to race after his current contract runs out after the 2020 season?

A lot depends on whether Johnson is still competitive behind the wheel.

Hendrick Motorsports took a step toward improving the performance of the seven-time champion’s No. 48 team by replacing crew chief Kevin Meendering with former race engineer Cliff Daniels in a move announced Monday.

But Johnson, who turns 44 on September 17, will reserve judgment on his future. Currently, Johnson is 17th in the Monster Energy NASCAR Cup Series standings, in danger of missing the Playoffs for the first time in his career. His winless streak has grown to 80 races, by far the longest drought of his career.

“I’m here through next season, and that’s when my contract will run out,” Johnson said on Saturday at Watkins Glen International, site of Sunday’s Go Bowling at the Glen. “I’ve got to make a decision at that point if I want to continue on.

“If my fire goes out, or if I feel like I’m not competitive… I think any driver would say that, if you feel like you’re not competitive, it’s time to walk away. I’m only under contract through next year, and I certainly have less years ahead of me than I ever have in my career, so part of my decision-making process, that will play a role, if I feel like I’m doing my job right behind the wheel.”

WDUN will carry live MRN Radio coverage of Sunday's Monster Energy NASCAR Cup Go Bowling At The Glen from Watkins Glen International beginning at 2 o’clock on 102.9 FM, AM 550 and streaming live on AccessWDUN.