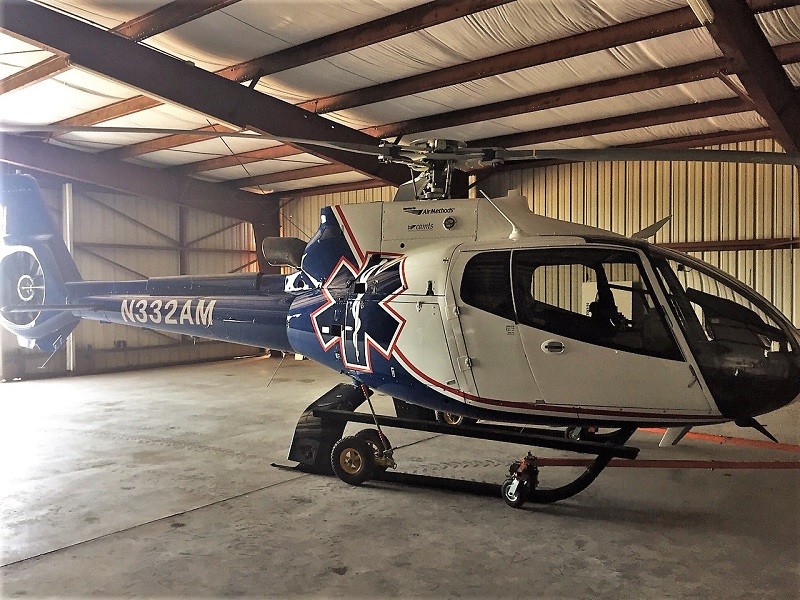 The AirLife Georgia 2 Eurocopter EC130 medical helicopter now is based at the Habersham County Airport near Baldwin.
Contact Editor

The helicopter had been based in the former emergency room at the old Lanier Park Hospital campus in Gainesville for the past 10 years.

With the completion of the new airport terminal building, a lease agreement was signed between Habersham County and Air Methods Corp., parent company of AirLife Georgia, to house the medical transport helicopter at the airport near Baldwin.

The helicopter operation’s relocation to Habersham County will benefit the residents of Habersham County and the surrounding area by providing access to air medical services and the new location will result in quicker response times for emergent and trauma situations, officials said.

The former terminal building was renovated to provide living quarters and accommodations for a staff of three, according to Habersham County Manager Phil Sutton.

During missions, highly trained medical teams care for patients with lifesaving interventions, from providing trauma care after an accident to administering clot-busting medications that must be given shortly after a major stroke to significantly improve outcomes, according to Air Methods. With the continued consolidation of hospitals and the trend toward centers with specialized heart or neurological care, the clinical support and speed of missions is critical to giving patients the best possible outcomes.

The decision to move the base from Northeast Georgia Medical Center to Habersham comes after an extensive review of the local area and its needs, according to Air Methods. Since NGMC has expanded its trauma center, Air Methods and local community and hospital leaders recognized the growing need for an air medical service that would be able to serve Habersham and the surrounding area.

“We are consistently reviewing ways that we can support our residents with the best possible resources, including medical options,” Sutton said. “AirLife Georgia’s five-year commitment to our community is a testament to everyone’s belief that this is a critical service. I believe this community-based helicopter program will provide our citizens with the best opportunity to reach a trauma center within the critical golden hour to help reduce response times during life threatening emergencies.”

AirLife Georgia 2 will provide air medical services 24/7/365 to Habersham and surrounding communities. The base will be staffed by 14 crew members, including pilots, flight nurses, flight paramedics and mechanics, and it will operate a Eurocopter EC130 helicopter.

“We are very excited to be joining the Habersham community and to be able to provide increased access to care to the north Georgia region,” said Joe Pardue, area manager at AirLife Georgia. “Over the last decade, AirLife Georgia has had the privilege of being stationed at Northeast Georgia Medical Center in Gainesville where we have been able to work closely with the community to address their needs. Over the last few years, the hospital has greatly expanded and has become a vital care provider for emergent needs in the region. After extensive discussions with leadership at the medical center and those in Habersham County, it was determined that moving to Habersham County would be best for the community so that we can provide critical care in the air services for those in a region where access to care is more limited.”

Sutton said in addition to the benefits of bringing air care closer for county residents, the contract also will help supplement the county’s budget.

“Air Methods Corp. will lease the building as a base of operations for their air ambulance business for the next five or more years,” Sutton said. “This will bring in revenue during future budget years, and Habersham County will become home to this vital medical service.”