Watkins Glen weekend off to rocky start for Cole Custer 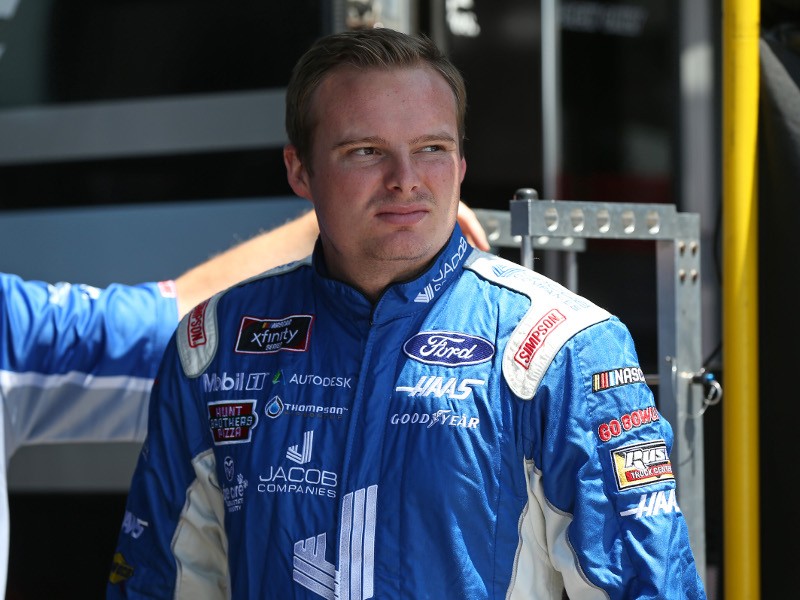 Cole Custer, seen here from an earlier race weekend, will have to go to a back up car for Saturday's NASCAR Xfinity Series race at Watkins Glen International after crashing in Friday's first practice session.
Photo: Matt Sullivan/Getty Images
Contact Editor

The left-side tires of Custer’s No. 00 Ford rolled across the curbing at the outside of the corner. Custer steered to the right, but the car suddenly twitched to the left and shot out of control into the Armco barrier near the entrance to turn 2.

With the primary car destroyed, Custer’s team was forced to roll out a backup, and crew members spent the remainder of first practice, the break between sessions and the bulk of final practice preparing the new car, an operation that included switching the race engine to the backup.

“I got on those curbs coming off of (turn) 1 and just got loose and overcorrected it into the wall,” said Custer, who will start from the rear of the field in Saturday’s Zippo 200. “Those curbs are really slick in general, and starting the weekend out without any rubber on them, they’re even more slick.

“So I just misjudged it — I messed up. It can happen, but it’s really disheartening. I felt like our car was really good, and just to do that, it just really sucks. Our guys worked really hard, and I can’t thank them enough, getting the (backup) car ready. Our car’s pretty good. It’s just a matter of being there at the end of the race.”

Custer got seven laps on the backup car and was 12th fastest in Happy Hour at 119.814 mph. Monster Energy NASCAR Cup Series veteran Kyle Busch led both practices and posted his best lap of the day (121.862 mph) in the final session.

Sam Mayer doesn’t have a license to drive a street car yet, but he’s set to make his debut in the NASCAR Gander Outdoors Truck Series a month before he takes his driver’s test.

But inexperience won’t be a problem when Mayer, who turned 16 on June 26, takes to the high banks of Bristol Motor Speedway in the No. 21 GMS Racing Chevrolet on August 15. In the NASCAR K&N Pro Series East race, Mayer won from the pole on April 6, leading all 150 laps in the process.

His remarkable record in the series this year includes wins from the pole at Bristol and Iowa Speedway, along with an average starting spot of 3.1 and an average finish of 3.6 through seven races — combining to give Mayer the series lead.

That, along with a successful test at Bristol in a GMS truck — with traction compound applied to the track — has Mayer understandably confident about his prospects in the NASCAR Gander Outdoors Truck Series.

“I got the opportunity to test the truck earlier this week,” Mayer said on Friday at Watkins Glen. “We had the VHT (traction compound) down, which really helped my learning curve there. We started out going like 75 percent, just getting a feel for it, but, honestly, it felt a lot like a K&N car there when I’m out there by myself.

“But obviously, it’s going to change a lot with 31 other trucks out there, so I’m going to have to play it by ear there and get a feel for it during practice, racing around other trucks. But right now I feel really comfortable. GMS put together a really good truck for me to test in, so I expect even better when we go out and race.”

After leading every lap of the first two stages of Thursday night’s NASCAR Gander Outdoors Truck Series Eldora Dirt Derby, Chase Briscoe would have preferred to have remained on the track and taken a chance on fuel mileage, but crew chief Vance Haefele overruled him.

Briscoe gave up the top spot when he came to pit road and never got it back. Instead, Stewart Friesen inherited the lead and held it the rest of the way in winning his first career NASCAR Gander Outdoors Truck Series race, denying Briscoe back-to-back victories in the only national series race on dirt.

But the decision to pit wasn’t what kept Briscoe up that night. He had to commute from Rossburg, Ohio, to Watkins Glen, with an intermediate stop in Statesville, North Carolina.

“I got here at 5:30 this morning and woke up at 10,” Briscoe said on Friday after posting the 11th fastest lap in NASCAR Xfinity Series final practice. “I was probably the last guy to the track. (The flight) was supposed to go from Eldora to Watkins Glen, and then there was going to be no flight at all, and I was going to drive through the night and get here about 9 this morning. Luckily, they changed that. There were a couple of other guys in my scenario.

“The airport was about an hour’s drive from the race track. I think we landed in Statesville at 2:30 and flew straight to Watkins Glen. Our hotel happened to be over an hour away. So it was definitely a long night and early morning.”

Nevertheless, Briscoe felt fine during his preparation for Saturday’s Zippo 200. The race will be his first on the 2.45-mile road course.

“I wasn’t tired,” he said. “Honestly, I definitely want to be higher up on the speed charts, but I was way more competitive than I thought I would be, for never being here …

“Running Eldora last night I think helped, because how you run these road courses, kind of elbows-up, you’ve got to be aggressive and hustle ‘em, and that’s what we did last night. I think it bodes well.”

WDUN will carry live MRN Radio coverage of the NASCAR Weekend from Watkins Glen, beginning with Saturday’s NASCAR Xfinity Series Zippo 200 at 2:30 pm on 102.9 FM and streaming live on AccessWDUN. Coverage continues on Sunday with the Monster Energy NASCAR Cup Go Bowling At The Glen beginning at 2 o’clock on 102.9 FM, AM 550 and streaming live on AccessWDUN.