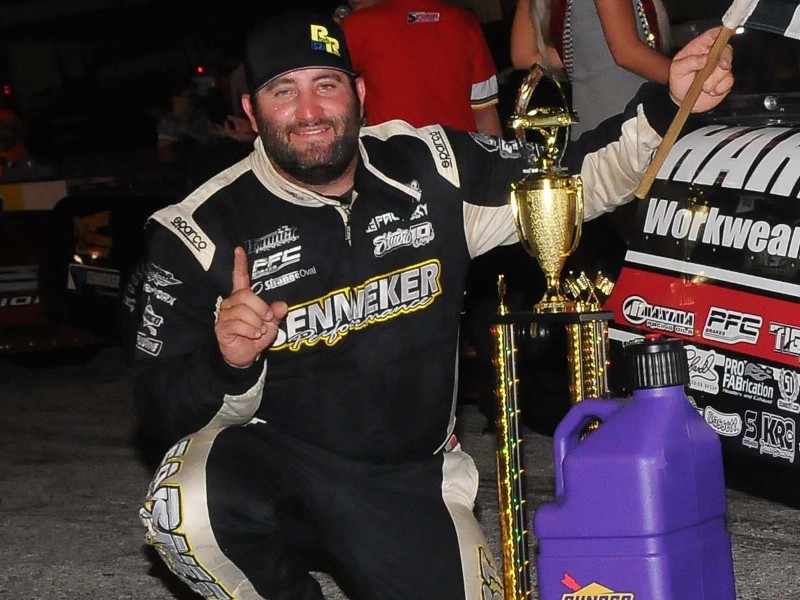 On a night with a new qualifying format at Five Flags Speedway in Pensacola, Florida, it was a familiar sight at evening’s end – Bubba Pollard triumphant in victory lane.

The shorter feature-race length stemmed from the unique format of Friday’s event, with a trio of 10-lap heat races replacing the standard single-car time trials to set the field. In the end the cream rose to the top.

“It was a good race,” said Pollard in victory lane. “It was tough. We were real free, we had been fighting free all weekend. I enjoyed the heat races, I think it mixed some things up. I think it was good for racing. I hope the fans enjoyed it. It feels good to win a race and turn around here and see the fans happy to see you win.”

The win is yet another in a busy year for Pollard, giving him two on the season in the Southern Super Series. That, along with triumphs in events such as the Joe Shear Classic, the World Series of Asphalt Stock Car Racing and the Masters of the Pros 125 gives Pollard a head of steam entering a busy late-summer slate.

“We’ve been traveling on the road,” said Pollard. “It’s been tough, it’s been hot. We’ve got another six, seven weeks straight year, running some big races. I’m looking forward to it, we’ve got a shot to win all of them.”

Roderick settled for the runner-up spot behind Pollard. The Lawrenceville, Georgia speedster drove his way from the 12th starting spot over the course of 75 laps, but ultimately needed a better-handling car to challenge Pollard for the win.

“It was a good race,” said Roderick. “I hope you guys enjoyed that, it was a lot of fun. I hope you liked the new format, I thought it was really interesting. Hopefully, we’ll keep doing that. We got some good guys starting in the back, coming through the field.”

“We started 12th and came up second,” added Roderick. “The car just got a little tight in the center to roll as good as Bubba. I was having to use the throttle to turn the car, and eventually I wore the right-rear off towards the end of the race. We’ve just got to work on it and get it a little better.”

Donnie Wilson led during the middle stages of the race after taking the top spot from Stephen Nasse, but fell to third in the closing laps. This denied the Oklahoma native his first-career win at Five Flags Speedway, but he hopes the knowledge gained will bring him one step closer to that elusive win.

“I got in a spot there where I was the rabbit,” said Wilson. “You’ve got a couple hares back there saving their stuff. We’ll learn from it, come back in September and hopefully be where Bubba’s at. We’ve got work to do, but we’re getting better.”

For more information on the Southern Super Series, visit SouthernSuperSeries.com.