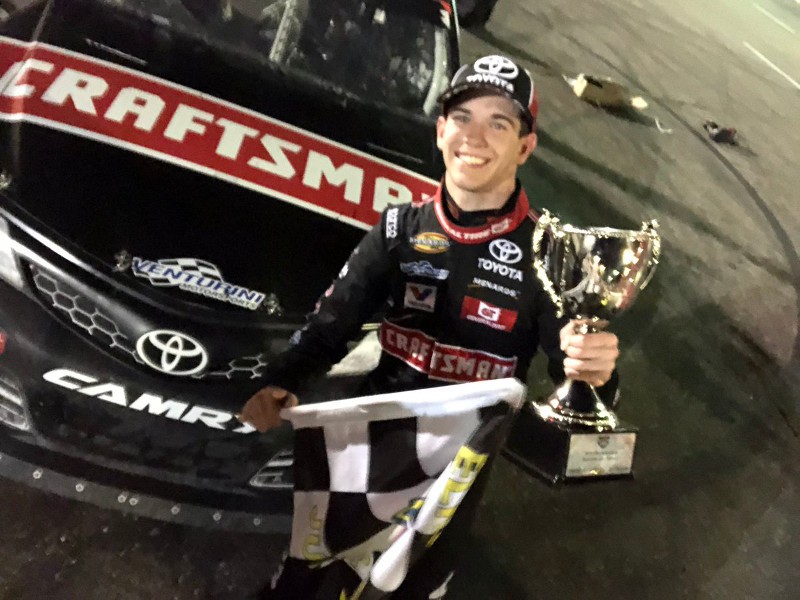 The Jasper, Georgia driver, who started seventh, was dominant throughout the race, able to drive way to a full straightaway lead on several occasions on his way to his third series victory of the season.

Although he had the dominant car, Smith did have to work for it. He slid in oil laid down in turn one by another competitor and spun on lap 146 and dropped to the tail of the lead lap. By virtue of a fast car and numerous mid-race cautions that continued to jumble the running order, Smith was able to knife his way back to the lead by lap 209.

From there, he was able to drive away to nearly a full straightaway lead crossing the stripe 4.147 seconds ahead of second-place finisher Ty Gibbs.

“I was so mad when I spun down there in (turn) one,” Smith said. “I was the only one riding the top groove at that point and there was oil all over the place. It just went around so slow, like it was in slow motion. I though we might have had a tire go down or maybe even got hit. I was just mad. You definitely didn’t want to hear our radio traffic after that happened.”

For his part, Gibbs thought he could have challenged Smith for the win but lost track position on the final restart and couldn’t ever close the gap.

“Everyone jumbled up on the final restart,” Gibbs said. “We lost a ton of track position and just couldn’t make it up.”

“It was a crazy night out there but we don’t have any scratches on the car,” he said. “We’ll take it. We have some K&N Pro Series races coming up over the next month so we won’t be back until Salem and Indy in the fall, but we think we’ll be able to come back and get us a win in one of those two races.”

Michael Self finished fourth by inches over Corey Heim. Self was racing for position with pole winner Christian Eckes on the final lap when the two made contact, sending Eckes for a spin off turn four coming to the checkered flag. Eckes would finish 11th, the final driver on the lead lap.

“Right now I can’t think of anything else from this race but the last lap,” Self said afterwards. “I absolutely hate that we got into Christian on the last lap. He’s not only my teammate but he’s one of my best friends. It puts a real damper on the night.”

The race was action-packed, with a slew of cautions for incidents throughout the middle stages. One of those cautions involved championship contenders Bret Holmes and Travis Braden. The two made contact on the frontstretch on lap 198, with Holmes catching a piece of the wall and Braden receiving body damage to the rear end of his car. Four laps later the two came together again with Braden spinning. Holmes finished ninth while Braden finished 12th.

Next up for the ARCA Menards Series is the Fans with Benefits 150 at Iowa Speedway on Friday, July 19.