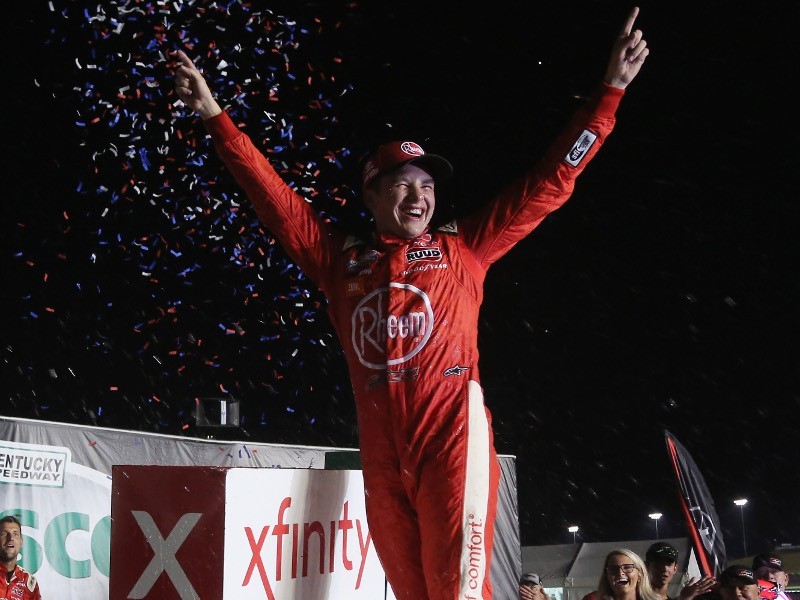 Friday’s NASCAR Xfinity Series race at Kentucky Speedway could be a tiebreaker of sorts.

Then again, the Alsco 300 could thicken the knot at the top of the series standings.

Christopher Bell and Cole Custer come to Kentucky with four victories each. Both already are shoo-ins for the postseason Playoffs. Clearly, if either Bell or Custer should win, the victor would take the win-column lead in the series.

But the race has implications that go beyond bragging rights. The 17th event of the season is the last race on a 1.5-mile intermediate speedway before the series returns to Las Vegas in September. The championship, of course, is decided on 1.5-mile Homestead-Miami Speedway.

Bell, the defending winner of the Alsco 300, was fastest in opening Xfinity practice at Kentucky. Custer topped the chart in final practice at 180.210 mph, the fastest lap of the day.

Tyler Reddick, the reigning series champion and the 2017 winner at Kentucky, has three victories this year and could join Bell and Custer with a fourth. Reddick was third in both practice sessions on Thursday.

But Bell has to be considered at least a marginal favorite. His win at Kentucky started a streak of three straight trips to Victory lane last year.

“For whatever reason, Kentucky Speedway has been really good to me,” Bell said Thursday. “I’ve been able to win my last two starts here in the Truck Series and the Xfinity Series. We’re off to a good start this weekend. We were quickest in first practice and hopefully we can keep it up.”

Last year’s Eldora Dirt Derby was the only 2019 Truck Series start for Briscoe, who runs full-time for Stewart-Haas Racing in the NASCAR Xfinity Series.

“It’s super exciting for me to go back to Eldora and try to win two in a row,” Briscoe said. “Nobody’s ever done that.”

Cutting tools manufacturer DIAEDGE will sponsor Briscoe in the seventh running of the Eldora race, NASCAR’s only national series competition on dirt.

Logistically, racing at Eldora will mean a scramble for Briscoe, who has to practice his Xfinity car at Watkins Glen the following morning.

“It’s definitely going to be tough logistically, for sure,” Briscoe said. “Luckily, I found out a couple of weeks ago that there was going to be a plane that goes from Eldora to Watkins Glen with a couple of the spotters and whatnot. I assume I’m going to be the only driver doing both of them.

“For sure, it’s going to be tough. The biggest issue right is if it rains, what happens? That’s obviously an issue when we go dirt racing. If it rains a lot, we won’t race that night.”

Kyle Busch won his second Espy for Best Driver on Wednesday night, beating out Formula 1 champion Lewis Hamilton, IndyCar’s star Scott Dixon and the NHRA’s Scott Torrence. NASCAR stars have won the Espy for Best Driver in four of the last five years, with Kevin Harvick taking the honor in 2015 after his Monster Energy NASCAR Cup Series championship, Busch winning in 2016 after his first title and Martin Truex, Jr. winning in 2018 after his breakthrough championship…

The No. 22 Team Penske Ford driven by Austin Cindric drew an L1 penalty for an illegal body modification discovered during opening NASCAR Xfinity Series at Kentucky Speedway. NASCAR slapped crew chief Brian Wilson with a $10,000 fine and a one-race suspension, which he will serve this weekend. The penalty carries a loss of 10 points for Cindric, who is fourth in the series standings, and 10 points for the team owner. After the penalty, Cindric enters Friday’s Alsco 300 129 points behind series leader Tyler Reddick.