NASCAR Cup winners list at Kentucky an exclusive one 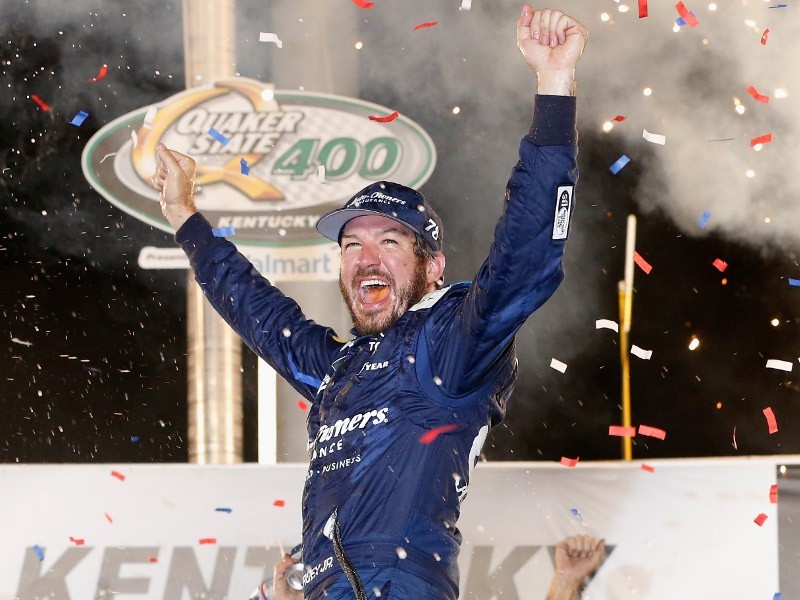 The list of Monster Energy NASCAR Cup Series winners at Kentucky Speedway is an exclusive club indeed, and Kyle Busch, Brad Keselowski and Martin Truex, Jr. would prefer to keep it that way in Saturday’s Quaker State 400.

Those are the only three active drivers with victories at Kentucky in NASCAR’s premier series, which headlines a triple-header weekend that also features the NASCAR Xfinity Series and NASCAR Gander Outdoors Truck Series.

But while Busch, Keselowski and Truex are already locked into the postseason Playoffs, a host of others would love to join the winning fraternity in the Bluegrass State and ascend to a spot on the Playoff grid at the same time.

In the relatively brief eight-race Cup history at Kentucky, only four drivers have found Victory Lane — Keselowski three times, Busch and Truex twice each and Matt Kenseth once. Truex has won the last two races at the 1.5-mile intermediate speedway.

That doesn’t mean, however, that we’re unlikely to see a breakthrough victory by a driver searching for a first win at the track. Though the Joe Gibbs Racing Toyotas and Team Penske Fords had a monopoly on the intermediate tracks for the first four months of the 2019 season, Hendrick Motorsports Chevrolet driver Alex Bowman ended that dominant streak in dramatic fashion June 30 at Chicagoland Speedway.

Coincidentally, JGR and Penske have also accounted for all eight wins at Kentucky, where Chevrolet has yet to taste victory.

In handicapping Saturday’s race, it would be difficult not to anoint Busch as the favorite, given his history at the track and the significant position it occupies in his career. In 2011, Busch won the inaugural race at Kentucky. In 2015, after missing the first 11 races because of injury, he claimed the first of three straight wins at Kentucky on the way to the series championship.

“I love Kentucky,” Busch said. “It was special there in 2011, when we were able to win the first Cup race there, and it stayed that way during our win there four years ago. I look forward to going back every year. It’s a pretty challenging race track. It used to be a place that lends itself to different kinds of setups because it was so rough.

“Fast lap times at Kentucky come from momentum. The place is so round that there’s not a ton of banking compared to some other 1.5-milers. It’s all about how round the corners are and just being able to maintain corner speed and stay on the gas. It’s a place we get excited about, for sure.”

Christopher Bell steered clear of major trouble to finish third, but series leader Tyler Reddick cut a tire in the late going and ran 16th. Cole Custer fared even worse; his No. 00 Ford was the victim of three wrecks and ultimately crashed out in 26th place.

The aftermath of the chaos left Reddick, the reigning series champion, with a 76-point lead over Bell in second place and an 81-point edge over Custer in third.

In Friday’s Alsco 300 at Kentucky Speedway, the series’ three top drivers are likely to reassert themselves.

Custer won the most recent race at a 1.5-mile intermediate speedway, picking up his fourth win of the season at Chicagoland. Bell, also a four-time winner this season, is the defending champion of this race. Reddick, the most consistent of the three with 13 top 10s in 16 starts, won at Kentucky in 2017.

“With Shiplett’s record, especially the last couple of years at Kentucky, it definitely provides a good amount of confidence that we will have a good car when we unload this weekend,” said Custer, who has finished fifth in his last two Kentucky starts. “I think we have shown that we are good at every type of track we have been to this year, but 1.5-mile tracks seem to really showcase our strength and how well SHR builds cars for these types of tracks.

“I look forward to getting to the track and showing what we have this weekend, and hopefully we can keep our top-five streak at Kentucky alive from 2017 and 2018.”

With four races left in the NASCAR Gander Truck Series regular season, there are still four spots available for the postseason Playoffs, and the competition for those berths is certain to amp up in Thursday’s Buckle Up in Your Truck 225 at Kentucky Speedway.

The assertion that four spots are available is based on the reasonable assumption that Ross Chastain cracks the top 20 in the series standings. Having declared for the series championship in mid-season, Chastain took the first step toward a Playoff spot with his victory at World Wide Technology Raceway at Gateway near St. Louis.

Chastain is currently 24th in the series standings, but he’s only 10 points behind Jennifer Jo Cobb in 20th.

Currently, only two of the top eight drivers — Brett Moffit and Austin Hill — have won races this season. Johnny Sauter and Chastain are 10th and 24th, respectively, but are expected to punch their Playoff tickets because of their victories.

That leaves six of the top eight in the standings — Grant Enfinger, Stewart Friesen, Matt Crafton, Ben Rhodes, Harrison Burton and Todd Gilliland scrambling for the remaining four positions. A win at Kentucky would be a huge boon for any of those six drivers.

Monster Energy NASCAR Cup Series
Next Race: Quaker State 400
The Place: Kentucky Speedway – Sparta, KY
The Date: Saturday, July 13
The Time: 7:30 p.m. ET
TV: NBCSN, 7:00 p.m. ET
Radio: PRN, SiriusXM NASCAR Radio
Distance: 400.5 miles (267 laps); Stage 1 (Ends on Lap 80),
Stage 2 (Ends on Lap 160), Final Stage (Ends on Lap 267)
2018 Race Winner: Martin Truex, Jr.
What to Watch For: Repaved and reconfigured in 2016, Kentucky Speedway features two distinctly different sets of corners. Turns 1 and 2 are full-throttle, but Turn 3 presents a challenging entry. Look for drivers to try to widen the track out in Turns 3 and 4 as they search for clean air… The last three Cup races at Kentucky — and five of the eight in tota l— have been won from the front row, emphasizing how important qualifying and track position are… Inaugural Kentucky winner Kyle Busch has the highest cumulative driver rating at the speedway (124.4), followed by Brad Keselowski (109.6) and Martin Truex, Jr. (105.7). All three drivers are multiple winners at the track… Truex is going for his third straight victory at the speedway. In his last two wins Truex has posted near-perfect driver ratings of 149.0 and 148.9… If you’re looking for a breakthrough victory for Kevin Harvick, Kentucky could be the place. Harvick has the fourth highest driver rating in the field at 105.5… Jimmie Johnson, who has never missed a NASCAR Playoff, enters Saturday’s race having posted consecutive top fives for the first time this season. His third-place run at Daytona left him 13th in the standings with a 33-point cushion over 17th-place Daniel Suarez, the first driver currently outside the Playoff grid… Though Keselowski leads all Cup drivers with three wins at Kentucky, the 1.5-mile speedway is a feast-or-famine track for the 2012 series champion, who has six top-10 results but finishes of 33rd and 39th in the other two races… Keselowski is the only driver to win in multiple car makes—a Dodge in 2012, Fords in 2014 and 2016… Eight different drivers have won Cup races this season, but only seven have clinched Playoff spots, the exception being Daytona winner Justin Haley, who is running for the Xfinity championship… Only one of the eight Kentucky races has gone to overtime.

NASCAR Xfinity Series
Next Race: Alsco 300
The Place: Kentucky Speedway – Sparta, KY
The Date: Friday, July 12
The Time: 7:30 p.m. ET
TV: NBCSN, 7:00 p.m. ET
Radio: PRN, SiriusXM NASCAR Radio
Distance: 300 miles (200 Laps); Stage 1 (Ends on Lap 45),
Stage 2 (Ends on Lap 90), Final Stage (Ends on Lap 200)
2018 Race Winner: Christopher Bell
What to Watch For: Only three former winners at Kentucky are in the field this week: Christopher Bell (2018), Tyler Reddick (2017) and Stephen Leicht (2007)… The NASCAR Xfinity Series “Big 3”— Bell, Reddick and Cole Custer — had combined to win nine straight races in the series before Ross Chastain broke the string last Friday at Daytona International Speedway. All told, the top three drivers have accounted for 11 wins in 16 races so far… Joey Logano won three straight Xfinity races at Kentucky (2008-2010) and Austin Dillon won two in a row (a track sweep in 2012), but there are no Monster Energy NASCAR Cup Series drivers in the field this year… In the 24 Xfinity races held at Kentucky, an astounding 21 have been won from top-10 starting positions, 11 from the front row. All of Logano’s and Dillon’s victories have come from the pole… There’s a huge gap of 92 points in the standings between 12th-place Ryan Sieg in the last Playoff-eligible position and 13th-place Gray Gaulding. Bell, Reddick, Custer and February Daytona winner Michael Annett are the only drivers who have locked themselves into the Playoffs with victories so far this season… Historically, Bell has the fifth highest driver rating at Kentucky (115.6) and the highest in this year’s field. Bell is also an exception to the top-10 starting spot statistic. He won from 12th on the grid last year.

NASCAR Gander Outdoors Truck Series
Next Race: Buckle Up in Your Truck 225
The Place: Kentucky Speedway – Sparta, KY
The Date: Thursday, July 11
The Time: 7:30 p.m. ET
TV: FS1, 7:00 p.m. ET
Radio: MRN, SiriusXM NASCAR Radio
Distance: 225 miles (150 Laps); Stage 1 (Ends on Lap 35),
Stage 2 (Ends on Lap 70), Final Stage (Ends on Lap 160)
2018 Race Winner: Brett Moffitt
What to Watch For: Playoff hopeful Ben Rhodes is the defending race winner. He is one of two former winners in the field, the other being veteran Matt Crafton… There are no full-time Monster Energy NASCAR Cup Series drivers in the field, good news for the series regulars given that Kyle Busch won all of his five starts earlier this season, using up his quota in the series… Johnny Sauter will compete in his second race following a suspension for overly aggressive driving at Iowa. In the five starts since his victory at Dover, Sauter has finished no better than 13th… The competitor with the highest driver rating in this year’s field is Brandon Jones (fourth overall at 97.4), who is not running for the series title. Of the title contenders, Todd Gilliland has the highest rating (96.3), followed closely by Rhodes (95.6)… The last five races at Kentucky have been won by drivers starting first, second or third, a statistic that underscores the importance of qualifying at the 1.5-mile track… With four races left in the regular season, Grant Enfinger holds a commanding 52-point lead in the standings over second-place Stewart Friesen. Enfinger has scored 10 top 10s in 12 races and has completed all but three of a possible 1,950 laps.