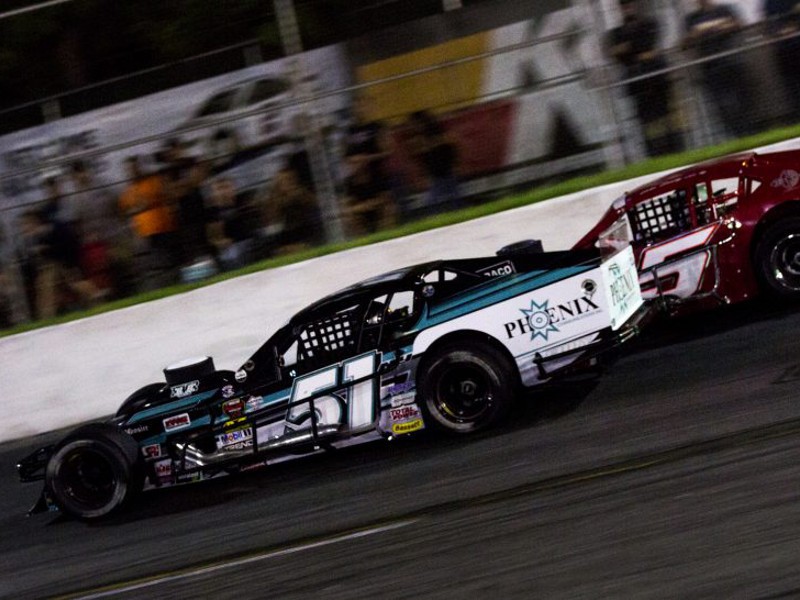 There was contact, and even spinning, but it was enough for Justin Bonsignore to score his third straight NASCAR Whelen Modified Tour victory at New York’s Riverhead Raceway on Saturday night.

Bonsignore restarted to the inside of track regular John Beatty, Jr. in overtime, and coming to the checkered flag, contact between the two drivers sent Beatty up the track, and Bonsignore spinning nose-first towards the frontstretch wall. In the midst of his spin, he crossed the line first in the Buzz Chew Chevrolet Cadillac 200.

The victory was Bonsignore’s third of the season and his 23rd career in series competition. He becomes just the third driver in series history to win three straight at Riverhead, joining Mike Ewanitsko and Ryan Preece as the only drivers to accomplish the feat.

“The restart before I was able to hang with him a few laps, but John had a better car, and I was really shocked he took the outside on the last restart,” Bonsignore said. “He gave me a good shot getting into three, but you are coming to the checkered. I hate racing like that. But these races are so hard to win, and we need to win all of the races we can to get back in this points race.”

Beatty looked to have the car to beat in the final stages. He passed Timmy Solomito for the lead on lap 150 and was at the point for a near run to the finish, until a caution for a wreck down the backstretch with three laps to go closed the field up. Beatty selected the top lane, and when the field went down into turn one at the green, the contact started between the two leaders.

They leaned on each other the final two laps, until the contact in turn four, coming to the checkered, sent Bonsignore spinning. Beatty, a regular in Riverhead’s NASCAR Whelen All-American Series Division I Modified class, was disappointed in the result, but happy with his effort. He nearly became the first track regular in more than two decades to win a Whelen Modified Tour race at the oval.

“I was just keeping up with the pace and my car just kept getting better and better (before the last yellow),” Beatty said. “Everyone races their own way. I’m not the kind of guy to drive someone up a lane or two, but Justin did his job. He won the race.”

Timmy Solomito, who led 37 laps, crossed the line third. Solomito took the lead for the first time on lap 76, after contact between Coby and Solomito sent Coby spinning in turn one, while racing for the lead. Ron Silk and Craig Lutz rounded out the top-five.

Coby leads the championship point standings by 31 over Silk, while Bonsignore is third, 32 points back.

The NASCAR Whelen Modified Tour returns to the track at New Hampshire Motor Speedway as part of their annual Monster Energy Cup Series weekend on Saturday, July 20. Select drivers will also compete in the All-Star Shootout at New Hampshire on Friday, July 19.