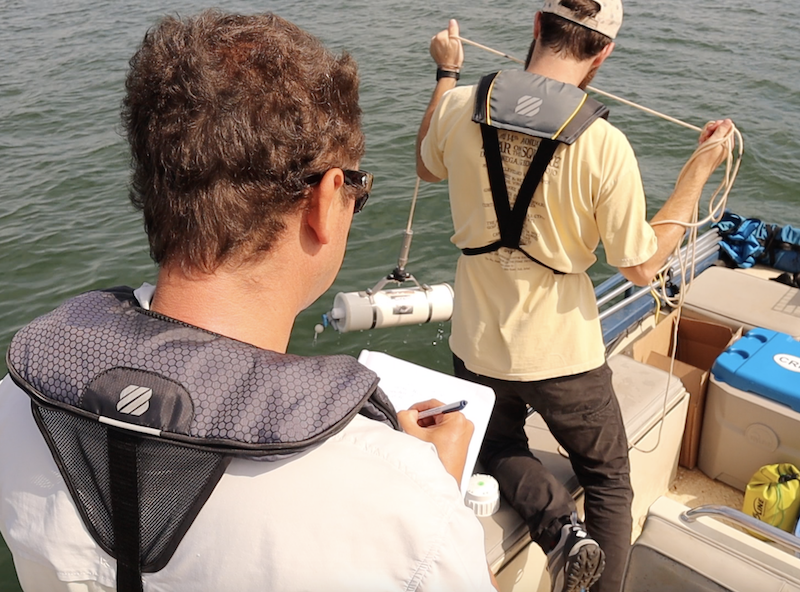 Recent scares about the quality of Lake Lanier’s water have gotten the attention of lakegoers, but there could be peace knowing several efforts at maintaining a frequent monitoring system for safe recreational lake use and water quality are in place.

Officials from Chattahoochee Riverkeepers and the University of North Georgia separately conduct regular testing of the lake’s water, looking at both health of the lake itself and the health of people who use it.

The riverkeepers travel by boat once a month to test 10 different sites on the lake to test for current algae activity. But once a week, the non-profit tests 38 sites for bacteria, like E. coli, through their program called Neighborhood Water Watch, Riverkeeper Jason Ulseth said. The organization has monitored the lake since 1994, looking at both algae and bacteria levels.

“The algae levels are really looking more at the health of the lake itself, and then E. coli levels more look at the recreational safety – is it safe for you to go swim at the beach,” Ulseth said.

Overall, the water of Lake Lanier is typically considered healthy, Ulseth said. The lake is clear, deep and cold – three factors that work in favor of high-water quality. Algae, in particular, blooms better when the water is warm, shallow and at times will leave the water green in color, he said.

Ulseth said high algae levels are not particularly harmful to humans by touch, but it is harmful to the overall ecology of the water. At extreme algae levels, fish kills are likely, because the natural process of the algae results in a lack of oxygen in the water, suffocating the fish living in that water source.

The direct impact humans can experience from high algae blooms is the effect on drinking water. High algae levels will leave drinking water with a foul odor and a green tint no matter how many times the water is treated or filtered, Ulseth said.

But while Lake Lanier is considered clean and healthy, the riverkeepers have noticed higher levels of algae than they would like to see, a result from heavy rains washing pollutants into the watersheds and ultimately flowing into the lake, Ulseth said.

“We need to reduce the levels of algae coming in,” Ulseth said. “Just think about when you’re outside, anything that is on the land surface, like dog waste, when you get that heavy rain it’s going to wash it into our lake. So, we want to make sure we are protecting our waters,”

Taking action is as easy as limiting the amount of fertilizer added to a yard or maintaining a septic tank properly so that nutrients are not seeping into the watershed, he said.

The University of North Georgia has monitored the watersheds leading into Lake Lanier for over 32 years. The main focus for their testing is to record and research what is coming in and out of Lake Lanier, Stacie James, the program coordinator for the Environmental Leadership Center at UNG, said.

The UNG water lab is funded by the municipalities surrounding Lake Lanier, which includes Hall County, Forsyth County, Gwinnett County and the City of Gainesville. Frequent testing makes it easy to identify the trends of the different testing sites and to help the municipalities be proactive given there is an issue, James said.

“Because we have done this for 32 years and we test bi-weekly, we can easily detect when there’s an abnormal occurrence --whether it’s dissolved oxygen, or a nutrient analysis has gone different or there’s an outlier, it allows us to say ‘Hey, something is going on right now,’ and we can let our funding partners know before there is a long term environmental impact, ” she said.

UNG helps the municipalities locate pollutants before someone from the public reports their child getting sick, for example, or the EPA gets involved, she said.

But the people who really deserve the credit are the students, James said. The students collect water samples from the different sites and process them in the water lab, giving the students necessary experience in the lab and in the field, she said.

“The main importance the water lab is to monitor our watersheds, and for people in surrounding communities, as well as the rest of the state and the city of Atlanta, know we are taking care of our environment and that we will be able to provide fresh water and predict what the impact will be for future generations,” Emily Williamson, a senior at UNG, said.

The common message from both Ulseth and Williamson is that upstream effects lead to downstream consequences. Many pollution sources overlap, Ulseth said.

“Look at septic tanks or dog waste," Ulseth said. "They have multiple effects. For one, there are nutrients associated with that which can cause potentially higher algae levels, and two, are the pathogens in that, so we do see higher so we see higher levels of E. coli after heavy rains, because of some of those sources being flushed into the lake.”

For Williamson, she wants people to realize the effects people have on the environment.

“A lot of people think we are separated from nature, when in reality, this is our home,” Williamson said. “We are all connected, and water is a prime resource that can demonstrate how it affects both animals and humans.”