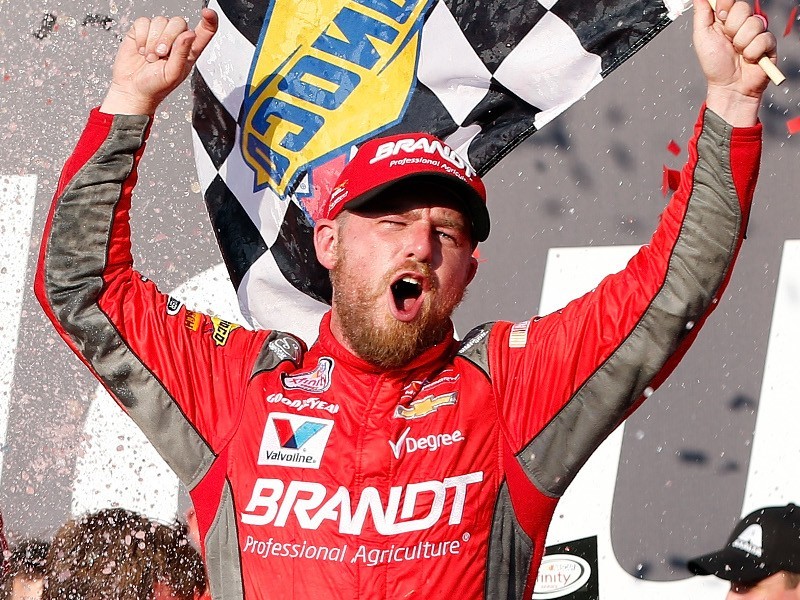 “This is my home track,’’ Allgaier said during a Friday media availability. “It’s also my home track but also (my sponsor) Brandt’s home track and they bring a lot of customers and employees so it’s always unique because you’re trying to find that balance.

“Add in family and friends and all the guests Brandt brings, as much as I love coming home, it is hard because you do put a lot of expectation on yourself. You put a lot of pressure. You always leave the weekend like someone got shorted, so that’s probably the hardest part for me. But this is such a great facility and we love coming here.’’

Allgaier, who won in 2011 and 2017, is one of only two former Chicagoland race winners in Saturday’s field – joining fellow two-time winner and reigning Cup champion Joey Logano, who is making his first Xfinity start of the year.

That same victory magic can’t come soon enough this season. Allgaier is ranked fourth in the points standings, but is winless on the season. The top-three ranked drivers – Tyler Reddick (three wins), Christopher Bell (four wins) and Cole Custer (three wins) – have hoisted the vast majority of the 14 trophies this season. Those three drivers – Reddick then Custer then Bell – were fastest in opening Xfinity Series practice at Chicagoland.

By this time last year, Allgaier had two trophies already – winning at Dover and Iowa. He would go on to win at the Mid-Ohio and Road America road courses and top it off with a victory at Indianapolis Motor Speedway; the best season victory output of his nine-year Xfinity Series fulltime career.

This year, Allgaier has been productive and close. His No. 7 JR Motorsports Chevrolet has earned eight top-10 and seven top-five finishes – a championship setup most any other season. He led 138 laps at Bristol, but crashed out. He answered by leading 86 laps the next week at Richmond only to finish third. He has three runner-up finishes (at Daytona and back-to-back races at Dover and Charlotte).

“It’s interesting to me because we fired off the season and obviously we had some good runs, but we weren’t as fast as we’d like to be,’’ Allgaier said. “That’s probably the one thing that’s really hard to put your finger on, when you’re off a little bit. It’s like what area are you off because there’s about ten thousand things you could do differently.

He could only smile when comparing identically intense efforts between 2018 and 2019, producing such different results.

“Last year was crazy because everything we did was right. Even when we didn’t have the fastest car, we could win the race. That’s probably the hardest part.

“That’s been the interesting part, it couldn’t have been more opposite from last year,’’ Allgaier added. “That being said though, we were great in the regular season and terrible in the playoffs. So we’ve been steadily working on our program and if you look week in and week out the three JRM cars have gotten better and better. … I’m excited for the playoffs and I think we can be a championship-winning car.’’

Jeffrey Earnhardt has been all smiles and positive vibes this Xfinity Series season and Friday afternoon he remained optimistic and grateful for more opportunity awaiting him.

The 30-year-old grandson of the late seven-time NASCAR Cup champion Dale Earnhardt has scored major career milestones even in a part-time season. He earned his first Xfinity Series top 10 with a sixth-place showing at Atlanta Motor Speedway in March and his first top five, a third-place finish at Charlotte in May. He has three top 10s in six starts this season and earned the outside pole position at the season-opening Daytona race. He has started top 10 in five of the six races he’s competed in.

Five of Earnhardt’s previous starts have come in Joe Gibbs Racing Toyotas. This week he’ll drive the No. 81 XCI Racing Toyota for the second time this season – and is splitting starts between the two teams.

“It’s been huge,’’ Earnhardt said of the results this year. “In my opinion it’s every driver’s dream to be able to drive for Joe Gibbs Racing and also with Xtreme Concepts Racing and them having the support from Joe Gibbs. It’s incredible.

“You go out every weekend knowing you’re racing for a win when before, a good day was racing for 25th you know, and you’re trying to take care of the car. Now, if you don’t leave it all out on the track they get mad at you.

“It’s been a change, but it’s been a good change. It’s exciting to have the opportunity to showcase my talents because people start to doubt you and wonder if you can drive or not when you’re in bad equipment. There’s tons of drivers out there well-talented who may never get the opportunity to compete in good equipment just because of circumstances. So I’m very fortunate and thankful for the opportunity I’ve got. I just really want to capitalize on it and get that win this year. I know we’ve been close and had some good runs but I really want to put it all together and put the car in victory lane.”