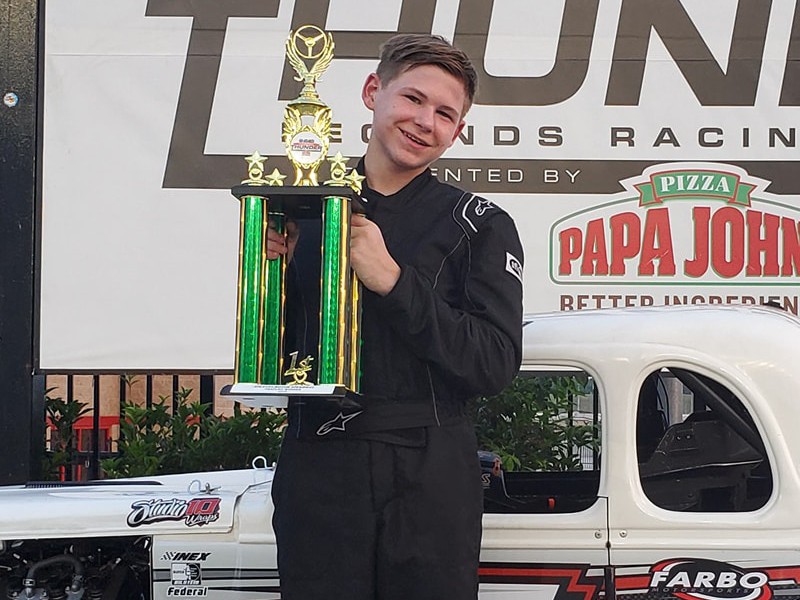 HAMPTON, Ga. - Lucas Ruark has had a lock on Atlanta Motor Speedway’s victory lane early on in Thursday Thunder action this season.

The Suwanee, Georgia racer won in the season opener for The Associates Group Young Lions on May 30.

Last week, he used back-to-back race nights on the AMS “Thunder Ring” to add wins two and three to that total.

On Wednesday night, Ruark started on the inside of the second row and jumped door-to-door with pole sitter Ashton Whitener on the opening lap of the race. Whitener got tangled up with Austin MacDonald on lap six and fell to the back of the pack allowing Ruark to pull away from the field for the win.

On Thursday, Ruark continued his hot streak with his third consecutive victory. MacDonald put together a solid effort to take second, followed by Jaiden Reyna in third.

In other action on Wednesday night, Kerbi Mueller posted her first career Racing Radios Rookie Bandoleros Thursday Thunder win. Mueller held off Bailey Buchanan, who finished second, and Baylor O’Neil, who was third, for the victory.

Carson Ramsey earned the win in a heated Racing Radios Outlaws feature. Ramsey started fifth, but was able to move to the front of the field by the fourth lap. Two laps later, Trevor Wester got past Ramsey for the lead. Glued to the back bumper of Wester for eight laps, Ramsey made a last lap pass to take the checkered flag.

In the Wallace Electric Masters feature, Bill Plemons, Jr. held off Robbie Woodall over the final two laps to earn his second consecutive feature win of the season. Plemons started on the outside of the front row and was able to slide down in front of Tony Armbruster who was on the point on the first lap to take the lead. A late caution helped Woodall move up to second and set up the two lap shootout between the top two finishers in the division from a year ago.

Ryan Rackley notched his first win the VP Racing Fuels Pro Division in just his second start amongst the best competition in Legend cars. Bumping and banging with Joshua Hicks on the white flag lap, Rackley was able to slide to the inside of Hicks coming out of turn four and won the drag race down the frontstrch for the win.

Max Brady was the beneficiary of a last lap caution to help him earn his first career win at the Thunder Ring in the CMS Group Environmental Services Semi-Pro feature.

“This is my first ever Thursday Thunder win,” said and excited Brady. “I’ve been racing here for four years and I’ve gone through a lot of struggles with these things and this just means a lot. I just don’t know what to say.”

Brady was chasing Audrie Ruark, who led every lap of the race until she got spun exiting turn four on the final lap of the feature. D.J. Canipe came home second and Rickey Springer was third while Ruark finished ninth.

Lucas Vera dominated the Racing Radios Bandits feature, leading all 20 laps for the win. Vera outgunned Jacob Brindley from the outside pole to take an early lead on lap one and never looked back as he claimed his first win of the season. Cody King, Carson Ruark, Garrett Gumm and Kaleb Brandley battled hard for third with three wide racing across the strip with three laps to go. It was King who earned the podium finish as he pull ahead of the trio and crossed the strip in third.

On Thursday night, Brianna Freeman snagged her first Racing Radios Rookie Bandoleros victory over Kerbi Mueller, who herself took her first checkered flag one night prior.

“It’s really challenging, but once you get the hang of this it’s so fun,” Freeman said in victory lane.

In the VP Racing Fuels Pro feature, siblings Taylor and Jensen Jorgensen worked together to stay in position to contend for the victory. Taylor, who was oh-so-close to winning one night earlier only to be bumped out of the lead late, took advantage of a restart with five laps to go and gave Davis Rochester a bump, knocking him out of the bottom groove and giving her room to take over at the front of the pack. Taylor held on from there, taking the checkered flag first for her first Pro division win, followed by her brother Jensen in second.

“I’m so glad to get redemption after last night,” Taylor Jorgensen said. “I felt like I had been bullied on the track a couple of times in the last couple of races and as a woman in racing you have to hold your own and stand up for yourself. I feel like I did that tonight so I hope I inspired some kids out there.”

The drivers of the Wallace Electric Masters Division kept it clean for the majority of their race, with only one caution slowing the action during the 20 lap feature. Bill Plemons Jr. remained perfect in the 2019 season, earning his third win in three races this season, with Robbie Woodall in second.

Lucas Vera had the car to beat in the Racing Radios Bandits Division race, but almost lost the victory when Jacob Bradley shot by on a restart in the waning laps. However, an untimely slide by Bradley was enough for Vera to take back the lead and ultimately the checkered flag.

The Thursday Thunder Legends Series continues with its fourth night of racing on Thursday, June 13. For more information, visit AtlantaMotorSpeedway.com.