Adventurer almost half way through his "Lanier Lap" of Lake Lanier 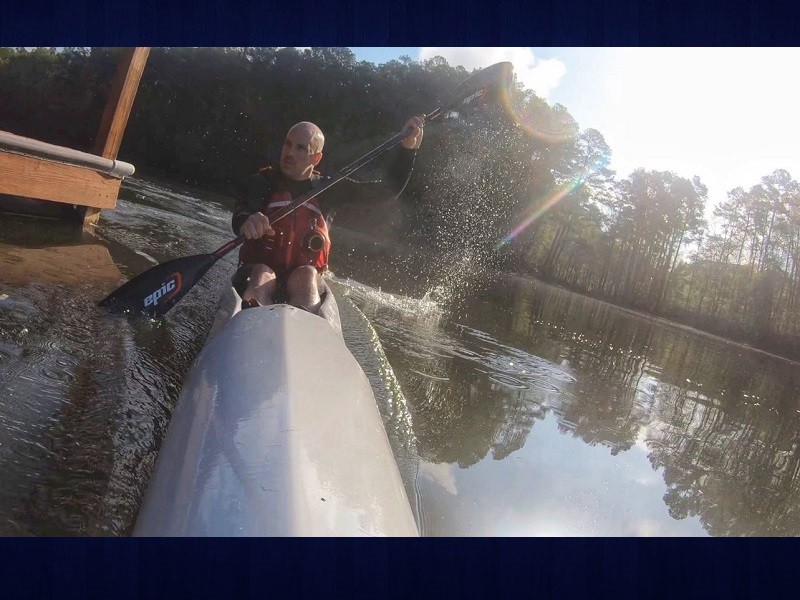 By day he works for the Research Institute at Georgia Tech, but in his free time Josh Forester likes to push himself to the limit and is currently testing his endurance by paddling the entire shoreline of Lake Lanier.

Adventure Sportsman Forester left from Tidwell Park early Thursday morning and made it almost halfway through his journey by Saturday evening.

He calls this feat the "Lanier Lap" and said he's been making plans to attempt the challenge for the past 6 months. Part of the rules he's set for himself include paddling his kayak around the entire outline of the lake while staying 50 feet from the shore.

When asked why he chooses to put his body and mind through such difficult tests, he explained, "At an earlier point in my life I took away endurance sports, adventure racing, and things like that from my life and I lost a lot of joy in my life because of that. I was trying to focus on something else at the time and I suffered for it."

He said he hopes the 400 mile journey will take him about 5 days to complete but Friday night into Saturday Forester paddled in the foggy darkness and said the stormy weather slowed him down.

"For me, it was very difficult wearing headlamps and trying to see the shore and what directions it's changing and other objects like fallen trees and docks and things like that was far more difficult," Forester explained.  "So, my pace kinda slowed to a crawl, unfortunately."

The forecast for the rest of the weekend includes a Flash Flood Warning for the area through Sunday evening and more rain.

"A lightning storm is not something that I do. I'm not like a thrill-seeker that seeks out danger," Forester said. "But I've paddled during thunderstorms down rivers where they have, you know, tall objects along side the shore before and I've never really felt threatened by it. I mean, that may prove foolish. We'll see."

He said he suffered some digestive track issues he thinks were associated with dehydration and exhaustion Thursday night and the heavy amount of rain has added to his physical strain.

"Because it's an open cockpit, I've got a lot of rain coming in. So, of course, the cockpit has an inch of water at the bottom of it," Forester explained. "With this particular kayak it has a rudder that you steer with your feet.as you're paddling. It has two pedals. So, the touch points there are the ball of your foot and your heels and they're kinda resting on the bottom of the boat. So, my heels have been in that one inch of water the entire time and they're pressing on the bottom of the boat. They're sore and bruised and saturated with water."

When asked about morale and support, he said, "There have been some boaters that have actually come out specifically to catch up with me because of the live tracking. But then there's been also literally close to 100 people come out to their docks waving me by, cheering me on, and people with signs and things like that. So, it's incredibly encouraging."

Forester said a teacher completed this journey years ago, but she took almost a year to complete the lap.

It will be a little while before Forester finds out if his attempt will be placed in the Guinness World Records book, but he said he plans to submit for the honor.

His most recent accomplishment before the "Lanier Lap", included successfully apexing North America’s tallest peak, Denali, on a self-guided expedition.

His other skills include experiences in distance running, yoga, backpacking, mountain biking, cycling, paddling, rock climbing, and most recently mountaineering.

You can learn more about his adventures and see the details of the "Lanier Lap" by visiting his website by clicking here.

If you'd like to track his progress, there are 8 stages to his journey.

To view the beacon for stage one, click here

To view the beacon for stage two, click here

To view the beacon for stage three, click here

To view the beacon for stage four, click here

To view the beacon for stage five, click here

To view the beacon for stage six, click here

To view the beacon for stage seven, click here

To view the beacon for stage eight, click here