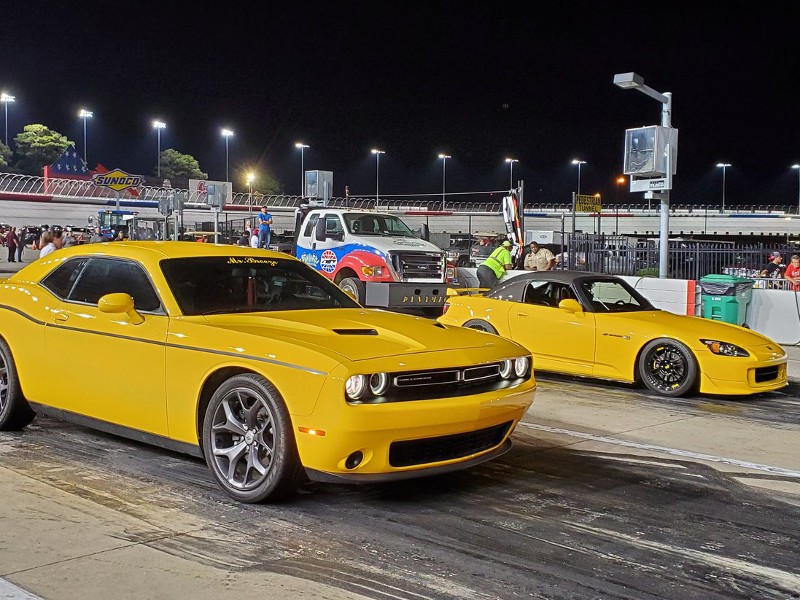 Drag eliminations started with the Harding Plumbing, Heating & Cooling Domestic division with 11 competitors before being whittled down to the final round pairing of Dontavisous McKibben in his 1986 Buick Regal and David Smith behind the wheel of his 1990 Izuzu.

“I got a quick start,” said McKibben after his final round victory. “Sixty feet wins the race, and I had to get out on ’em.”

As a regular of Friday Night Drags, it’s the crowd, the excitement and variety of cars that brings out McKibben each week as he chases a division championship.

“We gonna try to take it all the way,” said McKibben looking forward to the start of the points season in three weeks.

Another pair of drivers who used opening night as a tune up as they prepare to chase a division championship faced off in the QuikTrip Pro division final. Phil Wallace in his 1967 Chevy II edged out Kevin Mayo in the last race of the night.

“I don’t know, I never seen him,” said Wallace when asked about his final round victory. “He was back there somewhere, I looked over and I didn’t see him, but I’m sure he was there somewhere.”

It was a good showing for Wallace on opening night in a car that hasn’t seen a lot of action recently the pit lane drag strip.

“The car hasn’t’ been out in over a year,” said Wallace as he looks ahead to the points season.

Other notable winners include Benley Bidot in his 2015 Chevrolet SS edge out the 2019 z06 Corvette of Steve Shafer in the South River Agency New Edge final. Vincent Varda in his 1979 Mazda Rx7 claimed victory in the Summit Racing Equipment Sportsman Division with a final round win over the 1988 Ford Mustang of Tim Hall.

Drivers will get one more opportunity to tune up their machines on the pit lane drag strip in preparation for the points season next Friday, May 17th before every run counts with the start of the points season on May 31st as drivers chase division championships.