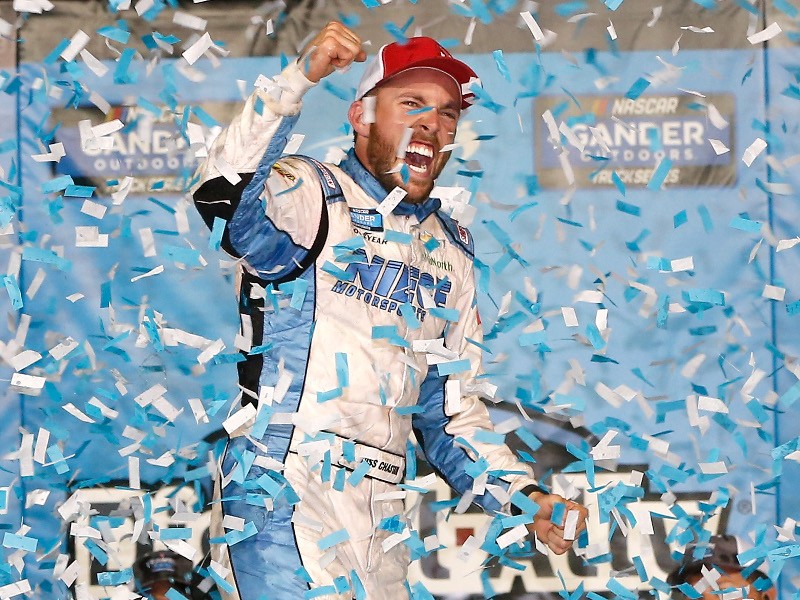 Chastain took the lead on lap 165 of 167 after Stewart Friesen ran out of fuel — the result of a miscommunication between the driver and crew chief Trip Bruce. Chastain crossed the finish line .483 seconds ahead of runner-up Ben Rhodes to secure his first victory in the series in his 66th start and the first for Niece Motorsports and owner Al Niece.

Friesen, on the other hand, rolled home in 15th, a lap down and a study in frustration as a first victory in the Truck series continued to elude him.

For Chastain, the victory was a welcome vindication after his rags-to-riches-to-rags story of 2018. With superb performances in limited NASCAR Xfinity Series action with Chip Ganassi Racing last year — including a victory at Las Vegas — Chastain earned a full-time ride in Ganassi’s No. 42 Chevrolet for 2019, only to lose it when the team’s sponsorship collapsed.

“Aw, man, this is what sports is all about,” Chastain said, barely able to contain his emotions. “We had the world by the tail last fall, and everything got taken away from us. We didn’t quit, though … I’m going to celebrate this one a lot more than I did the last one.

“I thought, after the last one (in Las Vegas), they were going to come a lot more easy. But it’s not easy … I hate to see Stewie lose one like that. I know he’s been trying to win, but, yes — we got it!”

Friesen came to pit road for his final stop under green on lap 126 but left his stall after taking right-side tires only on a planned four-tire stop. Though Friesen had a lead of more than five seconds over Grant Enfinger when he got back up to speed, the shortness of the pit stop didn’t allow the crew to fill the fuel cell.

Friesen’s chances looked better when the third-place truck of Brett Moffitt got loose under Enfinger’s Ford and cut Enfinger’s right rear tire, forcing both trucks to pit road for unscheduled stops. And when the No. 33 Chevrolet of Josh Reaume stopped on the track on lap 146 to cause the sixth and final caution, Bruce figured Friesen had enough fuel to finish the race.

Within three laps of the checkered flag, however, Friesen ran out.

“It’s been a dream to race at this level and thanks to all the car owners that have given me a chance after all these years,” Friesen said. “I came with nothing but a helmet bag. Just a little miscommunication that we need to work on.

“We just can’t close it. I figured I’d screw up a restart at the end, rather than run out of fuel. They said that we were to the good. I didn’t know we were taking four (tires). I thought for sure we were taking two. Just a lot of silence on the radio. That’s it.”