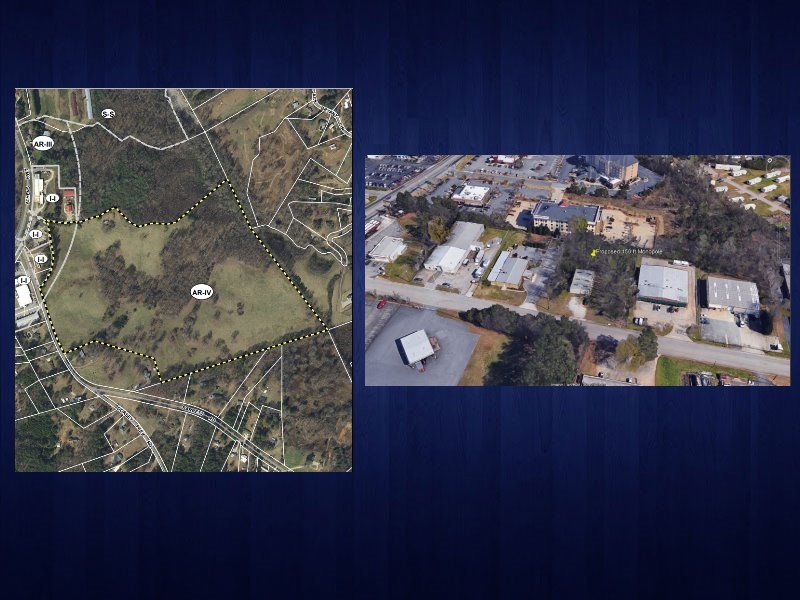 (left) Property being rezoned for a subdivision on Barrett Road and (right) the proposed site for a cell tower in Gainesville. (Photos courtesy Hall County documents)
Contact Editor

The subdivision will sit on just over 71 acres of land on the north side of Barrett Road near Dorsey Peek Road.

Three residents spoke during the public hearing before the vote. They expressed concerns over a lack of commercial development and police patrol in the surrounding area.

Hall County Planning Director Srikanth Yamala said while the rezoning is changing the property to Planned Residential Development, the neighborhood will not be subject to the county's newly amended PRD code because Silverstar Construction applied for the rezoning before the new code was approved.

District Three Commissioner Shelly Echols made the motion to approve the request. She added two conditions to the development, with one being that the neighborhood will need to include a 50-foot buffer on all sides of the property except for the side that fronts Barrett Road.

"Most of the subdivisions, especially when there's a rural area round those subdivisions, we do put a buffer in just to keep the houses from sitting right on top of someone's farm," Echols said.

The cell tower will sit on less than an acre of land on Delta Drive in Gainesville just south of Browns Bridge Road.

Franco Lugo spoke on behalf of Eco-Site, the company looking to build the tower, at Thursday's meeting.

"This tower is needed to improve the network in this area," Lugo said. "It will enhance the quality of the service and also will alleviate the surrounding network, offloading its capacity."

One resident spoke against the request, saying the 150-foot tower could pose safety concerns to nearby residents and businesses if it collapses. Lugo said the tower is being designed to fall safely if it fails.

"It's very similar to the power lines you see on major roads, those monopoles. It's that type of design, so it doesn't fall like a broomstick...just straight down."

Commissioners approved the use to allow the tower unanimously. Lugo said the tower would house T-Mobile signal coverage.