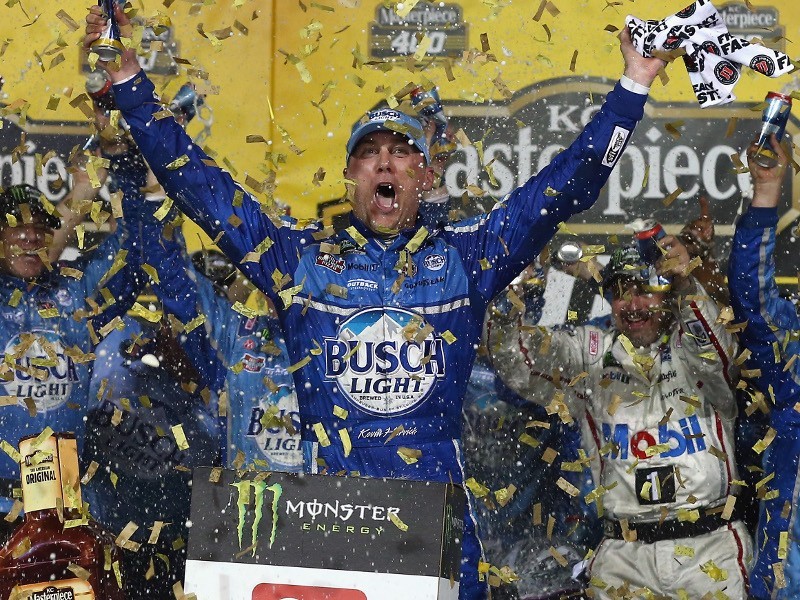 With eight Monster Energy NASCAR Cup Series victories in 2018 and a near-miss at his second Cup title, Kevin Harvick came into the 2019 season feeling understandably confident in himself and his Stewart-Haas Racing team.

But 11 races into the season, Harvick and his No. 4 team are still surprisingly looking for a first trip to victory lane. That’s not to say they haven’t been close. But as defending winner of Saturday night’s Digital Ally 400 at Kansas Speedway, Harvick would like nothing better than to right the ship.

Last year, Harvick won this race from the pole position – a place he’s started more than anyone else in history at Kansas (four) – and he also holds the track qualifying record at 197.773 mph (October, 2014). Historically the pole position is the winningest spot on the Kansas grid, producing six winners to date.

This season, however, Harvick and essentially the rest of the field find themselves playing catch-up to Joe Gibbs Racing and Team Penske, whose teams have combined to earn 10 of the first 11 trophies. The other typically “hot” driver at Kansas, two-time race winner Martin Truex, Jr. has won two of the last three 2019 Monster Energy Series races, including last week at Dover. in his new No. 19 Toyota ride for JGR. He swept the two Kansas races in 2017 en route to winning the series championship.

Last year, Harvick had already won four times before the series arrived at the Kansas 1.5-miler, where he won again. In fact, his SHR team had five wins total through the opening 11 races in 2018 with Kansas’ own Clint Bowyer winning an early season trophy in Martinsville too.

That the Penske Fords have won this year – twice with Brad Keselowski and once with Joey Logano – assuages the situation some for the SHR Ford team. But patience is not a practical virtue as the regular season approaches the halfway point. SHR has 25 top-10 and 10 top-five finishes among its four drivers but that conspicuous “0” where it would prefer a higher number.

Harvick is third in the points standings despite being the only driver among the top seven without a victory yet. He trails three-time race winner Kyle Busch by 63 points and is 58 points behind second place Logano.

“Our cars ran fine at Texas,’’ Harvick said of the similar 1.5-mile venue the series has already competed on. “Obviously, we had some isolated problems. Our cars from the Stewart-Haas standpoint haven’t won a race, but they ran fine at Texas.

“We’ve been in contention. We were plenty good at Bristol (Tenn.) and Richmond (Va.), so it’s really just a detail thing at this point to get one of them to victory lane.

Enfinger re-took the lead with a fourth-place finish at Dover, while previous championship leader Stewart Friesen finished 12th. Although Friesen was disappointed to fall 11 points back in the title chase, that was the first time he was running at the finish in three career Dover races, so he still comes away feeling encouraged.

Sauter (Dover) and rookie Austin Hill (Daytona) are the only truck regulars to score a victory so far in 2019, but that should change again this week with primarily championship contenders competing at the Kansas 1.5-miler.

Matt Crafton is the only multi-time winner (2013 and 2015) in the field this week. The two-time Gander Trucks champion is keeping the title contenders honest. He’s ranked sixth in the standings – 37 points behind Enfinger – and has top-10 finishes in five of the last six Kansas races, including three top-five showings.

Additionally, he finished either first or second at Kansas for four consecutive years between 2013-16.

Monster Energy NASCAR Cup Series
Next Race: Digital Ally 400
Defending race winner: Kevin Harvick
The Place: Kansas Speedway – Kansas City, KS
The Date: Saturday, May 11
The Time: 7:30 p.m. ET
TV: FS1
Radio: MRN, SiriusXM NASCAR Radio
Distance: 400.5 miles (267 laps); Stage 1 (Ends on lap 80),
Stage 2 (Ends on lap 160), and Final Stage (Ends on lap 267)
What to Watch For: Defending race winner Kevin Harvick (2016 Fall, 2018 Spring) and 2017 Monster Energy NASCAR Cup champion Martin Truex, Jr. (swept 2017) have won four of the last five Kansas Speedway races. … Truex is the only driver to sweep a season’s races (2017). … Two of the last three races have been won from the pole position – Truex in Fall, 2017 and Harvick in Spring, 2018. … The pole position is the winningest spot on the starting grid, producing six winners. Twice it’s happened in consecutive races – Matt Kenseth and Kevin Harvick 2013 season; Truex and Harvick, 2017-18. … Seven-time Cup champion Jimmie Johnson and Harvick are the winningest active drivers at Kansas with three victories each. …Harvick is the all-time winningest polesitter with four pole positions, including three in a row from 2013-2014. … Only twice in the last 10 races has the driver who led the most laps gone on to win. (Truex in Spring, 2017 and Joey Logano, Fall, 2015). … There are eight former winners in the field this weekend. …. The deepest in the starting field a race winner has come is 25thon the grid – Brad Keselowski in Spring, 2011. …. Kyle Busch is the only driver with victories in all three marquee series at Kansas Speedway. He has two NASCAR Gander Outdoors Truck Series trophies, four in the NASCAR Xfinity Series and one in Cup. …Only one time in the last 10 races has a manufacturer won consecutive races – Truex’s Toyota sweep in 2017. … Parity has been evident at Kansas. Chevrolet has four wins in the last 10 races. Ford has three and Toyota has three. … Chase Elliott is the youngest driver to win at Kansas. He took the last trophy at the track in Fall, 2018 at the age of 22 years, 10 months and 23 days. … Mark Martin is the oldest driver to win there – in October, 2005 at the age of 46 years, nine months. … Chevrolet leads all manufacturers with wins (12) and pole positions (10). …. Hendrick Motorsports is the winningest team at Kansas with seven victories. … Kurt Busch has made the most starts at Kansas (26) without a victory. … Logano leads all active drivers in average starting position (9.632). … Ryan Blaney and the late Jason Leffler are the only drivers to earn their very first Cup series pole position at Kansas. … No Cup driver has scored his career first race victory at Kansas Speedway.

Gander Outdoors Truck Series
Next Race: Digital Ally 250
Defending race winner: Noah Gragson
The Place: Kansas Speedway – Kansas City, KS
The Date: Friday, May 10
The Time: 8:30 p.m. ET
TV: FS1
Radio: MRN, SiriusXM NASCAR Radio
Distance: 250.5 miles (167 laps); Stage 1 (Ends on lap 40),
Stage 2 (Ends on lap 80), and Final Stage (Ends on lap 167)
What to Watch For: There are only two former race winners in the field this weekend – Matt Crafton and Johnny Sauter. …. Crafton is one of only two drivers to win multiple times at Kansas. He has two wins (2013 and 2015). Kyle Busch won twice (2014 and 2017). … No driver has ever won consecutive races. Last year’s winner Noah Gragson is not entered this weekend. … Kansas has been home to five first-time series winners – Ricky Hendrick won his first and only truck series race in the 2001 inaugural Kansas truck race. Jon Wood (2002), Erik Darnell (2007), James Buescher (2012) and William Byron (2016) also earned their first NASCAR race wins at the track. … Six of the 18 Kansas races have been won from the outside pole position, making the second starting spot the most prolific. Nine of the 18 races have been won from the front row. …. Manufacturers have been very “streaky” in this race. Toyota has won the last six straight races. Prior to that Chevrolet won three straight. …. Toyota leads all manufacturers with eight wins at Kanas. Chevrolet has six and Ford has four. … Kyle Busch Motorsports is largely responsible for Toyota’s streak – contributing four of the last six Toyota victories. … Twice a driver has won at Kansas en route to the season championship – Buescher (2012) and Crafton (2013). …There are three women entered in this weekend’s race – Jennifer Jo Cobb, Natalie Decker and Angela Ruch. This will be the track debut for both Decker and Ruch. … ThorSport Racing teammates Grant Enfinger and Johnny Sauter are ranked first and second in the standings. Enfinger holds a slim four-point edge on Sauter. And they both boast solid average finishes at Kansas. Enfinger has an average finish of 9.5 with two starts. Sauter has an average finish of 8.8 with 10 starts. They are the only drivers with average finishes less than 10.