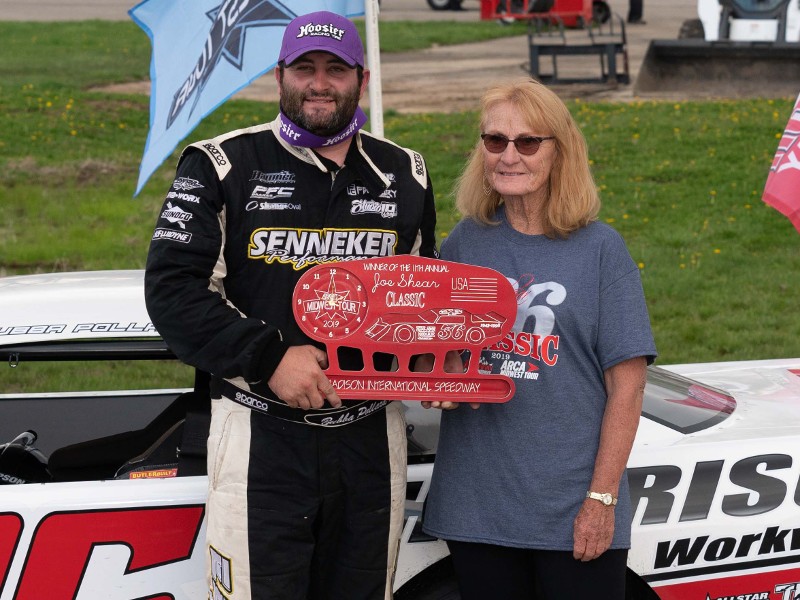 Senoia, Georgia, is a long way from Oregon, Wisconsin. In fact, it’s nearly a 900 mile trip.

So when Bubba Pollard decided to make the journey north to race with the best in the Midwest, he made it more than worthwhile as he picked up the win in the ARCA Midwest Tour Joe Shear Classic and a $10,000 check.

“We made a change after qualifying and it was game on,” added Pollard. “We decided to take our tires late and it paid off.”

Twenty-seven drivers took to Wisconsin’s Madison International Raceway as part of an event that honored one of the greatest short track legends, Joe Shear. Shear won four championships at Madison and 66 feature wins on the half-mile that celebrates it’s 50th birthday this season.

Ricky Baker and John DeAngelis, Jr. brought the field to the green flag. DeAngelis, Jr. wasted no time as he jumped out to the lead with last year’s winner, Austin Nason, and Dan Fredrickson up to second and third followed by Pollard and Paul Shafer, Jr.

On lap 10 Gabe Sommers passed Shafer, Jr. to break into the top five. Rich Bickle, Jr. moved into sixth on lap 16 when he worked his way around Shafer, Jr. On lap 18, Pollard powered his way past Fredrickson for the third spot with Ty Majeski taking the seventh spot from Shafer, Jr. one lap later. Five laps later Majeski would wrestle sixth away from Bickle, Jr.

Majeski continued his move forward when he passed Sommers for fifth on lap 30. On lap 33 he moved inside of Fredrickson to take over the fourth position. Majeski and Pollard then battled it out for third as the leaders continued to work their way around lapped traffic. On lap 45 Majeski took advantage of the slower traffic to work his way past Pollard for third.

The first caution flag came out on lap 53 when Shafer, Jr. spun on the backstretch. This meant the first opportunity for controlled pit stops. Most of the cars electing to pit were in the back half of the field with Fredrickson and Bickle, Jr. the only top ten cars at the time of the caution to pit.

For the restart on lap 61, DeAngelis, Jr. chose to start on the outside with Nason taking the inside of the first row. Majeski lined up outside and Pollard inside of row two. It was a good start for Nason who jumped out to the lead over DeAngelis, Jr.

This time for the restart Nason chose the outside with DeAngelis, Jr. on the inside. Nason retained his lead with Jacob Goede, Ryan Farrell, DeAngelis, Jr., and Casey Johnson making up the top five.

On lap 74 Goede looked to the inside of Nason but was unable to make the pass. Four laps later Goede and Nason made contact coming out of turn one causing Nason’s car to spin and bringing out the caution flag. For their roles in the incident, both Goede and Nason would go to the tail end of the lead lap cars.

For the restart Casey Johnson started on the inside of DeAngelis, Jr. with Farrell in third Andrew Morrissey in fourth and Jason Weinkauf in fifth. DeAngelis, Jr. was able to jumpe back out in front before the caution flag came out for a spin on lap 93.

This caution flag resulted in nearly everyone coming into the pits as the drivers were preparing for the final 100 laps.

Once again DeAngelis, Jr. chose the outside for the restart with Johnson on the inside followed by Morrissey and Farrell in the second row. This time Johnson would gain the advantage and take the point. DeAngelis, Jr. was able to wrestle back the lead from Johnson on lap 113 while Austin Nason, Jacob Goede, and Andrew Morrissey were third through fifth. DeAngelis, Jr. appeared to be getting stronger with each lap as he settled in out front.

A spin in turn two on lap 129 brought out the caution and took away some of the advantage DeAngelis, Jr. had built over Johnson and the rest of the field.

When the green flag waved again there would be ten cars still on the lead lap. DeAngelis, Jr. jumped back out to the lead followed by Johnson and Nason. However, the man on the move was Pollard who was up to challenge both Johnson and Nason. Nason would take second from Johnson with Pollard moving up to third and then overtaking Nason for second on lap 143. Despite being in the earlier pile up in turn three, Bickle, Jr. worked his way up to fourth ahead of Johnson before the caution flag came out on lap 147 when the car of Ricky Baker experienced mechanical issues.

The front row coming to the green would be Pollard on the inside with DeAngelis, Jr. on the outside. DeAngelis Jr. took the lead back for a lap before Pollard motored by to take over the top spot on lap 159. Bickle, Jr. was moving up fast as he took the second spot and began to chase down the leader.

Pollard and Bickle, Jr. separated themselves from the rest of the field while Nason, Murgic, and Johnson were battling for third.

With 25 laps to go Pollard’s lead was 1.4 seconds over Bickle, Jr. With ten laps to go Pollard had increased his lead to more than two seconds. Despite Bickle’s best efforts, he wouldn’t be able to catch Pollard who cruised to victory lane.

“I wanted to win this race for Joe. We raced together for 100 laps here back in 1985 with him right on my bumper. I’m probably the only one who raced with Joe who’s racing here today,” said Bickle, Jr. “I just want everyone to know I’m back.”

Nason, Johnson, and Nick Murgic rounded out the top five.