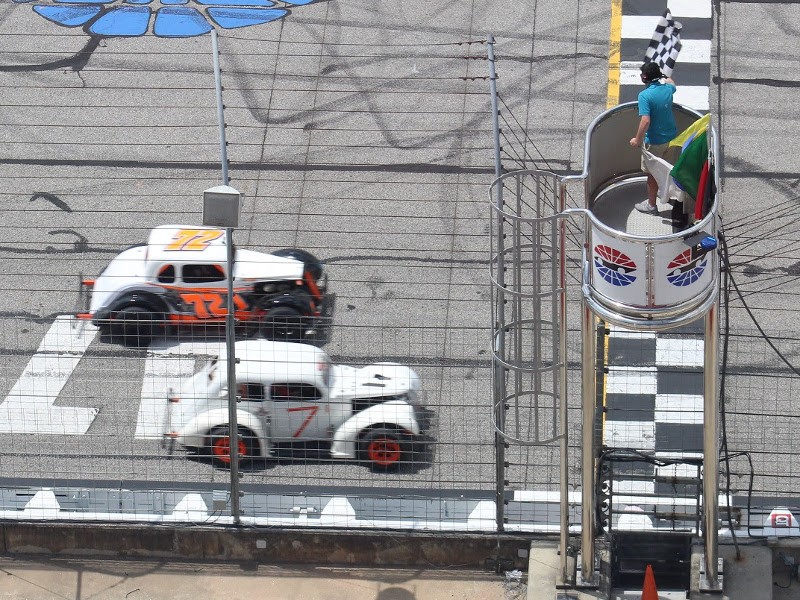 HAMPTON — The final Legends race before the return of Thursday Thunder on Atlanta Motor Speedway’s ¼ mile was full of intense racing.

Such close racing was capped off by a thriller of a finish in the Masters division, with three cars dueling for the win in the final laps. Phillip Young, Robbie Woodall, and a hard-charging Bill Plemons, Jr. were all over each other as they fought for the top spot. On the last lap, Woodall got a run on Young for the lead entering the final set of corners. Contact sent Young to the outside and opened the door for Woodall to charge to the stripe on the inside. The pair flashed across the finish line side by side, with Young just edging out Woodall to take the checkered flag.

Davis Rochester was stellar in the Pro feature, grabbing the pole and leading all 20 laps on the way to a dominant victory. Rochester was followed by Cale Hall in second and Taylor Jorgensen in third.

The Semi-Pros held nothing back in their 20 lap feature. The lead changed hands several times during fierce fights for the top spot. Contact on lap 16 shuffled up the running order, and when the dust settled Ian Hampton –who started seventh – was ahead of the field. Hampton took off on the final restart and put together four flawless laps to secure his first win in a Legends car, followed by Blaze Crawford in second and Trey Tadrzak in third.

There were scrappy battles throughout the Young Lions feature, in particular between Nathan Jackson and Timothy Watson. The duo dueled back and forth for the runner-up spot throughout the race, trading passes multiple times. Meanwhile, polesitter Lucas Ruark took advantage of that battle and gapped his closest challengers. Ruark took the checkered flag first, followed by Jackson in second and Watson in third.

Mason Maggio put on a clinic in the Outlaws Bandolero feature, winning the pole and leading all 20 laps on his way to victory. Behind Maggio was a spirited battle for second, with Kelley Puckett grabbing the runner-up spot and Shelby Ruark coming home third.

The first seven laps of the Bandits feature were led by polesitter Bryson Matthews, but that changed when Garrett Gumm shot to the inside to take the top spot away. Gumm showed the way from there, taking the victory after leading the final 13 laps.

Mitchell Flater started on the pole in the Rookie Bandolero feature, but Baylor O’Neil got the jump on the start to take over the top spot. O’Neil took off from there, leading all 15 laps on the way to victory.

The AMS Legends program’s weekly summer racing series Thursday Thunder returns with its first event of the season on May 30. More information can be found at AtlantaMotorSpeedway.com.