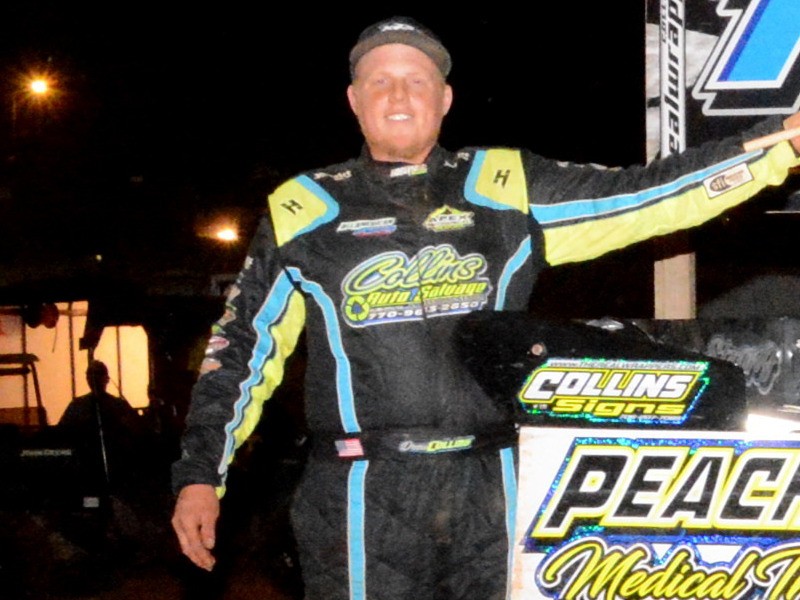 Now that he’s gotten a taste of victory at Toccoa, he seems to want to make it a habit.

Collins started on the pole, but was dogged on every lap by a persistent and very fast Drew Benfield. Collins held off the Toccoa native to score the win by a small margin at the end of the 25 lap feature. Jimmy Johnson came home in third.

In other action, Payton Freeman scored the victory in the FASTRAK Pro Late Model feature. The Commerce, Georgia native – and student at Commerce High School – led every lap after starting the feature on the pole. Frankie Beard finished in second, followed by Adam Smith in third.

Crandall Turner started on the pole for the Safety Plus 602 Sportsman feature, but saw his night go south on lap eight. Nick Sellers inherited the lead, and went on to score the victory. Former NASCAR ace Jeremy Mayfield finished in second, with Mark Wilbanks in third.

Sellers doubled up on the night with a win in the Modified Street division, with Billy Buffington and Sterling Helm rounding out the podium.

Bill Pulliam became the first three time winner at Toccoa this season with a in the Toccoa Pro Trucks feature. Terry Calhoun finished in second, followed by Preston Nicholson in third.

Ben Dunson scored his first ever Toccoa victory in the Stock V8 feature. Brady Hunt followed in second, with Daryl Sutton in third.