Michael Self singing in the rain with ARCA Salem victory 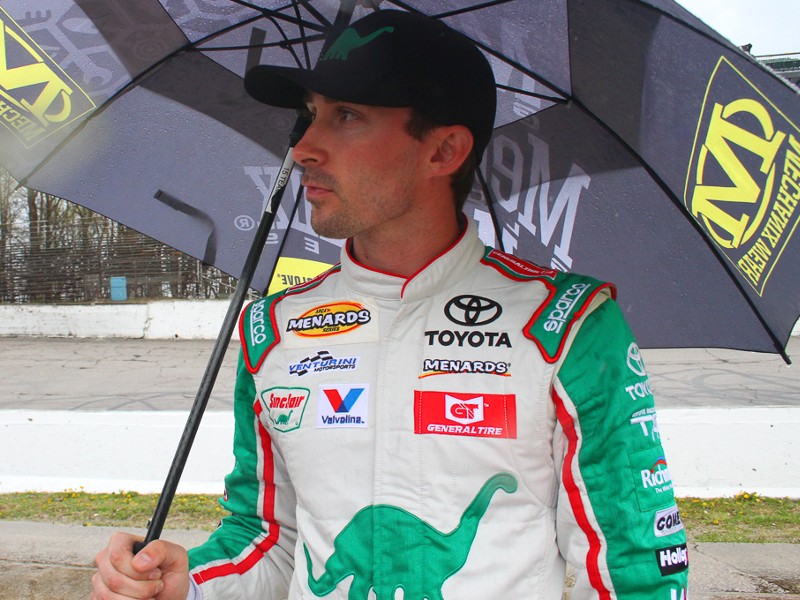 Self started fourth, took the lead at lap 27 and from there he dominated until Mother Nature intervened at lap 98.

“I owe all of this to my Venturini Motorsports guys,” Self said in a makeshift victory celebration. “We knew yesterday we were going to have a good racecar. We didn’t have a lot of qualifying speed but we knew once the race started, especially if it was cool and cloudy, that we’d be good.”

Self led handily over the rest of the field and with a long green flag run to open the race, he had lapped up to the third position. The first caution of the day waved at lap 89 when Ty Gibbs spun in turn two. With potential weather off in the distance, there was a decision to be made whether or not to hit pit road.

“There was no way we weren’t coming at that point,” Self said. “We had lapped up to third so we knew even if no one else came we would be third at worst. Tires make such a big deal here that even if we had just a few laps under green we knew we’d get back to the front pretty quickly.”

Self’s Venturni Motorsports teammate Chandler Smith stayed out to take the lead under the caution, but pitted with one to go.

“We just did that to hedge our bets,” team owner Billy Venturini said. “We knew rain was coming and we didn’t want another team to steal the win by not pitting. We left Chandler out until we knew we’d go back racing and then once the one to go was given we brought him down. Michael and the 25 team had the car to beat today and as far as we’re concerned the race ended up the way it should have. It didn’t matter if we ran 300 laps today, no one was going to beat them.”

Sam Mayer finished a career-best second. He avoided multiple opportunities to get tied up in incidents on his way to the finish.

“Starting a little further in the back we had a lot of chances to get caught up in some of things,” Mayer said. “It was a little adventurous but Mardy Lindley and the GMS Racing guys gave me a great car. It took me a while to get used to the race track but once we got it figured out we were pretty fast.”

Carson Hocevar started from the General Tire Pole and led the first 27 laps before Self worked past for the lead. Hocevar then went into tire conservation mode, saving tires while he planned on a late race dash to the checkered. The rain ruined Hocevar’s strategy, leaving him third at the finish.

“We were just riding around there saving tires,” Hocevar said. “I wish we could have run all 200 laps because I think we could have given the 25 a run for his money.”

Series points leader Christian Eckes was scheduled to start from the second position but was withdrawn from the race by his Venturini Motorsports team just hours before the race with an undisclosed illness. Eckes was replaced by Daytona winner Harrison Burton. After dropping to the tail of the field for the start, Burton worked his way through the pack to finish eighth.

Travis Braden scraped the wall near the 80-lap mark and lost several laps on pit road to affect repairs. Despite the finish, Braden assumes the unofficial ARCA Menards Series championship lead by just five points over Self and by just 20 points over third place Bret Holmes.

Next on the schedule for the ARCA Menards Series is the General Tire 200 at Talladega Superspeedway on Friday, April 27. For more information, visit ARCARacing.com.