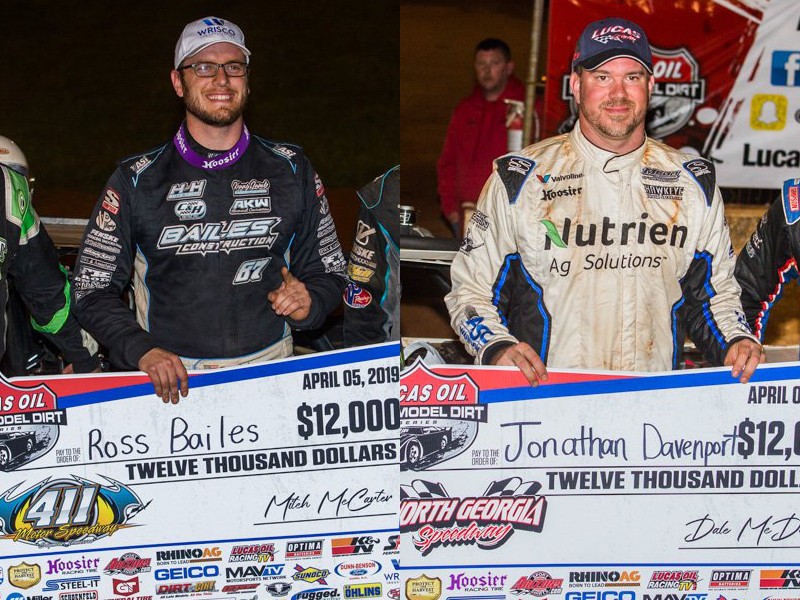 Bailes took the victory on Friday night at 411 Motor Speedway in Seymour, Tennessee, while Davenport scored a home state win on Saturday night at North Georgia Speedway in Chatsworth, Georgia.

The 29-year-old, South Carolina native led all 50 laps en route to one of the biggest wins of his career.

Bailes took the lead at the start of the race, withstood several cautions, and managed to hold off a late race charge from three other drivers to become the sixth different winner of the 2019 season.

“This seems unbelievable,” said Bailes. “We have tried for so long to win one of these and we just couldn’t get it done. To come to a new place like this and to get it done here is just unimaginable. I felt good on the bottom and then when I got to lapped traffic I was slowing down. I knew I needed to search around and do something different. My crew guys told me to move up and when I did the car felt really good up there.”

On Saturday night, the Lucas Oil Late Model Dirt Series returned to North Georgia Speedway for the first time since 2009. Blairsville, Georgia’s Jonathan Davenport conquered the red clay oval for his fourth victory of the season.

Davenport took control on lap 20 by darting under race leader David Payne. Payne then ran second to Davenport before he suffered a flat left rear tire on lap 25 forcing him to pit. Devin Moran picked up the chase for the lead and challenged Davenport several times before fading.

Tyler Erb, who entered the event second in points to Davenport, then moved into the runner-up position. Erb was attempting to track down Davenport but on lap 37 he hooked the cushion and spun to a stop, forcing a caution flag.

The final caution of the race came on lap 42. Davenport then led the rest of the way for a convincing victory in front of his home-state crowd. With the win, Davenport maintains his championship point lead.

Davenport was jubilant in victory lane before an appreciative crowd.

“I was kind of glad to see a few of those cautions. I was needing a water break,” Davenport said jokingly. “I have never won a late model race here. This is so fun to come back to almost my hometown crowd and get this win. I grew up just an hour-and-a-half from here. My crew chief is Jason Durham, this is a big win for him as well. This is basically his home track.”

Don O’Neal had his best finish of the year by taking second with Josh Richards finishing third. Moran and Earl Pearson, Jr. rounded out the top five.