No. 4 Georgia slams No. 5 Vanderbilt 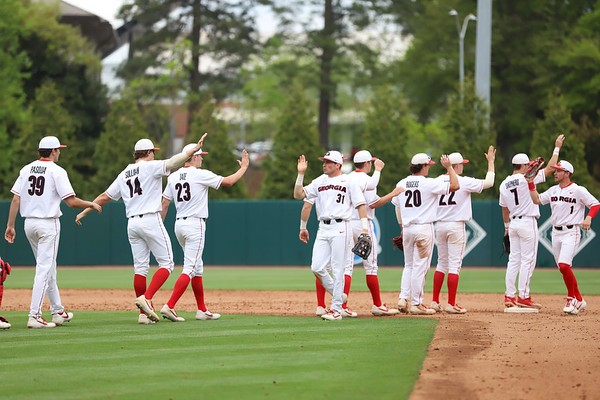 ATHENS — Fourth-ranked Georgia bounced back to defeat fifth-ranked Vanderbilt 8-3 Saturday in front of a Foley Field crowd of 3,117.

Georgia’s (26-6, 8-4 SEC) win forces a Sunday rubber match against the Commodores (25-7, 8-4 SEC) as the Bulldogs chased ace Patrick Raby (5-1) after three innings after he allowed six earned runs on six hits. The Commodore sennior had surrendered just five earned runs all year in 37 innings for a 1.22 ERA. Bulldog sophomore left-hander C.J. Smith (3-1) pitched a career-high seven innings for the victory.

“The tone was set by C.J. Smith. He was really good on the mound," Georgia coach Scott Stricklin said. "Vanderbilt’s lineup is really good but he just kept them off balance with a lot of changeups and fastballs inside. He got us through seven innings, which was huge because our bullpen was a little short today."

Smith admitted it was a nice turnaround after last week's rough outing against Kentucky.

“It feels great," Smith said. "Last week I really struggled with my command, and being able to settle in today was really nice. I felt really good out there.”

The Commodores took a 1-0 lead in the second inning as Harrison Ray hit a solo home run into the trees behind the left field fence. However in the bottom of the second inning, senior second baseman LJ Talley answered with a solo home run of his own, this one into the trees in right center field. The Bulldogs were not finished in the inning. After loading the bases, freshman left fielder Randon Jernigan hit a sacrifice fly to right field as the Bulldogs took a 2-1 lead.

In the third inning, Georgia added a run when graduate designated hitter John Cable hit a sacrifice fly, extending its lead to 3-1. Georgia started the fourth inning with singles from, freshman first baseman Chaney Rogers, Jernigan, and junior center fielder and former Dawson County standout Tucker Maxwell. This set up Georgia with the bases loaded, while also chasing Raby. The stage was set for sophomore right fielder Riley King (2-3, 4RBI, 2 runs scored), as he demolished an offering from sophomore reliever John Eder, into the parking lot for a grand slam, giving Georgia a 7-1 lead.

"LJ Talley got us back on the board with his big home run and even up the game. Riley’s grand slam gave us some separation and some cushion but against Vanderbilt no cushion is too big," Stricklin said.
Vanderbilt managed another solo home run, this one from senior Julian Infante, making the score 7-2.

In the sixth inning, the Bulldogs tacked on another run when Jernigan scored on a wild pitch for an 8-2 lead.  The Commodores were able to score one more run in the ninth inning, but it was not enough to surpass the Bulldogs lead.

After Smith provided seven innings of three-hit baseball, the Bulldogs looked to freshman Cole Wilcox. He struck out five over the final two frames and allowed one run on two hits. Eder went the rest of the way for Vanderbilt, giving up two runs on five hits in five innings. In Friday's opener, Vanderbilt edged Georgia 3-2 in 11 innings.

Dawg Tracks
-- Sophomore C.J. Smith set a new career high of seven innings pitched.
-- After his solo shot in the second inning, senior LJ Talley now has five home runs on the year. With a single in the third inning, he now has 15 multiple hit games on the season.
-- Sophomore Riley King hit his fifth home run of the season in the fourth inning, with a monster grand slam. This was Georgia’s sixth grand  slam on the year, and today it won a fan $5,000. It was the first time since 2008 that the promotion was achieved.
-- With a single in the second and fifth inning, graduate John Cable had his fourth multiple hit game in a Bulldog uniform.
-- Junior Tucker Maxwell has reached base safely in the last eight games – the longest current streak on the team.
-- Freshman Randon Jernigan stole two bases. He is now 10-11 in stolen base attempts on the season.

Up Next
Georgia and Vanderbilt conclude the series Sunday with first pitch scheduled for 12:02 p.m. at Foley Field in a game televised by the SEC Network.

No. 4 Dogs fall to No. 5 Vandy in series opener
Fourth-ranked Georgia fell 3-2 in 11 innings to fifth-ranked Vanderbilt to open an SEC series Friday at Foley Field in front of a crowd of 3,188...
By Georgia Sports Communications
Privacy | User Agreement | Contact | Advertise With Us
2021 © Jacobs Media Corporation. All rights reserved. EEO Report. Website by Full Media
Login / My Access
close
Search