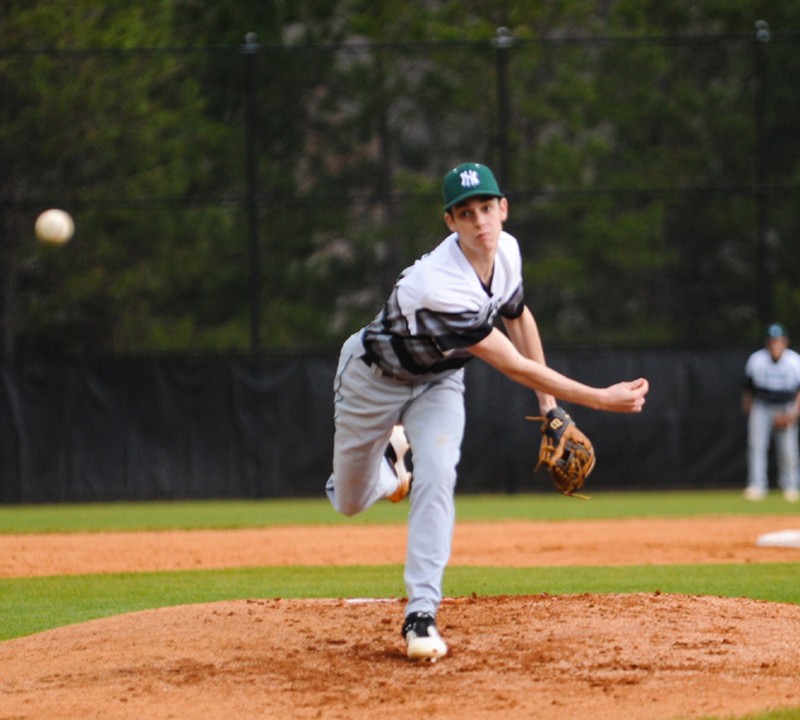 DAHLONEGA — The North Hall baseball team added another Region 7-3A win to the column Monday afternoon on the road.

The Trojans (12-8, 11-2) churned out four runs in the fourth inning to win game one of the three-game series against region foe Lumpkin County, 4-1. It was North Hall's 10th win in the last 11 games.

With the win, the Trojans remain at the top of the region standings and are on a collision course with Fannin County for the top seed out of the region in a three-game series next week.

Wes Tadman earned the win on the hill for the Trojans, going the distance with eight hits and four strikeouts.

Caleb Wiley put the Trojans on the board in the top of the fourth inning when he doubled in Caleb Clark. Later in the inning, Caleb Payne singled to centerfield scoring Wiley and Jackson Dyer. Dylan Wiley scored Tyler Brooks a batter later, giving North Hall the 4-0 advantage.

Payne, Dylan Wiley, Caleb Clark and Caleb Wiley were all 2-for-4 at the plate. Payne drove in two runs while Caleb Wiley and Dylan Wiley had an RBI each.

The Trojans racked up four runs on nine hits.

The two teams will be back in action for game two of the series Wednesday at Jody Davis Field in Gainesville. Game time is set for 5:55 p.m.

The Wolves (13-7, 3-1) jumped out to a four-run lead in the top of the second inning to pace them to the non-region win over Class 7A Lambert Monday afternoon on the road.

Lambert made things interesting in the bottom of the sixth inning, scoring two runs to pull within one run, 4-3.

Buford, however, hammered out five runs in the top of the seventh to push the lead out of reach.

David Ramsey grabbed the win on the mound for the Wolves, allowing three runs on four hits and six Ks. Brandon Joliff went one and two-thirds innings of work, giving up on run on three hits and two strikeouts in relief.

Austin Turner led the way at the plate with a 3-for-4, 1 RBI day for the Wolves.

Brandon Joliff, Eli Ledford, and Riley Stanford were 2-for-4 in the batter's box. Pat Walker, Kaleb Elder, Evan Place and Joseph Salvo had one hit each.

Buford will travel to Brookwood Wednesday. First pitch is 5:55 p.m.

Elbert County would score one in the third, fourth and sixth inning.

Nate Ray picked up the win for the Tigers. He gave up three runs on six hits and two strikeouts in five and one-third innings. Tucker Maloch earned the save, allowing no hits or runs and striking out one in one and two-thirds innings of work.

Hayden Hutto was 3-for-3 with two RBIs for the Tigers. Colby Rogers and Kody Mintz were 2-for-4 with an RBI each and Evan Davis was 2-for-3 at the plate.

The Tigers will return to Region 8-A play Tuesday at Prince Avenue. Game time is 5:30 p.m.

Apalachee scored seven runs in the bottom of the second inning to shock the Red Elephants (7-13, 2-5) and stroll to the win Monday afternoon in Winder.

Gainesville's offense struggled all day only scoring four runs, two in the first and two in the third.

Dalton Kyle was 3-for-4 with one RBI in the loss. Harris Bell, Shawn Gregg and Riley White also drove in a run for the Red Elephants.

Apalachee, Gainesville and Dacula are in a three-way tie for the fourth spot in Region 8-6A.

The two region foes will be back in action on Wednesday at Ivey-Watson. First pitch is 5:55 p.m.