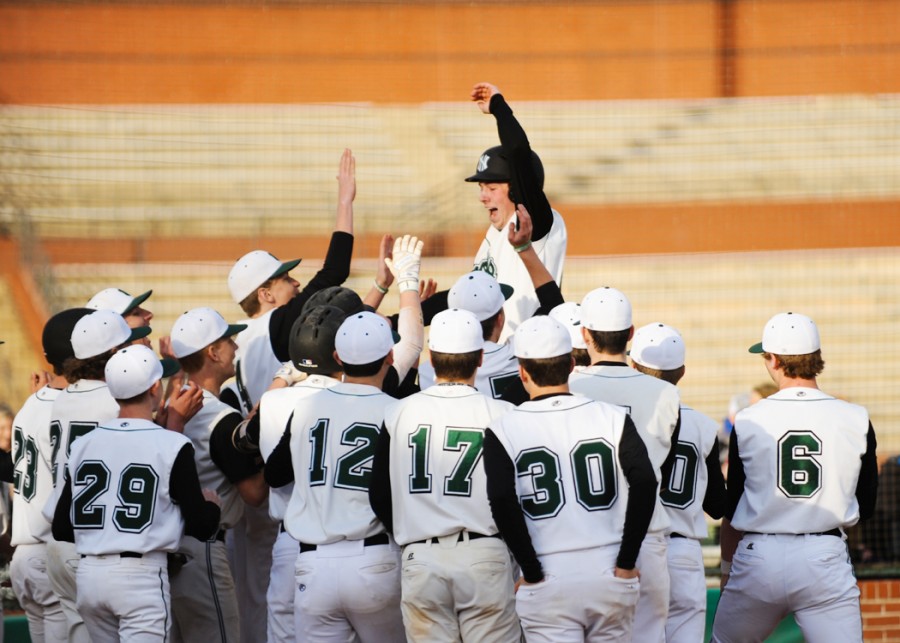 North Hall's Caleb Clark (center) gets mobbed by his teammates after hitting a home run Monday in the Trojans' 10-0 win over Cherokee Bluff at Jody Davis Field.
Photo/Jim Haynes

GAINESVILLE — Every coach in every sport always says they are waiting for that perfect game. None every truly witnesses one.

But North Hall’s 10-0 Region 7-3A win over Cherokee Bluff in six innings Monday at Jody Davis Field had that feel afterwards for Trojans’ coach Trevor Flow.

“I thought that was probably our most complete game of the year so far,” Flow said after the Trojans pounded out 12 hits, including a pair of two-run home runs and 5 RBI from Caleb Clark. North Hall also got a complete-game effort on the mound from Clark, who scattered three hits and fanned five.

“You never have a perfect game but that was as close as we’ve come this year,” he said. “I didn’t think Caleb had his best stuff on the mound but he mixed things up well. He had a great night at the plate.”

Both Flow and Clark said last week’s sweep of Greater Atlanta Christian in region play may have been just what the Trojans (7-7, 6-1 Region 7-3A) had been waiting on after a 1-6 start against many of the state’s elite. Now, they are working on a five-game winning streak.

“The GAC sweep was very big for our momentum,” Clark said. “That was a big confidence boost for a lot of the guys.”

“The GAC series I think carried us into this game,” Flow said. “I hope we’re not peaking. But I do feel we’re playing very well right now. We just want to try and keep it going by taking one at a time.”

The win for the Trojans kept pressure on first place Fannin County, who was the only unbeaten team left in region play coming into Monday's action. The Rebels will open a three-game series with Lumpkin County on Tuesday.

Cherokee Bluff (8-6, 4-3 Region 7-3A) got the start it wanted in the first when Dylan Kautz reached on an error and eventually moved to third on an errant pickoff attempt by Clark and a stolen base. But Kautz was gunned down at home to end the inning trying to score on a double steal attempt after Parker Shope walked with two out.

North Hall used that momentum to strike first. Clark singled to lead off the first and later scored on a RBI single by Jackson Dyer. Caleb Wiley, who walked with one out, scored on a Tyler Brooks double for a 2-0 lead but Bears’ starter Parker Shope got out of the inning with a fielder’ choice and a lineout to center to minimize the damage.

The Trojans continued to batter Shope in the second as Zack Warwick singled and then scored in front of Clark’s first home run to right for a 4-0 lead. Caleb Wiley and Dyer both singled with two out but were left stranded.

North Hall added another run in the third on Clark’s third hit in as many innings driving in Caleb Payne for a 5-0 lead and made it 6-0 in the fourth on Payne’s RBI single scoring Dyer, who doubled to lead off the inning.

Meanwhile, Clark got stronger on the mound as the game went on. He retired eight straight and 9 of 10 at one point in the middle innings. He allowed just one baserunner after the third, which came on his own fielding error.

The North Hall offense never let up as Clark belted his second two-run of the game, his fourth of the season, in the fifth for an 8-0 lead. That marked the end of the day Parker Shope, who went 4 1/3 surrendering 12 hits and walking one while striking out two. Seven of the eight runs he allowed were earned.

Shope was relieved by Ashton Balizet, who retired the first two batters he faced to get out of the fifth. But North Hall got a pair of hits by Dyer and Tyler Brooks and walk of Payne to load the bases with no one out in the sixth. Warwick singled in Dyer and Tyler Brooks scored the clincher on a sacrifice fly by Tate Brooks.

Clark said the offense is beginning to jell.

“We definitely hit the ball well today. Our approach was good in that we were trying to stay back and wait on the breaking pitches,” Clark said. “I think we’re starting to take steps in the right direction.”

The two teams will head to Cherokee Bluff on Wednesday to resume their three-game series. They will return to North Hall on Friday.