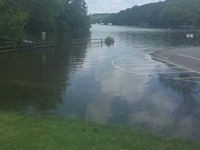 With most places in the Chattahoochee River Basin getting several inches of rain the past few days, the level of Lake Lanier is on the rise again and the U.S. Army Corps of Engineers has begun closing boat ramps and other amenities around the lake.

As of 6:00 Thursday evening, these ramps had been closed, according to a posting on the Corps' Lake Lanier Facebook page:

Additionally, the following parks/trails have been closed:

Thursday afternoon the lake level was more than four feet above winter full pool, which is 1070.  The level of the lake at mid-afternoon was 1074.31.

The scenario unfolding Thursday was not unlike what occurred in late December and early January when north Georgia suffered round after round of torrential rains, pushing the lake well-above-normal levels and washing a large amount of debris into the lake from upstream.

Meanwhile, dock owners are being reminded to pay close attention to the condition of those structures and the water around them.   (See separate story.)