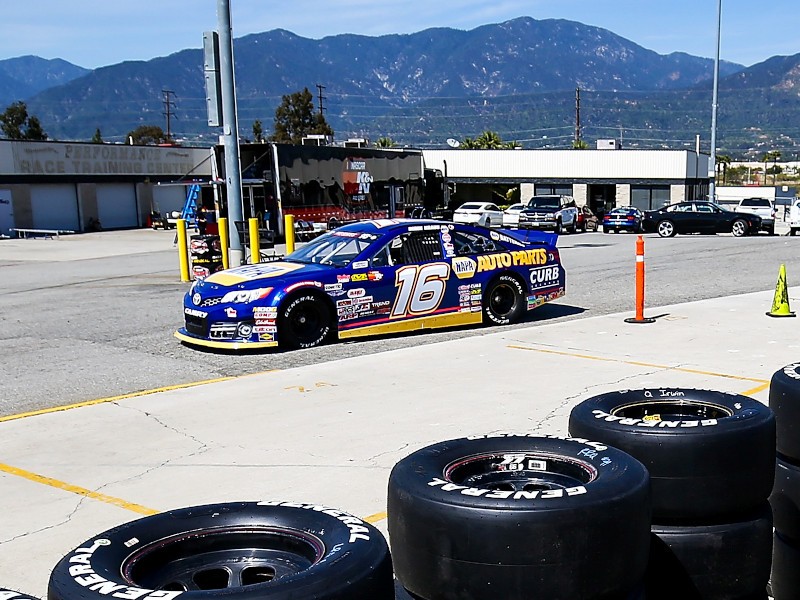 This NASCAR K&N Pro Series West season had its fair share of twists and turns – literally.

From local short tracks, to road courses, venturing to the Midwest and everything in between, 2019 gave us plenty of memories, including some jaw-dropping moments, to reflect on.

The 65th K&N West season kicked off with a bang — and on the dirt.

After starting fourth in his first series start, Jagger Jones took the lead on lap 69 of 100 and didn’t look back … until a lapped car got in the way.

The rookie let the lead slip away on the final lap, allowing Hailie Deegan to slide by and earn the dramatic victory in the season opener, her second career win to date.

“If I was him, I’d be mad. Really mad,” Deegan said of the lapped cars. “But some peoples losses are other peoples wins and we ended up getting it done. I knew what we had to do to win. I knew it was going to come down to the last lap again and we made it happen.”

After a one-year hiatus, the K&N Pro Series West made a triumphant return to one of the most famous racing venues on the West coast: Irwindale Speedway. And it was another thriller.

Trevor Huddleston beat Tanner Gray to the line by 0.030 seconds to win his first career race at the track his father, Tim, operates.

And smacked the wall after the checkered flag with a flat tire, to boot.

“That was absolutely insane,” Huddleston said. “Me and (Gray) were bouncing off each other, we were bouncing off the wall, I mean I didn’t know if we won. I hit the wall and got the freakin’ wind knocked out of me and I was like ‘did we win?’ and we won. Unbelievable.”

After leading the most laps at both Las Vegas and Irwindale but coming up short of the victory, Kraus decided Tucson Speedway was where he’d announce his presence with authority.

After starting on the outside pole in Twin 100 No. 1, Kraus led flag-to-flag for his first win of the 2019 season, beating Gray by over four seconds.

And in Twin 100 No. 2, he led the most laps (39) again, sweeping the evening in the desert and taking over the points lead while his Bill McAnally Racing teammate Deegan struggled.

“That was really good and we’ll look to stay consistent the rest of the season,” he said. “We just had to stay patient and it paid off at the end.”

It was another night with BMR cars up front, as Deegan led a race-high 66 laps. But she’d led only 65 going into the final overtime restart.

Kraus took the top spot from her and led lap 154. But Deegan was going to do whatever it took to make sure he didn’t lead the last one.

“Derek (Kraus) ran me hard right there (turn 2), so I was going to run him hard back (turn 4),” she said.” And that’s racing. We were all going for the kill. I got the win and that’s all that matters.”

Kraus went to social media to vent his frustrations, saying “mama always told me if you have nothing nice to say, say nothing at all!”

In one of the most anticipated races of the year, Wine Country as well as the twists and turns of Sonoma Raceway awaited the K&N Pro Series West.

The largest field of the season (32 cars) included five national series regulars, who dominated most of the afternoon. Cup rookie Ryan Preece led the most laps (33), but wound up finishing 20th after being black flagged for a restart violation in overtime.

That handed the win over to Noah Gragson, who passed Daniel Hemric on the final restart and led 24 laps on the afternoon, earning his fifth career K&N West win. He also overcame a restart violation earlier in the race, but had a lightning-quick Jefferson Pitts Racing Chevrolet.

After coming back from three laps down due to engine issues, Kraus rebounded to be in line for a top 10 finish, only to spin off course on the final lap. He finished 19th and maintained the championship points lead.

After leading 133 laps but falling short of the win in 2018, Kraus led flag-to-flag again and earned his third win of the season.

“They know what they’re doing when we come here to Roseburg,” he said. “I’m just fortunate enough to be able to be driving the race car.”

In the first of two combination events for the K&N Pro Series, the West only put two drivers in the top 10 (Kraus, fourth, and Huddleston, eighth). Sam Mayer, eventual K&N East champion, won the event, leading all but eight laps.

However, Kraus’ top five run showcased what his BMR team was made of, recovering from a early race spin. Coming into Iowa, Kraus was competing for dual championships and was leading both.

Starting second, Huddleston led a race-high 85 laps in what was one of his more impressive performances of the season, earning his second career win.

Kraus came home second and Brittney Zamora led a career-high 45 laps from the pole, earning her career-best finish of third.

The second combination event followed the weekend after Evergreen in St. Louis, where another East competitor in Spencer Davis earned the victory.

Kraus came home in second with three other K&N West regulars inside the top 10. But not without controversy, as he and Deegan made contact in the closing stages.

The series’ annual trip to Idaho resulted in a familiar result: a Kraus victory.

But it didn’t come without more controversy, as he bumped Jagger Jones out of the way with three laps remaining in regulation for the lead.

Kraus held on for the win, his fourth of the season, one year after leading almost 190 laps at the same track.

“I’m sure he’s not very happy with me, but that’s racing,” Kraus said of the incident with Jones. “I’ve been on the other end of that and I know how it feels with Colorado. I’m sure he’s mad, and I’m sorry about it, but I guess that’s short track racing.”

Jones led a race-high 96 laps and earned his first career win after two runner-up finishes in 2019.

Deegan rebounded for second after an early race spin after contact from Jones, while Kraus’ fourth-place finish after a flat tire left him with a 40-point lead in the standings with two races to go.

In the house that Kraus dominates, he did so once again at Kern County Raceway Park, leading all 155 laps.

And when the green flew, Kraus was officially deemed the champion.

In a race dominated by K&N East regulars, Ty Gibbs took the lead from Mayer on a restart and didn’t look back surviving a handful of restarts to earn his second overall series win.

And thus, the checkered flag flew on the 2019 season and the K&N Pro Series era.

K&N Filters served as the entitlement sponsor for the series from 2010-2019, as the series will be rebranded as the ARCA Menards Series West beginning in 2020.