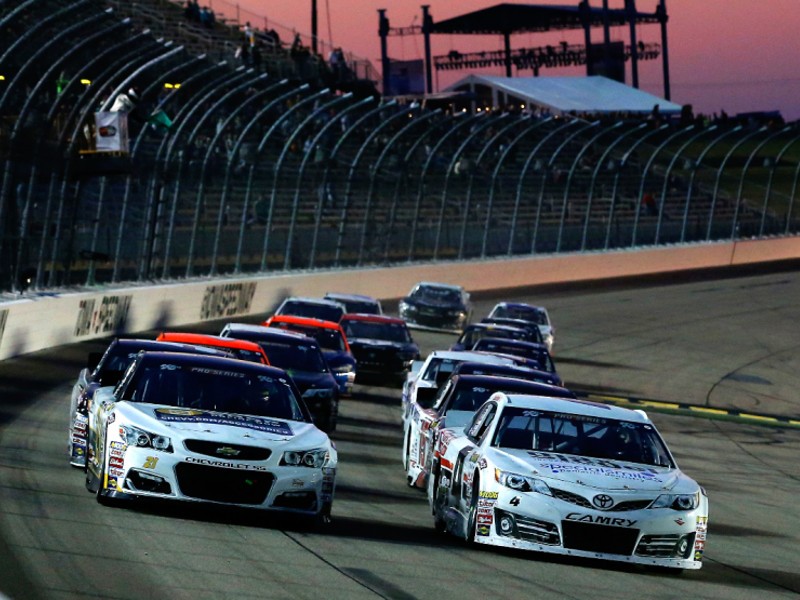 This K&N Pro Series East season wound up being dominated by one driver in particular, but that didn’t mean storylines throughout the year were lacking.

Including a plethora of national series venues along with some grassroots stops, 2019 gave us plenty of memories, including some jaw-dropping moments, to reflect on.

The season kicked off with a K&N Pro Series West regular spoiling the party, as Derek Kraus earned the victory, leading a 40 laps. But the East regulars showed out, too. Colin Garrett led a career-high 64 laps, Drew Dollar led a career-high 48 and Chase Cabre led 13 before a rear-end issue ended his night.

The 175-lap race was postponed a day due to rain, and wound up being a waiting game. Who could save their one set of tires the best? It wound up being Kraus.

“What really helped me (save tires) was running with Todd (Gilliland) for three years,” he said. “He was really good at saving tires. I just tried to remember back then and that’s what I felt like I did. I probably didn’t save the right front as well as I needed to because I was driving it in pretty deep, but I felt like I saved as well as I could. Brandon (McReynolds) and Hailie (Deegan) I know dropped way back, I didn’t feel comfortable dropping that far back, because track position is huge here.”

Coming off a fourth-place result in Florida, Sam Mayer had to wait two months before getting back behind the wheel of his GMS Racing machine. But when he did at Bristol, it was a rocketship.

On lap 1 of the race, multiple contenders were involved in a crash, ending their afternoons before it had a chance to begin.

Twin 100s at one of the most famous race tracks in the Southeast didn’t disappoint, as an overtime finish resulted in rookie Tanner Gray of DGR-Crosley earning his first career checkered flag.

“It feels really good to get that first win,” Gray said after leading a race-high 79 laps. “I tried to screw it up throughout the race the whole time. I just kept getting loose, chasing it up the race track and made some adjustments there under caution before the green/white/checkered.”

Mother Nature forced the postponement of the second race to Sunday. Just as was the case at New Smyrna, Kraus didn’t mind waiting.

He earned his second victory of the season leading 52 laps.

A trip to the Bluff City resulted in a first-time winner, as Cabre broke through and earned his first career K&N Pro Series East win in his third full-time season.

The decisive move came on a restart following the break, as Cabre dove underneath Mayer, causing contact with Max McLaughlin, who had led a race-high 86 laps.

“I’m so damn pumped up,” Cabre said. “It’s been a long time coming. Three years and coming up second a handful of times, it’s so good to come out on top. My crew gave me a good car, I’m really thankful for the opportunity. God’s a good man and finally brought us home a win today.”

And Cabre stayed hot, winning the very next race at New Hampshire Motor Speedway leading all but 10 laps from the pole to vault himself into the thick of the championship conversation.

“Makes a statement to let everybody we know we’re not here to play, we’re here to win,” he said. “We gotta take advantage of opportunities when we get them. Today was a good day for us.”

Mayer and Kraus were engaged in a fierce battle for second as the checkered flag flew. Up until this point, Kraus had competed in all K&N East and K&N West races and led both standings, gunning for dual championships.

Mayer dominated at “The Fastest Short Track On The Planet” leading all but eight laps en route to the victory.

Being a combination event, Mayer earned more points than usual with the win. Plus, Kraus’ troubles allowed him to take the lead in the standings for the first time in the season.

Another dominating performance occurred on the schedules only road course of the season, albeit from a driver who had zero laps of experience on road courses coming in.

McLaughlin led every lap from the pole (after being quickest in practice) and won at his home track, defending Hattori Racing Enterprises’ victory from The Glen in 2018.

In a race dominated by Dawsonville, Georgia’s Spencer Davis, it was Mayer who once again earned the trophy.

The GMS Racing driver took the lead from Davis with 13 laps to go as the top five were nose-to-tail for the last 20 or so laps.

The story of the event, though, was what happened on the initial start. Mayer and Cabre, documented rivals to this point in the season, had their biggest run-in of 2019 on lap 1.

The move sent Mayer to the rear for aggressive driving, and wound up sending Cabre to the hospital with back pain. But the checkered flag belonged to the Wisconsin native, and his championship pursuit became clearer.

Spencer Davis got his revenge the next race, earning his first win in over 1,100 days in St. Louis. He bested Mayer on the final restart, as NASCAR called the race early due to time constraints.

Being a the second combination race of the season, Kraus and Hailie Deegan had a run-in on track which resulted in Deegan’s tire going flat. She finished ninth, while Kraus finished second.

Mayer’s fourth-place run, coupled with Cabre’s problems during the break despite leading 67 laps, was plenty enough to position him well going into the final two races of the year.

Mayer’s lead in the standings ballooned to 30 leaving NHMS, meaning all he had to do at Dover was start the race to win the championship.

As soon as the green flag flew, Mayer was officially the 2019 K&N Pro Series East champion. But they still had unfinished business.

After leading all but two laps, their business was finished he and GMS Racing earned their fourth win of the year together, closing out 2019 with a bang.
And thus, the checkered flag flew on the 2019 season and the K&N Pro Series era.

K&N Filters served as the entitlement sponsor for the series from 2010-2019, as the series will be rebranded as the ARCA Menards Series East beginning in 2020.