Doug Coby & Whelen Mods have a season to remember 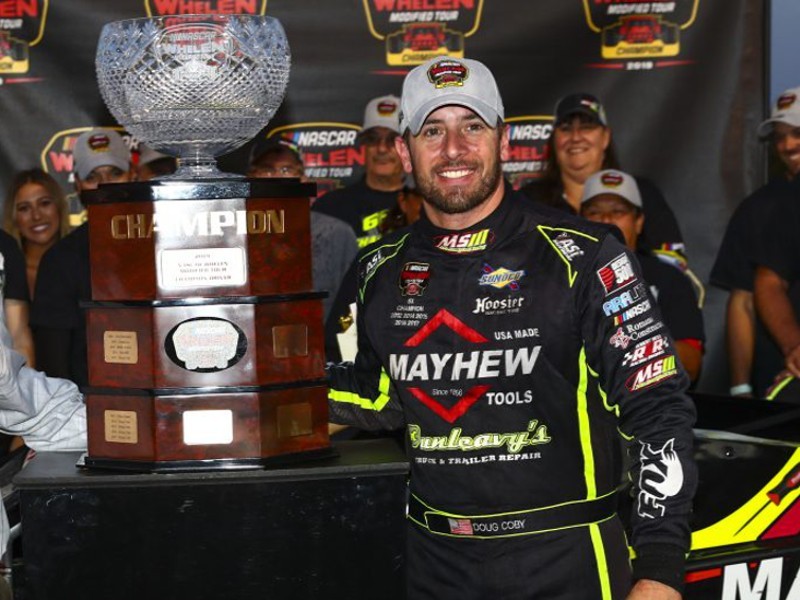 Doug Coby continued his historic run, Justin Bonsignore made a late run, the NASCAR Whelen Modified Tour announced not one, but two, big venues for 2020, and the Modified community lost a legend.

The 2019 season was one to remember, for a lot of reasons.

What Doug Coby has accomplished in his Whelen Modified Tour career is incredible. When you consider that the Milford, Connecticut, driver has put together a resume worthy of the NASCAR Hall of Fame despite having just one tour win prior to turning 32, it’s even more impressive.

All Coby has done in the last eight years is win 26 times with 72 top fives in 120 starts. That’s a win every 4.6 races. And his 2019 championship meant he became just the 13th driver in NASCAR history to win six or more national or touring series championships. That’s a list that includes the likes of Richard Petty, Dale Earnhardt, Richie Evans and Mike Stefanik.

“It’s really just hard to put into words,” Coby said. “We try to come out here to win every race and try to come out to have the best season of anyone, and our team just finds a way to do it. I don’t talk about numbers, and think about numbers — I have a long way to go in my career, and this could be it. I always try to remember that my last win could be my last win, and my last championship could be my last championship. Well earned by my team, I will tell you that much.”

What comes next is up in the air, as Coby’s long-time car owner, Mike Smeriglio III, announced in the offseason that he was stepping away from the sport to spend more time with his family. Suffice to say, though, wherever Coby lands in 2020, he’ll be a threat for title No. 7.

As Coby was moving closer to what is considered one of the most untouchable records in NASCAR – the nine championships won each by Evans and Stefanik — the Modified community mourned the sudden loss of Stefanik in September.

Stefanik, who retired from racing in 2014, passed away from injuries suffered in a small single-seat plane crash at the age of 61.

“He recorded achievements in this sport that are likely untouchable, and his legacy as a champion will endure,” said NASCAR Chairman and CEO Jim France as part of a statement following Stefanik’s passing. At the Full Throttle Fall Weekend at New Hampshire Motor Speedway later in September, Max McLaughlin (NASCAR K&N Pro Series East) and Timmy Solomito (NASCAR Whelen Modified Tour) ran tribute paint schemes on the cars to honor Stefanik.

Prior to the start of the Musket 250, the Modified drivers had another tribute to the legend.

Stefanik is also a six-time nominee for the NASCAR Hall of Fame.

When the 2020 schedule was announced, it contained many of the key dates and venues that have made the NASCAR Whelen Modified Tour a vital part of the fabric of the northeast racing scene. There’s the annual Icebreaker and World Series of Asphalt Racing stops at Thompson Speedway Motorsports Park, and the Spring Sizzler and Fall Final at Stafford Motor Speedway. Add in the Full Throttle Fall Weekend and a summer date at New Hampshire Motor Speedway, include return trips to tracks like Seekonk, Riverhead, Wall and Oswego, and the new addition of Jennerstown, the 2020 championship is sure to be decided on the region’s top short tracks.

The season will again open with a southern race: Saturday, March 21 at historic South Boston Speedway.

The biggest news, though, came during the season when two road trips were unveiled: Something old and something new.

In May, it was announced that first time since 2010, the NASCAR Whelen Modified Tour will return to Martinsville Speedway in 2020 for the MaxPro Window Films 200. The modifieds, which were a fixture at Martinsville for decades, will race the 200 lap race on Friday Night May 8, 2020 as part of the spring race weekend.

In July, Iowa Speedway announced that the “Fastest Short Track In The World” will host the tour for first time during NASCAR Xfinity Series U.S. Cellular 250 weekend.

Following his championship run, Coby participated in a Hoosier tire test at Iowa, officially becoming the first Whelen Modified Tour car to hit the high banks in the Heartland.

Bonsignore didn’t have the start to his Whelen Modified Tour championship defense he has hoped for.

After five races, he was seventh in the standings – a distant 37 points behind Coby.
Nowhere was Bonsignore’s mastery behind the wheel and will to win more evident than the tour’s two races at his home track, Riverhead Raceway on Long Island.

In the first race, Bonsignore got the best of track regular John Beatty Jr. in a wild overtime scrum that saw Bonsignore spin across the finish line to grab the win.

In the return trip, Bonsignore again got the best of late-race restart to claim yet another Riverhead checkered.

Craig Lutz came up short in the NAPA Spring Sizzler 200 in May, leaving him one spot shy of Victory Lane for the second straight race at Stafford. When the tour made its annual Fall stop at the historic half-mile, though, Lutz finally got that elusive win.

“The first win is always special,” Lutz said. “Everyone kept on asking me when it was coming. To finally knock one off, it’s an amazing feeling.”

Lutz finished fourth in the championship standings, one spot behind a resurgent Ron Silk. Silk, the 2011 tour champion, ran just his second full season since 2014. His pairing with car owner Kevin Stuart resulted in three wins, including the second race of the season at South Boston.

In February, Mayhew Tools became the title sponsor for the pole award. The Massachusetts-based company that produces tools that serve the industrial, automotive and hardware industries, took the race award presentation a step further: in addition to the check and the plaque for the driver, Mayhew produced a “Big Stick” to each crew chief who turns the wrenches on a pole winning car. The “Big Stick” is the largest pry bar that Mayhew has ever created.