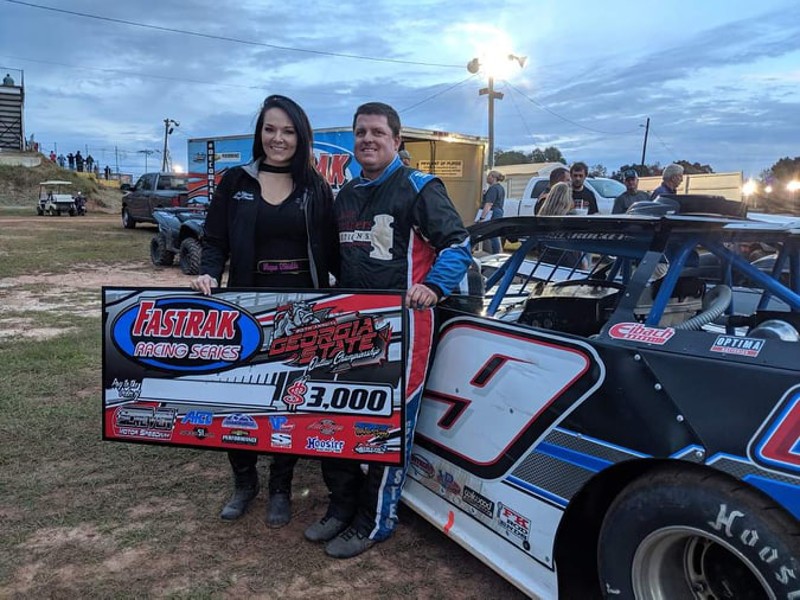 The Twin Cities, Georgia native started the weekend with a win on Friday, then backed it up with the finale victory on Saturday at the 3/8-mile clay oval.

Meanwhile, Carson Ferguson wrapped up the 2019 season championship by starting Friday night’s event. He took home a $10,000 top prize with the title.

On Friday night, the event got underway with Matthew Nance and Chester leading the field to the green flag, with Chester moving to the lead early on. He would hold the top spot through several caution conditions, including a big shunt on lap 11, when Nance and Chuck Bowie tangled in turn one, sending both cars up the track and gathering up several other cars, including Ferguson.

As the field moved around the track under the yellow flag, Nance plowed into the right rear of Bowie’s Machine. FASTRAK officials immediately parked Nance. Bowie was given his spot back, but would lose it on the restart due to a cut tire.

The last caution would fall on lap 25, setting up a 15 lap run to the finish. Back under green, Chester held off Nick Schlager to score the victory.

Bob Roberson finished in third, with Jordy Nipper in fourth and Jeremy Faircloth in fifth.

On Saturday, it was Bob Roberson and Chester leading the field to the green flag, with Chester again quickly moving to the top spot. Just as with the night before, the race was plagued with a multitude of cautions. Nine times the yellow flag flew over the course of the 40 lap contest.

Two incidents set up the final portion of the race. The first occurred on lap 21 when Ben Faircloth got into the wall in turn two. On the restart, Nick Schlager jumped the restart, and Corey Almond spun in turn one, drawing the caution. FASTRAK officials penalized Schlager two spots on the restart.

A multi-car crash broke out on the restart, gathering up seven cars in the melee. After a lengthy clean-up, the race resumed, with Chester continuing to show the way.

With drivers jockeying for position behind him, Chester drove away to his third career series win and the sweep of the weekend.

For more information on the FASTRAK Racing Series, visit FASTRAKRacing.com.