Union County looks to keep rolling in the playoffs 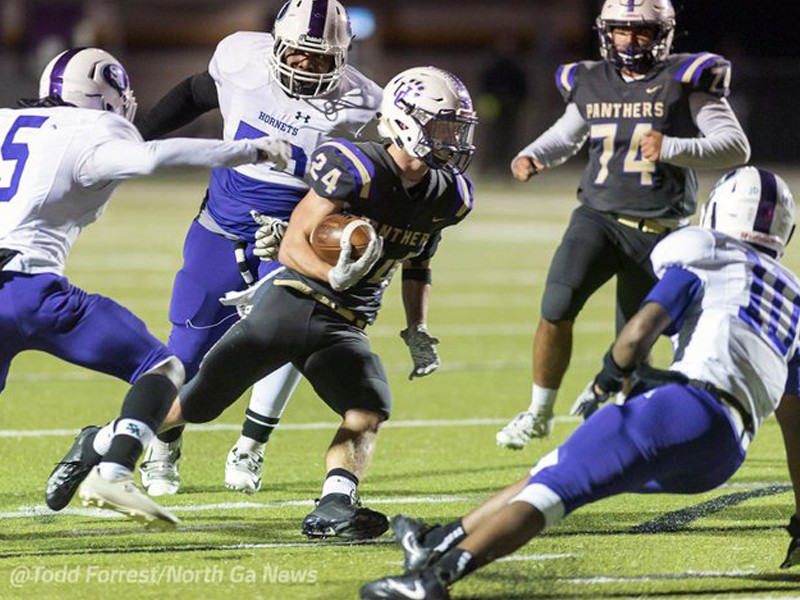 Jonah Daniel rushes against South Atlanta on Friday, Nov. 15, 2019. The Panthers will travel to Metter tonight in the second round of the Class 2A playoffs.
Photo/Todd Forrest, North Georgia News
Contact Editor

BLAIRSVILLE — Union County football coach Brian Allison feels like he’s playing with house money as the Panthers travel to Metter in the second round of the Class 2A playoffs tonight.

But even though he kind of sorta believes that, the competitive nature of Allison will not fully allow him to get behind the “house money” statement.

“There’s a part of me that wants to say, well, we’re playing on house money right now,” he said. “But the competitive part of me says, it’s the next ball game and we’re getting ready to play.”

The Panthers continued practice, as usual, this week, in the cool breezy climate of the Blue Ridge mountains, prepping for Region 2-2A No. 1 seed Metter.

The mood and preparation have been even-keel, laid back if you will, but Allison says that’s not unusual for his program.

“The funny thing about this football team is they’re just a really even-keel football team,” he said. “They really don’t get excited about a particular game or they don’t really get down for any game. I can count on my hand how many bad practices that we’ve had over the course of the season. When we get down, we battle back.”

The proof is in the results, according to Allison, and just like last week against South Atlanta at Mike Colwell Stadium -- in which the Panthers won their first-ever playoff game 19-15 -- the Panthers calmly rallied to be the victory.

“Last week was a good example,” he said. “We were down 15-12 and the next series the offense goes down and scores. So I believe the even-keel nature is a result of this group playing together, running the same offense and defense, since the sixth grade.”

Union will enter the rushing zone when they step on the field in The Jungle at Metter. The Tigers run a Wing-T offense and run it well, posting 385 total yards of offense out of the backfield in the 27-19 win over Screven County in the first round of the playoff.

“It’s a deception offense,” Allison said. “I don’t think it’s a secret. I think we’re just going to have to put as many people in the box as we can and get our reads. We have to get ourselves to the football and take care of our responsibilities.”

Senior safety, John Mancuso, says the Panthers will have to play physical against the Tigers' offense.

“We’ve had to play some physical teams all year,” he said. “Being able to match that physicality will be key for our defense. We need to be able to stop the run and force them into some passing situations.”

Ahmod Collins rushed for 147 yards and three touchdowns last week in Tigers’ win over Screven County. But he’s not all they have. Antwan Coney turned in 102 yards and Aaron Collins had 83 yards -- all on the ground.

The Panthers offense, however, has proven to be explosive this season, averaging 38.9 points per game -- No. 7 in Class 2A.

“They’re really physical and quick on defense,” he said. “They play together. We’ve got to get in a rhythm. We can’t have plays where multiple people mess up, miss a block…everybody has to play good and do their job.”

Senior wide receiver Kyle Morlock returned to the line up last week after battling an injury. He’ll be suited up and ready to go again this week, which will fortify the Panthers’ starting receiver corp alongside senior Sawyer Drake.

Junior fullback, Jonah Daniel, who rushed for 79 yards and a score last week against the Hornets, will add the balance coach Allison is looking for this week.

The Panthers understand the magnitude of this game. They also understand what a major step the program could take with another playoff win.

“It’s a big game,” Brian Allison said. “To get a win of this nature and of this caliber would be unprecedented for Union County football. “I have no doubt that we will play hard and play our guts out for four quarters and at the end of the game, we will walk off the field with our heads up and see where we’re at.”

UNION COUNTY at METTER
-- WHEN: 7:30 p.m.
-- WHERE: The Jungle, Metter
-- UNION COUNTY (10-1): No. 2 seed Region 8; defeated South Atlanta 19-15 last week in the first round
-- METTER (10-1): No. 1 seed Region 2; defeated Screven County 27-19 last week in the first round
-- NOTABLE: First-ever meeting between the two schools. ... The Panthers finally ended their playoff futility snagging their first-ever postseason win in the first round. They had been 0-6 all-time in the playoffs until last week. ... The Tigers also shook off some playoff frustrations getting their first playoff victory since 2003 last week. ... Like several other matchups around the area, this one will come down to the Tigers’ No. 2 defense (87 points, 7.8 ppg) against the Panthers No. 7 offense (428, 38.9 ppg). The 19 points by Screven last week was the season-high against the Metter defense. ... Only twice, with their full complement of players, have the Panthers been held below 33 points. Sr. QB Pierson Allison has passed for 2,804 yards and 28 TDs for the season and has a pair of big WRs in Sawyer Drake and a nearly-100 percent Kyle Morlock. RB Jonah Daniel has over 1,400 yards, including the eventual game-winning TD last week... But the Union defense, which is just 20th in 2A allowing 18 ppg, has been stingy most of the season. Only twice have they given up more than 21 points.
-- NEXT: Winner gets Brooks County-Rockmart winner in quarterfinal round