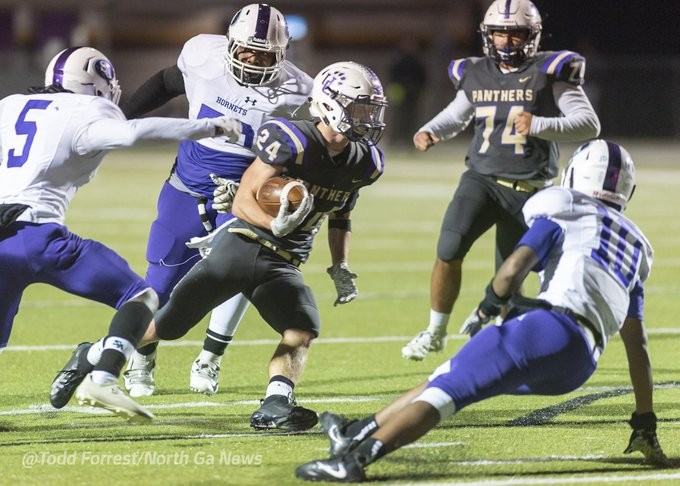 BLAIRSVILLE — Brian Allison clutched the football almost as if it was a prized egg.

And why not. The long-time Union County coach, and alumni, had finally witnessed, and engineered, along with his current group, something no other had in the 62-year history of the Panthers’ football program.

“I’ll tackle anyone that tries to take it from me,” he said, perhaps only half-jokingly, following Union County’s thrilling 19-15 win over South Atlanta Friday night at Mike Colwell Stadium in the first round of the Class 2A playoffs,

The victory marked the first-ever playoff win for the Panthers (10-1) after six previous tries. The 10 wins also set a new program record.

It also moves them into unfamiliar territory: the second round.

“Not worried about that at all right now,’ Allison said. “We’re going to have some fun and enjoy this.”

Drake Groves had already gotten a jump on the fun part. As soon as the clock struck 0:00 on the historic win, the senior center let out a primal scream and ran circles near the end zone.

“That’s probably the fastest I’ve ever run in my life,” Groves said. “This is just so special for us. I think this could be the kind of thing that busts us loose as a program. Just a great feeling.”

Junior running back Jonah Daniel was a little more subdued, probably because he was plenty sore after piling up 79 tough yards rushing despite battling nagging injuries during the game.

“We finally did it,” Daniel said. “It’s cool that we could do this for the program but also to be able to do it with my friends on the team. Just amazing, really.”

It was Daniel’s 11-yard touchdown run on the second play of the fourth quarter that gave Union County it’s final lead at 19-15 and then he and the defense stuffed a powerful Hornets’ rushing attack on a pair of three-and-outs. The Union County offense drained the final 4:16 of the game, including converting a huge third down on a 4-yard pass from Pierson Allison to Cayden Rich that forced South Atlanta to use its final timeouts.

The Panthers defense, which has had trouble with potent offenses in the playoffs in the past, allowed a 44-yard touchdown pass on the first South Atlanta drive of the game and just one long, 9-play drive to start the third quarter. Other than those two drives, Union County stopped the Hornets twice on downs and forced four punts, including blocking one for a safety in the second quarter. They also produced seven tackles for losses, many coming at key moments to put the brakes on potential Hornets drives.

“The defense played lights out all night,” Allison said. “Really just one drive and one big play. They were the key to game.”

Meanwhile, the Union County offense, one week removed from a 5-turnover nightmare against Rabun County, protected the ball much like Allison did his game-ball at the end. The Panthers did not commit a turnover and senior quarterback Pierson Allison was 17-of-32 for 206 yards and a touchdown. Sawyer Drake had 12 catches for 134 yards, including a 15-yard TD pass that tied the game in the second quarter.

Both defenses were hard to crack the entire game.

The Panthers got the opening kickoff and struck quickly with a 31-yard pass from Pierson Allison to Drake to the Hornets 32. But a series of blitzes by South Atlanta forced a fourth down and Union turned it over on downs.

A powerful Hornets run game then went to work. After eight straight runs into Union County territory, the Hornets caught the Panthers on a blitz on a long third down as John Lawton found a wide-open Jalin Young behind the Union defense for a 44-yard TD pass and a 7-0 lead midway through the first quarter.

The South Atlanta and Union County defenses traded stopping the offenses on downs with the Panthers taking advantage of a short field as Pierson Allison connected with Drake on his TD pass to tie it at 7 and cap a 39-yard drive.

The Hornets then made the two biggest mistakes of the half. Young dropped the ensuing kickoff out of bounds at the South Atlanta 7. Then, Union County junior Noah Underwood blocked the Hornets punt for a safety and a 9-7 Panthers lead.

The defenses continued to stymie the offenses as the Hornets stopped the Panthers on downs and the Panthers forced a South Atlanta punt. But Union County would again take advantage of the field position change.

Despite a series of untimely penalties that cost them a shot at a touchdown, the Panthers drove to the Hornets 30 and junior Mason McCombs drilled a career-long 47-yard field goal on the final play of the half to give the Panthers a 12-7 halftime lead.

“That was just a tremendous kick by Mason,” Allison said. “That gave us some momentum going into the half.”

But the Hornets come out strong to start the third quarter moving to the Panthers 31 after just 3 plays. Freshman Keyjuan Brown scored on a 15-yard run to cap the 74-yard drive in almost five minutes to open the second half. A 2-point pass to Pete Boyd gave South Atlanta a 15-12 lead.

The Union County defense again would provide a spark stopping the Hornets on downs at the Union County 41 on a fake punt attempt. Jonah Daniel capped the ensuing 59-yard drive with his 11-yard score to reclaim the lead 19-15 for the Panthers.

From there, the Union defense clamped down holding the Hornets to just six plays and minus-3 yards in the fourth quarter. 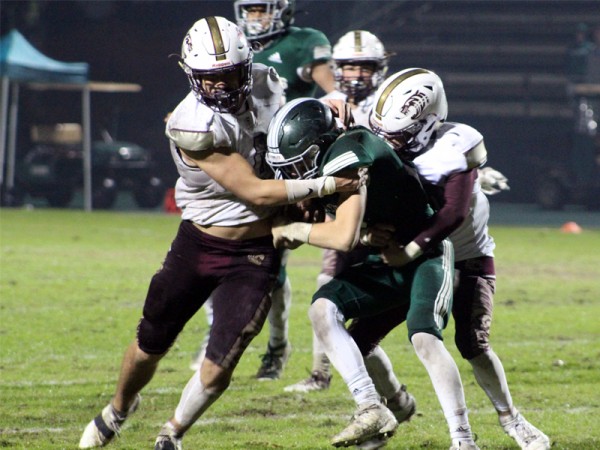 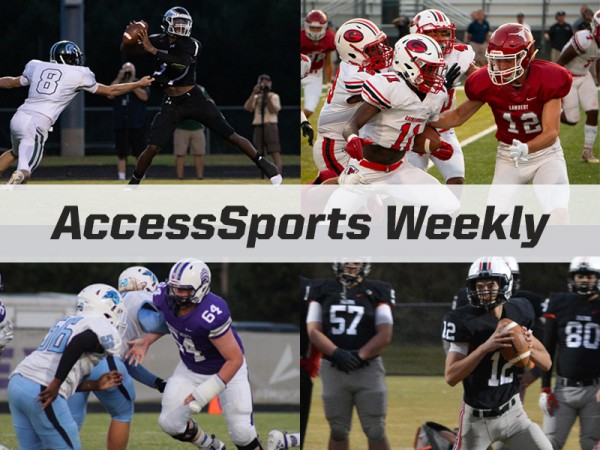 Big plays propel Lanier to win over Gainesville
Gainesville did just about everything it wanted against No. 5 Lanier Friday night in the two teams’ season-finale showdown at City Park Stadium with a home playoff game on the line. The only thing the Red Elephants didn’t do was finish when they had the chance...
Friday Game Night

ICYMI: Playoffs 1st round caps: Nine area teams begin playoff journey
It’s finally here. The first round of the 2019 Georgia High School Association football playoffs get under way on Friday around the state and in northeast Georgia...
By Jeff Hart

Disappointment or progress for 2019 teams?
Before the season, we at AccessWDUN asked who among our 24 area football teams could get back to prominence, whether it be repeating as region champions or making deep playoff runs. Or both. Or some combination in between...
By Jeff Hart
Privacy | User Agreement | Contact | Advertise With Us
2021 © Jacobs Media Corporation. All rights reserved. EEO Report. Website by Full Media
Login / My Access
close
Search