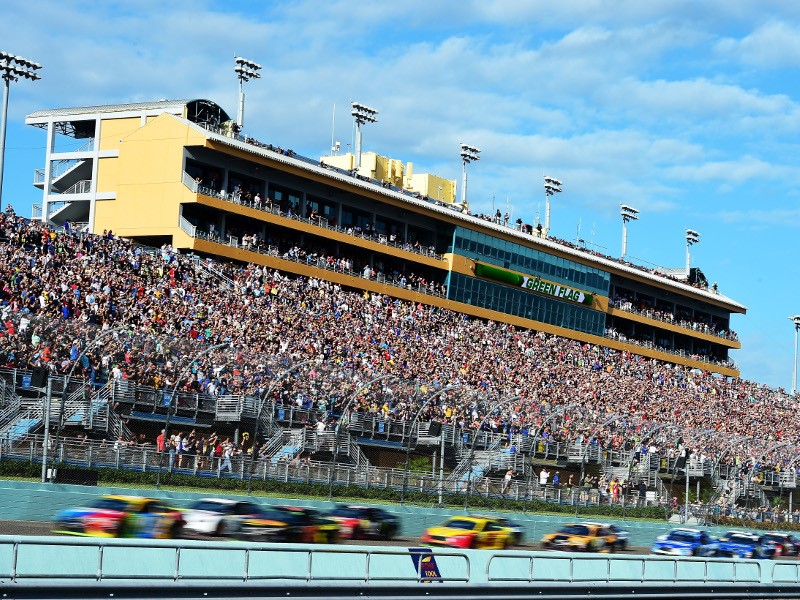 Canadian Stewart Friesen won the NASCAR Gander Outdoors Truck Series race at the Phoenix one-miler – his second career series victory and first ever opportunity to race for a series championship.

NASCAR Xfinity Series veteran Justin Allgaier turned in his best effort of the season when it counted most – rallying to a victory on Saturday at Phoenix and earning his third title opportunity in the past four years.

Intense competition filled the 2019 Playoffs and there’s every reason to believe there will be strong storylines at Miami as well.

Stewart-Haas Racing’s Kevin Harvick won the 2014 series championship – pulling off a Phoenix “walk-off” win similar to Hamlin’s this week. Harvick was ranked eighth in the standings heading into that Penultimate Playoff race and won it to earn his shot at the title. And he answered the effort with an emotional trophy hoist a week later at Homestead.

“I knew at the end of the race last week we were going to have a fighting chance,” Hamlin said. “I had all the parts and pieces I needed to go to Phoenix and win the race. But it’s all the unknowns that you don’t know about.

“I just made sure I did my job. (Crew chief) Chris (Gabehart) worked really hard and did his job. Great to have a result like that.”

Should anyone other than Hamlin win the title at Miami, the sport would be crowning only the second multi-time champion currently active in the series – joining seven-time Cup champ Jimmie Johnson.

Certainly all the Playoff eligible drivers drove at Phoenix like they were teeing up for this week’s title race in South Florida. Busch finished runner-up to Hamlin. Truex was fourth and Harvick was fifth.

This year’s title battle will mark only the second time since the Playoff eliminations started in the 2014 season that a team has had multiple drivers among the Championship 4. In 2016, both Joe Gibbs Racing drivers Carl Edwards and Kyle Busch advanced to the Championship 4 – a race and championship ultimately won by Hendrick Motorsport’s Jimmie Johnson.

“We’ve raced against the 18 (Busch) there a few times, and kind of quasi-teammates, but never under the same roof, so to speak,” Truex said, referring to the Furniture Row Racing Toyota team he was part of for the 2017 championship.

“I’m not sure (what to think). It’s going to be interesting for sure. I feel like we’re here for a reason and that’s because we all work together so well and hopefully we’ll do that the same this week and throughout the weekend next weekend. And then Sunday, let the best team win.”

As for average finishes, Harvick’s 6.6 is easily best among this group of final four drivers and he boasts the most top-fives (10) and top-10s (16) as well.

Hamlin is the only multi-time winner among the foursome – earning trophies in 2009 and 2013 pre-dating the current Playoff elimination format.

“There’s still work to be done,” Hamlin told the television audience Sunday. “(The win) doesn’t guarantee a championship. Gives us a chance. Live to fight another day.