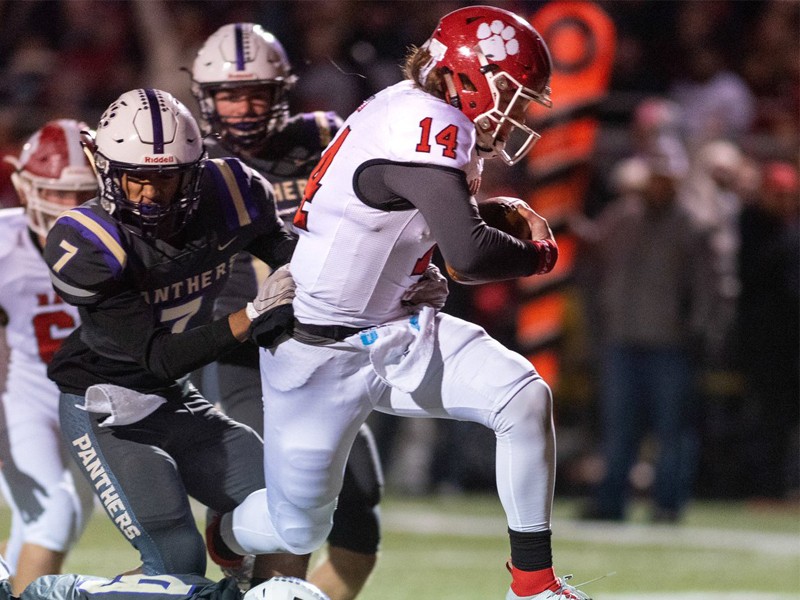 BLAIRSVILLE — In a game that featured two of the state’s best offenses, it was the Rabun County defense that made the biggest statement Friday night.

The Wildcats defense held Pierson Allison and Union County to a near season low in yards and a season-low in points in a stunning 49-7 rout at Mike Colwell Stadium in a showdown for the Region 8-2A title.

It was the sixth straight 8-2A crown for Rabun County. Union County was looking for its first region title since 1973.

Both teams came in averaging well over 40 points a game. Allison was the No. 2 passer in Class 2A, behind only Rabun’s Gunner Stockton.

But Allison was picked off twice and held to just 13-of-32 for 175 yards and just one touchdown pass. Meanwhile, Stockton chewed up the Panthers defense for 371 total yards and seven total touchdowns.

Stockton finished 22-of-36 for 219 yards and a pair of TD passes while running for another 152 yards and 5 scores.

Rabun County (10-0, 7-0 Region 8-2A) never trailed and wasted little time in taking control. Stockton capped a quick opening drive with a 10-yard touchdown run. After a Union County fumble, Stockton connected with Sutton Jones on a 3-yard touchdown pass for a 14-0 lead late in the first period.

It did not get any better for the Panthers (9-1, 6-1 Region 8-2A) as they fumbled again on their next possession and Allison was picked off their third possession. Union County as stopped on downs on its fourth drive and the half ended the Panthers fifth drive.

The Wildcats extended their lead to 21-0 early in the second quarter on an 8-yard scoring run from Stockton.

After a scoreless third quarter, Rabun County exploded in the final 12 minutes. Stockton scored on a pair of 1-yard runs and tossed a 16-yard TD pass to Braxton Hicks in a 5-minute span as they opened up a 42-0 lead with just 5:50 left in the game.

The Panthers finally got on the board when Allison found Mason McCombs for a 15-yard touchdown pass with just 2:22 left.

Stockton but the final touches on the victory a 6-yard touchdown run in the final minute.