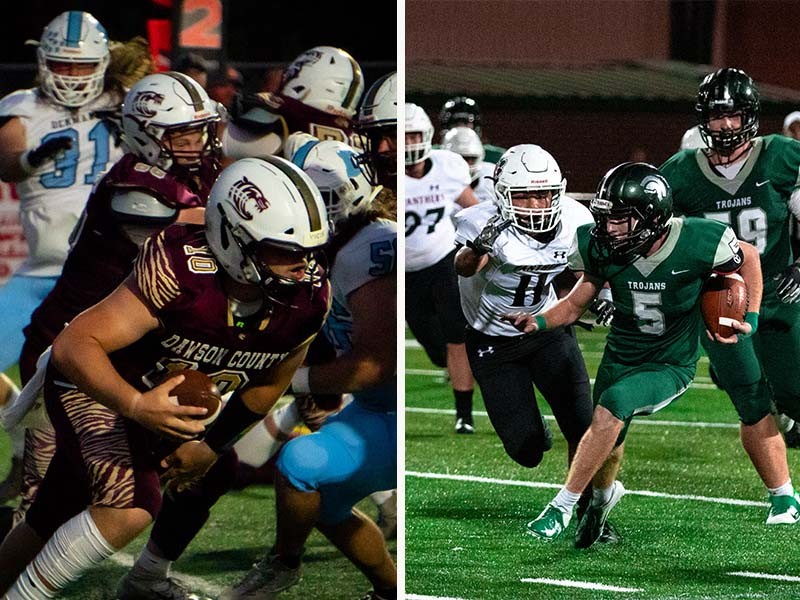 It's a story about a North Hall program that has been beaten and battered with injuries but remains in the fight for something more; and a Dawson County program, decimated by graduation, putting themselves back together with inexperienced players and defying all odds to be in the hunt for a home playoff game.

"Just learning how to depend and trust each other," North Hall coach Dave Bishop said. "You can be better than you think you are."

Dawson coach Sid Maxwell says it's been a learning experience for everyone.

"You can start young, but you don't continue to play if you stay young," Maxwell said. "I think these guys have grown. Everybody is just working hard to get better each day. It's paying off for us."

North Hall entered the season with returning starters all over the field and were a favorite to win the Region 7-3A crown. Then, key injuries began to pile up and losses to Cherokee, White County and GAC riddled the Trojans' schedule. But Trojans were able to combat those injuries and chug through the season OK and are now healthy playing for a home playoff game.

"Over the last few weeks, it really has given us a boost," Bishop said about being healthy. "It's a testimony to our kids and coaches to make the changes and put kids in different places and still come out winning or at least playing well."

And for the Tigers, losing 38 seniors, including the majority of the starters on both sides of the ball, no one expected them to compete against GAC, much less be in a fight for a home playoff spot in November.

"Probably team chemistry," Maxwell said about the team. "My coaching staff has done a great job of blending the boys together. We coach very positive and I think this year our boys knew they had to play together. What bonds them together is they play hard for each other."

Yet the two programs find themselves in almost exactly the spot as last year, battling for the No. 2 seed in the region and a home playoff game.  The only difference this year, the game is at The Brickyard. Kickoff is set for 7:30 p.m. It will be broadcast on FM 102.9 WDUN.

The Tigers beat North Hall, 17-10, in overtime at Tiger Stadium last season to win their third straight game against the Trojans.

"(It's going to be a) Hard fought football game," Bishop said. "That's about as good as I can tell you. We've had to do some things recently to give us opportunities to beat on bigger folks. We're not very large and they have good size. One of the things they do well is throw it. I think it's going to be a great game to see."

"Coach Bishop and his staff do a great job. They'll be well-coached and well prepared. Playing over there is very tough on the visitor with all the fans right behind you -- a lot of distractions. With a young football team, the biggest challenge for us is not become the moment and focus on what is important now and that's the play."

This matchup will feature two very different offensive styles that know how to score.

North Hall's Wing-T attack has scored 292 points -- an average of 32.4 points per game (12th in Class 3A) -- and is very capable of blowing open the game with its explosive backfield.

"We're just trying to get prepared," Maxwell said about North Hall's Wing-T. "You don't see it often, so it's new to our boys. So we're trying to get a crash course in three days to prepare yourself to make sure you're in the right spot. A lot of these kids haven't played North Hall, so it'll be an ongoing experience during the game."

"They have a good running back, JT," senior defensive back Brody Howell said. "He's always done a great job for them. He's just a great athlete all around. He's someone that we can't let go."

Meanwhile, the Dawson County offense (337, 37.4 ppg) is 6th in Class 3A and brings a different approach in its spread offense than last season. Although it shakes out close to balanced, the Tigers lean more on the pass than the run -- a big difference from last season.

"We've had some teams that we felt like, OK,  let's make them one dimensional and make them throw the ball ... and we've been able to do that with some folks," Bishop said. "The problem is ... that's what they do and they do it well. So being able to disrupt that is to, maybe, have well-time blitzes where they're not able to pick that up and understand how to stop their screen game, which is the best we've seen all year."

"I think they play together better this year," Fair said about Dawson. "They will try to attack us passing the ball. We need to control what we can control and play hard."

Defensively, the Trojans have allowed just 15.2 ppg on the season, while the Tigers are yielding just 18.1 ppg.

"Just being who we are," Maxwell said. "Take care of the football, spread the ball around, being an attacking offense and a steady defense with good special teams."