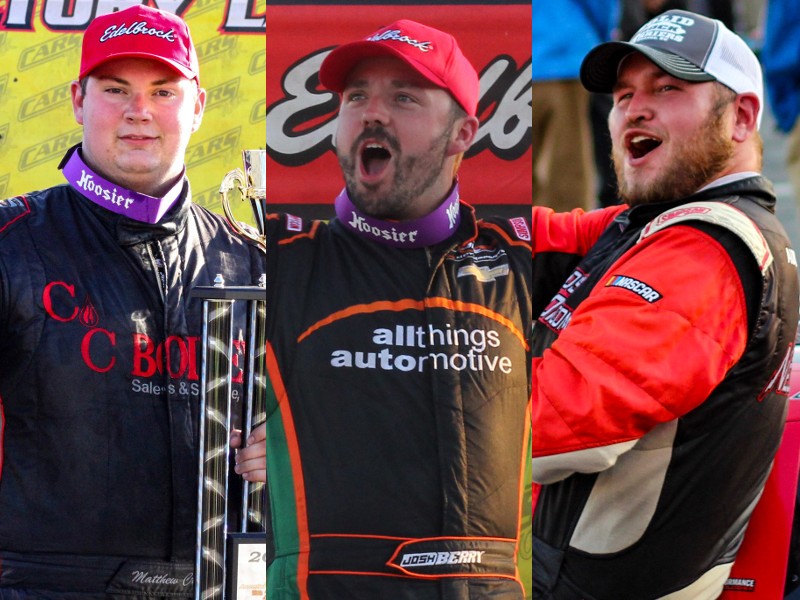 Both led every lap en route to winning their respective races in dominating style. For Berry, the effort was not enough, as he lost the championship fight by a single point to Bobby McCarty in the most dramatic and thrilling title fight in series history.

In the Super Late Model feature, Tate Fogleman rocketed to the pole position just ahead of presumptive series champion Matt Craig. Craig, however, wasted no time in continuing his dominance of the day and grabbed the lead out of turn two on the opening lap of the race.

Craig continued unchallenged at the front of the field during a clean and rather eventless feature. A single competition caution and a slowdown for oil on the track were the only things which allowed Fogleman to close the gap.

Craig wrapped up the 2019 season championship by leading every lap en route to his second victory of the season, a 5.916-second margin over Carson Kvapil in second. Fogleman finished in third, with Nolan Pope in fourth and Jared Fryar in fifth.

“I can’t tell you it was easy, it takes a lot of hard work at the shop,” Craig said. “The guys will stay at the shop all day and all night sometimes, grinding it out, finding speed every chance we get. That was a good racecar right there. It drove really well, it never really lost any speed the whole race, it was awesome.

“We knew we had a really fast racecar and it was fun to come out here and start the race to win the championship, not have to worry about too much because even when you have good racecars, little things can happen,” he continued. “You can break something, get a flat tire, and it can all go away right then.”

In the Late Model Stock feature, Josh Berry needed to earn maximum points to give his JR Motorsports team the best shot at a championship, and by sitting on the pole, he added two more points to his total – locking up the season-long award (1 point) for most poles and claiming the bonus point for sitting on an event pole. As expected, he shot out to the early lead on the initial green flag.

Three laps into the race, Bobby McCarty’s title hopes were nearly dashed when Craig Moore and Taylor Gray made contact, triggering a five-car melee which also involved Brody Pope, Stuart Crews and Deac McCaskill. The accident started immediately in front of McCarty, who narrowly slipped by to avoid disaster.

Following the restart, Berry once again jumped out to the lead and controlled the pace of the 125-lap feature. Despite a rash of cautions late in the race, he continued to be the driver everyone chased when the race was under way. The restarts allowed McCarty to slowly improve his position from his 11th starting spot, restarting in key lanes which permitted him to make passes on the fast and smooth South Boston layout.

Once the final green flag of the race was displayed, McCarty raced his way into second place and held what appeared to be a comfortable points lead. Corey Heim eventually reeled in McCarty, whose championship hopes hung in the balance.

Over the final 20 laps, Heim pressured and peeked around McCarty, pulling to the inside on the final two laps. While Berry took the checkered flag nearly three seconds ahead of them, McCarty fought for his life, edging Corey Heim by less than half a car length at the checkered flag.

The finish was just enough to give McCarty his second consecutive CARS Late Model Stock Tour title, albeit by a single point over Berry. Had Heim passed McCarty, the tiebreaker would have been decided in favor of Berry.

“We came here and we knew what we had to do,” Berry said. “Bobby and those guys answered the call. Sure, it’s a little disappointing, but when you look back on it we’ve had a great year. Like I said yesterday, no matter what happened, we weren’t going to hang our heads. We did everything we could, and just came up a little bit short in the championship. This place has been tough for me over the last few years and to have the performance that we had today really means a lot.”

McCarty, like Berry, realized things could have played out a little differently if even the smallest details unfolded differently.

“At the beginning of the race, we knew we had our work cut out for us,” McCarty admitted. “We played the restarts and stayed on the outside, picking up a couple spots. We had to race the race differently than we wanted to. We got to around fifth or sixth and the leader was gone, so we backed off and started saving. Really, being on the outside on the restarts is what helped us a lot. I don’t know where Corey is, but I owe him, that kid raced me as clean as could be. Congrats to Josh and them, he made me work a whole lot harder than I wanted to work, but he had a really good car. It was the second race in a row nobody’s really had anything for him, so we’ve got to go to work on that. I really have to thank this whole team for standing behind me and pushing me to find everything I needed to find in the car.”

“I just thank the good Lord above for everything playing out how it played out,” he continued. “If we would’ve started on the inside on that last restart, we wouldn’t have finished second.”

The CARS Tour will celebrate its champions and its season December 14 at the Charles Mack Citizen Center in Mooresville, North Carolina before firing up again for another year on March 7, 2020, at Southern National Motorsports Park with twin features for both Super Late Models and Late Model Stock Cars.