F1: Hamilton fastest in 2nd practice at US Grand Prix 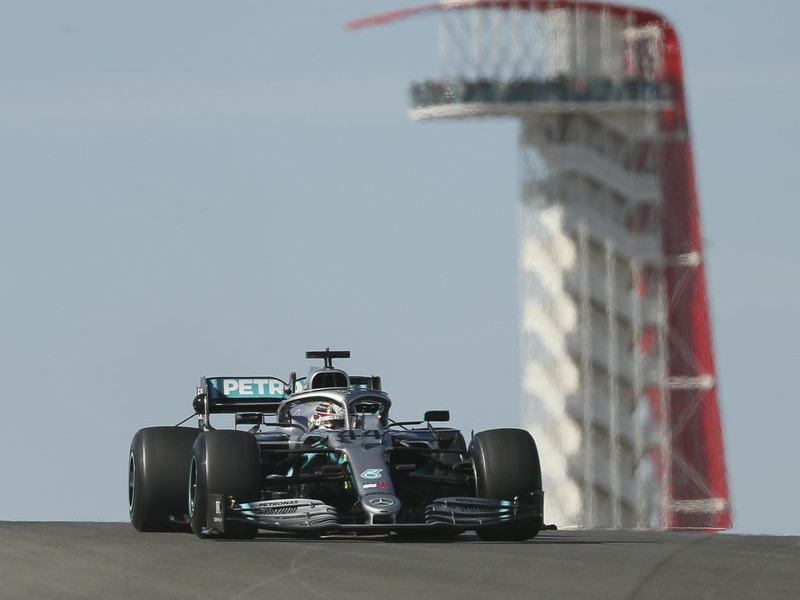 Mercedes driver Lewis Hamilton, of Britain, steers his car during the first practice session for the Formula One U.S. Grand Prix auto race at the Circuit of the Americas, Friday, Nov. 1, 2019, in Austin, Texas. (AP Photo/Eric Gay)
Contact Editor

AUSTIN, Texas (AP) — Cold and bumpy in the morning, fast in the afternoon.

A distant eighth in the morning session, Hamilton's best lap in the afternoon was 0.301 seconds faster than Leclerc.

Hamilton is chasing a sixth career Formula One championship on a track where he's won five times since 2012 and clinched the championship in 2015. British driver needs only to finish eighth or higher Sunday to move past Argentina's Juan Manuel Fangio for second place in F1 history. Only Germany's Michael Schumacher has more championships with seven.

The opening practice sessions were marked by cool temperatures and a bumpy track at the 7-year-old Circuit of the Americas.

The track is built on clay soil that will expand with rain and contract when dry, and drivers spent the morning session dealing with noticeable bumps that bounced the cars around several areas of the race course.

Some of the most notable bumps were heading into the first turn as cars sped through the straight at the starting grid in front of the main grandstand, and as they pulled out of pit lane.

"This must be the bumpiest track in the world," Hamilton radioed to his garage in the morning session.

Teams had differing opinions on how the bumpy conditions would affect the cars and the race.

"I'm not worried about the integrity of the car," said McLaren Chief Executive Zak Brown. "It could catch a driver or two out in the race."

Two teams reported car problems because of the rough going.

One area of concern was a bump at turn nine of 20 which Renault said caused a disruption with the hybrid engine system in Kevin Magnussen's car. Leclerc had his own problem on the same spot with a run into the grass.

"To say right now it would not affect reliability would be very brave," said Ferrari Team Principal Mattia Binotto. "It needs to be managed. We need to be aware of it and make sure it doesn't affect the result."

The same track hosts the MotoGP Grand Prix of the Americas and the motorcycle riders have long complained of bumpy conditions. But Friday was the first time it became an issue for the F1 drivers.

"Luckily the bumps aren't really in braking areas but it's something that probably needs looking at before next year," Verstappen said. "I don't mind bumps on a street circuit but some of these are quite severe and more like a jump so the wheels actually come off the ground."