Game of the Week: Red Elephants looking to seal the playoff deal against Apalachee 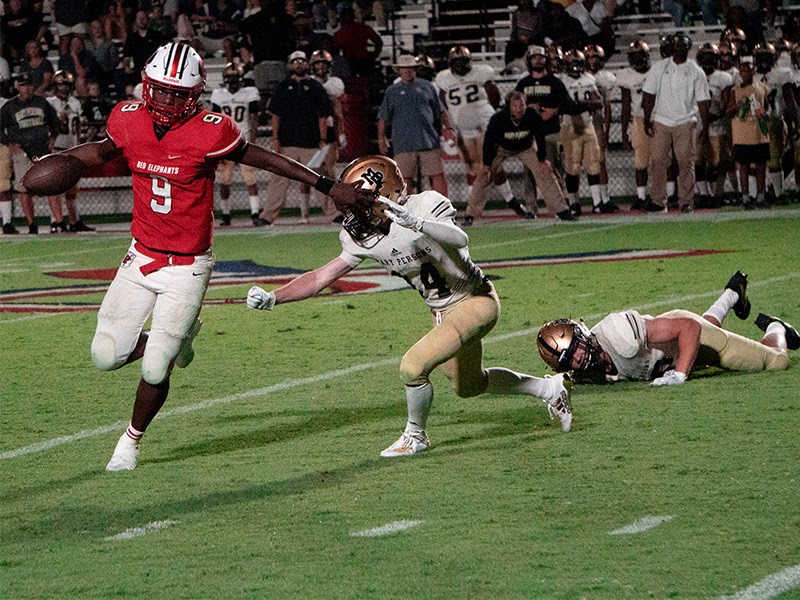 GAINESVILLE — The Red Elephants have the opportunity to host a first-round playoff game.

Although coaches don’t like to look ahead, they still see the big picture. The framed playoff portrait has the Red Elephants reaching for the No. 2 spot in Region 8-6A, but they'll have to beat Apalachee tonight and upset No. 5-ranked Lanier on Nov. 8.

Gainesville coach Heath Webb isn’t taking the bait on talking about any team other than Apalachee. The Red Elephants will welcome the Wildcats to City Park tonight. Kickoff is set for 7:30 p.m. The game can be heard live on 94.5 FM The Lake.

It’s not a surprise that Webb didn’t leap into the future and is focused on stopping the Apalachee Wing-T offense, which can wreak havoc on a defense.

“It’s a lot of inside runs and big bodies moving around close to each other,” junior defensive end Ethan Reeves said about the Wing-T. “The defensive line is going to have to play hard and come off the line fast. Everything else will take care of itself. “

The Wildcats’ misdirection offense is only averaging 151 yards per game while scoring an average of 13.4 points per game and are coming off back-to-back losses to No. 1 Dacula (43-0) and No. 5-ranked Lanier (43-13). But don’t be fooled by the results or the season averages, the Wildcats moved the football against the two top-five opponents.

“We’ve got to win the line of scrimmage and be disciplined,” Webb said. “We’ve got to play smart football. We can’t be deceived by the Wing-T.”

Shaan Cook leads the Wildcat rushing attack with 532 yards this season -- an average of 66.5 yards per game -- and five touchdowns.

“We know that they have their athletes on the offensive side of the ball,” sophomore linebacker Yusif Ali said. “It’s one of the hardest offenses to stop. We have to defend it to the best of our abilities.”

The Red Elephants will count on defensive tackles Makius Scott (South Carolina-commit) and Ignacio Olvera and defensive ends Reeves and Khaliq Maddox to terrorize and dominate the line of scrimmage. They'll also depend on linebackers Ali, Ques Borders and Quamaine Borders to eliminate the potential for big plays.

On the flip side, Gainesville’s identity is built on its run game, averaging more than 232 yards and 27.1 points per game.

“I think we’ve found out works well for us,” Webb said. “We thought we knew what our identity would be early in the season and as the season has gone on, we’ve identified that.”

Junior quarterback Gionni Williams (59-of-114 for 945 yards and 11 TDs; 104 rushes for 640 yards and 4 TDs) has guided the Red Elephants to back-to-back wins against Habersham Central and Winder-Barrow. JD Brooks (62 carries for 321 yards and 8 TDs) and Dez Brown (68 rushes for 539 yards and 4 TDs) have been running freely behind a big offensive line, led by Jordan Williams, Alex Salcido, Elijah Ruiz, Zyhir Tanner, Michael Gosa and Cedrick Nicely.

The combination has the Gainesville offense a bit unpredictable and sometimes explosive.

“Gionni Williams has played well in the run game and passing game,” Webb said. “ And because we’re running the ball so well, we're able to get some big shots down the field. When we get those opportunities, he's made the most of them. Then you have two running backs that just split time pretty equally in JD Brooks and Dez Brown. Both of those guys are threats to go the distance anytime, so I just feel like the combination of those three in the backfield has made a big difference.”

If the Red Elephants want to stay out of the No. 4 spot in the region, tonight's game is a must-win. A win will clinch at least a No. 3 seed and sets up next week's game at City Park against Lanier as a battle for the No. 2 seed.

"In high school football, you never want to be the No. 4," Webb said. "You don't want to play somebody's region champion. They're the region champions for a reason, so clinching the No. 3 seed would be big in that sense."

“It’s probably the biggest game of the year because we still have a chance to get the No. 2 seed,” Ali said. “We’ve just got to execute and play fast.”