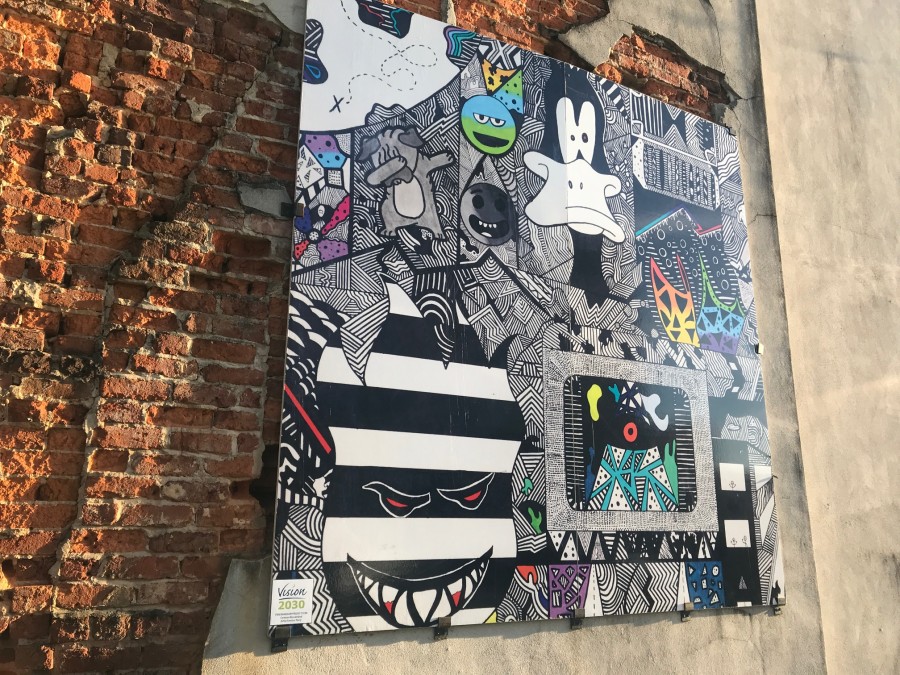 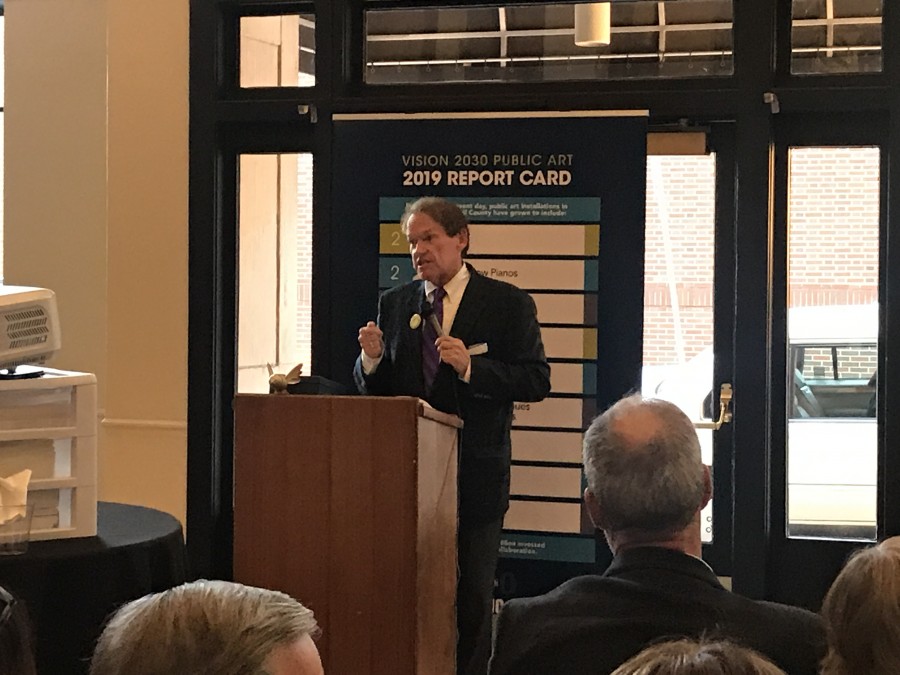 There are big plans for public art in Hall County and Vision 2030 officials shared their goals with the public Monday night at the first annual State of the Art.

“After five years of the public art committee’s efforts, we thought it would be good to have a community report card,” said chairman Frank Norton Jr. “So tonight what we did was explain the various pieces of art that we started with five years ago, which was a number about 75, and then we’ve added that in layers across all of Hall County, and we’ve added about 125 pieces, plus some bike racks, plus some B.U.R.D.S., and it’s just the start.”

Other projects included the Protective Angel sculptures, the youth free-range art program, the “Great Wall” mural, the Lake Lanier Olympic Venue tower restoration and many others. Norton reminded the room, which was standing room only, that installations were thanks to donations from the community, individuals and local businesses. “We don’t have any money. I need to tell you that,” Norton said with a smile. “We rely on each and every one of you to contribute to the overall fabric.”

Norton said in addition to individual pieces on Green Street and in the Brenau University area, such as the new Q sign at the Quinlan Arts Center, there are some smaller efforts, such as the nine youth art pieces in the space between the Hunt Tower and The Collegiate downtown, which used to be the Royal Theater and installations at the county public administration building.

“What we want to do is make Hall County the place to come from a tourism standpoint to enjoy and visualize public art in the state of Georgia,” Norton said,

Then, Norton established upcoming project goals, a lengthy list with high-interest projects. A recent posting to a Facebook group inspired Norton and other art lovers to track down the history of a mural painted on the former Odd Fellow Building, which was torn down in 1984 to widen Jesse Jewell Parkway. Originally located on Sycamore Street, the building would be roughly where the City Plumbing and Electric building is now.

The mural was created by a University of North Georgia - Dahlonega student, Karen Hawk, who was eventually located and agreed to assist with the recreation of her original mural, along with members of the Gents Club from Fair Street School. The mural, Hawk told them, was not black and white as the old photograph suggested, but actually black, white, red and yellow, and was meant to symbolize all of the races “coming together in peace.”

Now called “The Lost Wall,” it was the first piece of public art sponsored by the Arts Council in 1974.

In addition to the “Lost Wall” project, a new installation in downtown Gainesville, doubling the 2030 art collaborations, launching the Latin wall initiative on Atlanta Highway, organizing and launching the Art of Chicken with the poultry industry, defining the Midland art zone in the “blank canvas” that is the Midland railroad area, completing the Hammock Hollow at Laurel Park, and making upgrades to the Downtown Alley, Go Go Transportation Art at bus stops and at Poultry Park. Additionally in the next five years, Vision 2030 wants to create a “Discover, Explore, Experience,” feel, diversify, strengthen existing art zones in the community, make art integral in place making operations and finally, make Hall County the number one place in Georgia for public art.

The group also acknowledged that some of the most expansive public art was resting peacefully in cemeteries, including at Memorial Park. They recognized Jack Frost as the first-ever Public Art Champion for his inclusion of art in the community. “Jack Frost has been a steward of public art,” Norton said. He encouraged everyone who had not seen some of the pieces, like the Noah’s Arc sculpture series and presidential sculpture series at Memorial Park cemetery to do so, noting that the cemetery held the largest collection of public art in the county. Frost was unable to attend the State of the Art, however, Scott Wiley with the funeral home accepted the award on his behalf.

The public art committee is hoping to also begin documenting the public art in churches and cemeteries around the county, ranging from sculptures and statues to stained glass windows.

Vision 2030 is part of the Greater Hall Chamber of Commerce and encompasses many different areas to better the county by the year 2030, including 15 “big ideas” like public art, healthcare, diversity, tourism and education consortium. Norton encouraged anyone interested in participating in or donating to any of their public art initiatives to reach out to the committee.