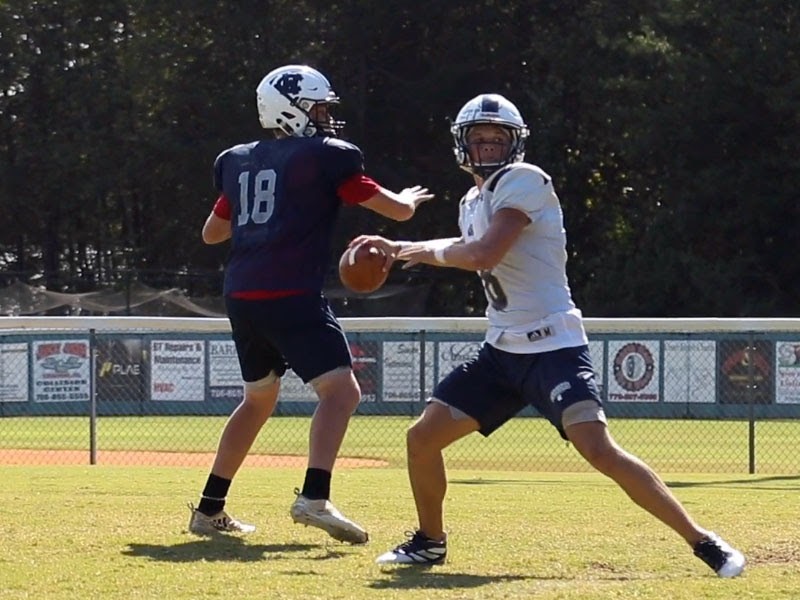 CLEVELAND — Wading through the region standings to find the top-four teams can sometimes be confusing and a little bit frustrating.

Yeah. It’s like a married couple trying to figure out what’s for dinner … downright frustrating.

What’s not confusing or frustrating for the White County Warriors (4-3, 1-2 Region 7-4A) is a win against Denmark (5-2, 2-2 Region 74-A) tonight will put them in the driver’s seat for fourth place in Region 7-4A. And the only way they can lose that seat is if Denmark beats Flowery Branch on Nov. 8 and the Warriors drop their last two games against Chestatee and Blessed Trinity. Kickoff is slated for 7:30 p.m.

“We definitely control our own destiny,” Warrior quarterback J Ben Haynes said. “Denmark has a good team and has a lot of big-name recruits and stuff. But at the end of the day, they still have to drive up to Cleveland and play us. It’s a big opportunity for us. It’s a playoff game, essentially. We’re excited about the opportunity to hopefully prove a lot of people wrong Friday night.”

“Talent is like emotion,” White County coach Tim Cokely said. “I’ve always told my team that when the emotion wears off, execution is going to take over. It’s the same with talent. You can have talent, and I want to have all the talented players I can get, but when that talent wears off or when everybody kind of gets used to it during the game, then your execution and your teamwork are going to take over. If they have that, then they’ll probably win. If we have it, then we’ll probably win. That’s kind of how that works.”

The Danes can be explosive on offense, especially through the air. McLaughlin has tossed 1,576 yards and 14 touchdowns this season and rushed for another 182 yards and five scores in an offense that averages 41 points per game. His main target, 6-foot-4 Capers, is averaging 25 yards per catch and has hauled in 756 yards and eight touchdowns.

They'll keep it balanced with a steady rushing attack, averaging 182.3 yards per game. Brunson has toted the load with 434 yards on 52 carries and seven touchdowns. Sophomore Marcus McFarland and junior Zach Ogbogu have combined for 500 yards and 10 touchdowns out of the backfield.

“They’re going to score and make plays,” Cokely said. “We have to play good team football, do our job, help our buddies and rally to the football. We love playing at home.

White County is 3-0 at home this season and has come a long way since last season’s 28-27 loss to Denmark, but scoring against Class 4A's No. 4-ranked defense (11.9 points given up per game) won't be easy.

“We’re completely different from last year,” Cokely said. “We have to fight to be able to get off to a quick start. When we’ve won, we’ve got off out of the gate pretty well. When we’ve lost, we haven’t. The challenge is can we start well against a really good team.”

Haynes has taken lead at quarterback in his third season at the helm of the Warrior offense. He’s averaging 209.7 yards passing per game and has tossed 10 touchdowns. He’s also averaging 92 rushing yards per game and 14 TDs. He was 6-of-12 for 163 yards and three touchdowns and rushed 90 yards and three scores in the 42-0 win over West Hall last week.

“I think we have to be able to protect,” Haynes said. “If we throw the ball around, it’ll open up our run game. Hopefully, we’ll have a lot of success offensively.”

Cooper Turner and Jesse Thomas have combined for 900 yards receiving and six touchdowns to lead the Warrior receiving corp. Will Sampson, Clayton Rogers and Reece Dockery also share time in the Warrior backfield.

On defense, Nix Burkett leads the team in tackles with 71. Silas Mulligan, Zion McMullen and Jaquez Williams will be key on a defense that gives up an average of 25 points per game.

"We've been really focusing on scheme this week," Burkett said. "They're a pretty good team. It's a huge game for us. It determines playoffs. We have to play our game."

Cokely said turnovers and tackling will be key in getting a win against the Danes.

“In high school, if you have a big back, the other team is in trouble,” Cokely said. “They have a big back and so, we’ve got to get to the ball with multiple guys and get him on the ground. Capers is going to make plays. It’s just a silly coaching philosophy to say we’re going to shut somebody down who’s 6-5 and runs 4.3 and can catch it behind his head. That’s not the game plan. The game plan is to hit him. The game plan is to get him on the ground and play as hard as we can. So, for me, it’s about being able to tackle really well on defense and the offense not making mistakes.”