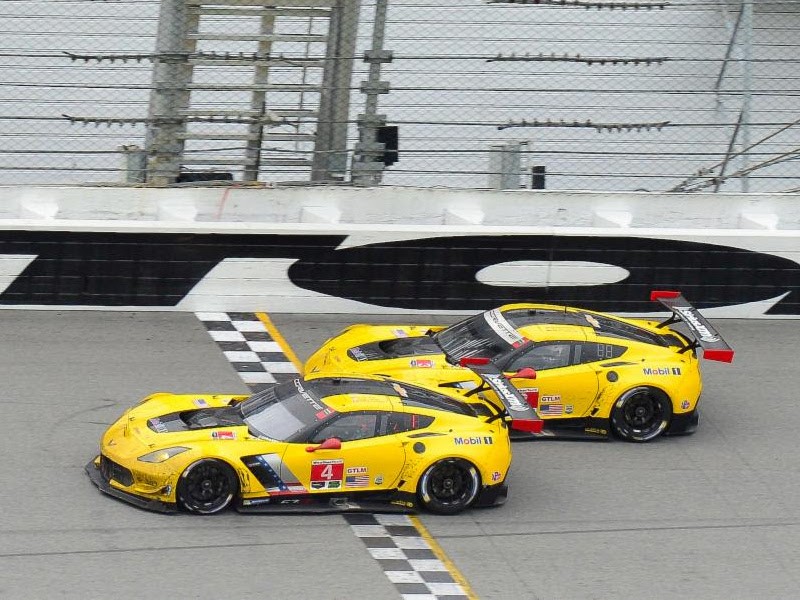 BRASELTON, Ga. - The successful history of Corvette Racing in IMSA competition is set to take a new turn in 2020, with the introduction of the mid-engine C8.R for the IMSA WeatherTech SportsCar Championship.

First, though, comes the farewell race for the vaunted front-engine C7.R this weekend at Motul Petit Le Mans at Michelin Raceway Road Atlanta in Braselton, Georgia.

The C7.R, which debuted in 2014, continued the winning legacy of the Corvette Racing program begun 20 years ago that has included victories in the major sports car events around the globe and culminated in WeatherTech Championship GT Le Mans (GTLM) championships the last three years. While those involved are eagerly looking ahead to new horizons and challenges with the C8.R, those thoughts are tempered realizing that the legacy of the C7.R is reaching its conclusion.

“It’s definitely bittersweet,” admitted Ben Johnson, team manager for Corvette Racing that fields the No. 3 driven by Jan Magnussen, Antonio Garcia and Mike Rockenfeller and the No. 4 with Oliver Gavin, Tommy Milner and Marcel Fassler this week at Michelin Raceway Road Atlanta.

“Everyone looks to the future and we’re excited about the C8.R and how revolutionary that design is, and all the opportunities it provides to put us in a competitive spot,” Johnson said. “But ultimately the C7 and that front-engine, rear-drive architecture has been so successful starting with the C5 up to now. That does make it sad to see it go.”

The Corvette C7.R race car was co-developed with the Chevrolet Corvette Z06 street car, creating a direct link from the racetrack to the roadway. The cars share chassis architecture, including an aluminum frame, as well as engine and aerodynamic technologies. The C7.R made that connection a winning proposition, with 16 WeatherTech Championship race wins since 2014 – including back-to-back Rolex 24 At Daytona victories in 2015 and ’16 – and an emotional class triumph at the 24 Hours of Le Mans in 2015.

On the eve of its final race, Gavin fondly reminisced on those highlights. His mind raced first to Le Mans four years ago, when he, Milner and Jordan Taylor carried the Corvette banner alone after the second car was withdrawn following Magnussen’s qualifying incident.

“The 2015 Le Mans victory was very, very special because of the way team all pulled together and really showed that amazing spirit that we’ve seen throughout all the years – particularly after what happened with the sister car,” Gavin said. “That was quite a remarkable victory for us.

“Then the 1-2 victory we had at Daytona in ’16, the two cars racing wheel to wheel, super hard, super fast,” Gavin added, referring to the thrilling finish that saw the No. 4 edge the No. 3 for GTLM honors by .034 seconds. “I think that’s one of the victories that (team co-owner) Gary Pratt is most proud of, competitive racing for 24 hours, for both of his cars to come to the line that close. It was just like the perfect finish for Corvette Racing.”

As proud as they are of the iconic race achievements, it’s the three straight GTLM driver and team championships that provide longer-lasting satisfaction. A Corvette driver since 2002, the 47-year-old Gavin said the three-peat against intense competition cemented the legacy of the C7.R.

“It has been an amazing job for Corvette Racing and the brand. It’s been quite remarkable,” said Gavin, who’s claimed 45 IMSA wins under the Corvette banner. “We’re coming off the back of three championships in a row – ’16, ’17 and ’18. Many victories; many, many hard-fought victories as well as some hard-fought podiums as well.

“The GTLM category has been sort of the high-water mark really over the last number of years, and for us to be able to come away with those three championships in a row, I think is a real testament to the car, the team, all the personnel – everybody who’s been behind this car. It all goes back to the base chassis we get from the road car guys. They sort of laid the foundation for us to have such a great race car.”

There will be no Corvette GTLM championship “four-peat” in 2019. Both cars have been eliminated from contention heading into Saturday’s 10-hour marathon, though the No. 3 is just three points out of second in the standings heading into the race. The program is also in danger of going winless for the first time in an IMSA season since its maiden 1999 campaign. On top of that, a Corvette hasn’t won at Michelin Raceway since 2010.

But that hasn’t deterred those involved in striving to send out the C7.R with another signature victory. It would add to the lore of the program since it would also be the 100th Corvette win in IMSA competition. The script appears to be set, only the final lines need be written.

“We know there’s one more to go, we know there’s this great race at Petit Le Mans,” Gavin said. “It would be great to get the 100th win in IMSA there this coming weekend. We are going to give it absolutely everything. There’s been a lot of preparation, there’s been simulator work, there’s been all kinds of stuff behind the scenes just to make sure that we’re there ready to go.

“It would be extra, extra special.”