ATLANTA — Atlanta United announced Tuesday it has signed defender Miles Robinson to a multiyear contract extension that will keep under contract through the 2023 season.

Robinson, who was selected with the No. 2 overall pick in the 2017 MLS SuperDraft, recently made his U.S. Men’s National Team debut against Mexico and is a nominee for the 2019 MLS Defender of the Year.

“Miles’ ability and potential was evident from the day we first scouted him, and we targeted him in the draft believing he could develop into a national team player,” Atlanta United Vice President and Technical Director Carlos Bocanegra said. “He patiently waited for his opportunity to break into the starting lineup, continued to put in the work needed to improve his game, and now he’s an integral part of our backline. We’re excited to secure him to a long-term contract.”

Atlanta drafted the 22-year-old out of Syracuse University with its first ever SuperDraft selection. After playing sparingly in MLS over his first two seasons, Robinson flourished under head coach Frank de Boer in 2019, playing in all 34 regular season matches. He was one of only 11 players in MLS to start at least 33 matches, and he helped anchor one of the league’s top defenses, as only four teams allowed fewer goals than Atlanta and no team kept more clean sheets. Robinson also finished second in duel success rate (67 percent) among players with at least 25 games played.

Robinson made his club debut in the 2017 U.S. Open Cup against Charleston Battery. He then made his MLS debut on April 7, 2018 and went on to make 10 league appearances and three starts in 2018. He spent much of that season making his mark for the club’s expansion USL team, Atlanta United 2, where he started 14 games and played 1,252 minutes. In college, Robinson was a two-year starter for Syracuse where he was named the 2016 Atlantic Coast Conference (ACC) Defensive Player of the Year. He also scored eight goals in two years and picked up honors for ACC All-Freshman Team, ACC All-Tournament Team and All-ACC First Team.

Internationally, Robinson has made two appearances with the U.S. Men’s National Team after earning his first callup in September. He played 32 minutes in a 3-0 loss to Mexico on Sept. 7 and 25 minutes in a 1-1 draw against Uruguay on Sept. 11. He was once again called up for the upcoming Concacaf Nations League matches against Cuba (Oct. 11) and Canada (Oct. 15).

Key region showdowns highlight FGN on Jacobs Media airwaves
The Jacobs Media family of stations on Friday night will have three big matchups on air, and streaming, as the prep football season moves into its eighth week...
Sports

United looks to bounce back against Montreal
Atlanta United returns to action Sunday when it travels to face Montreal Impact at Stade Saputo...
By AccessWDUN Staff 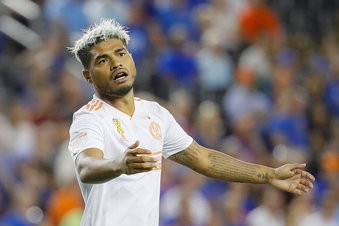 United's Josef Martinez expected to miss at least 1 game
Atlanta United star Josef Martinez is expected to miss at least one game after injuring his right knee and ankle, a better-than-expected diagnosis that sets up the dynamic striker to be available for the MLS playoffs...
By The Associated Press
Privacy | User Agreement | Contact | Advertise With Us
2020 © Jacobs Media Corporation. All rights reserved. EEO Report. Website by Full Media
Login / My Access
close
Search