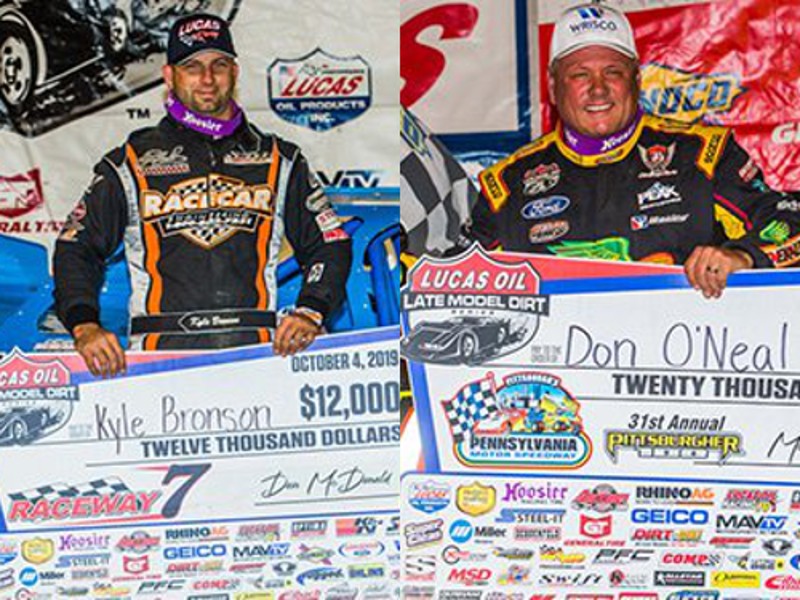 Kyle Bronson and Don O’Neal both made trips to victory lane in Lucas Oil Late Model Dirt Series action over the weekend.

The feature saw a dramatic ending as Owens’ dominance of the race came to an end after he slowed suddenly. With four laps to go he pulled pit side, ending his bid for a fifth series victory of the season.

Bronson led the first nine laps of the race before yielding the lead to Owens. Upon inheriting the lead back from Owens’ misfortune, the Florida native then quickly pulled away from second-place-running Tim McCreadie to win the event.

“These races are so tough to win. I feel terrible for Jimmy, he was the class of the field tonight,” Bronson said. “He was gone and in another zip code. Jimmy and his guys have been helping me a lot lately. I hate it for those guys as well. I knew when they said over race control McCreadie was second, that I just needed to hit my marks and take care of my race car, because he would race me clean.”

On Saturday night, Don O’Neal won his second Pittsburgher 100 in the last three years on at Pittsburgh’s Pennsylvania Motor Speedway.

Jonathan Davenport led from the start of the race and appeared to be on the way to his first Pittsburgher 100 victory. Throughout the latter half of the event, he fought off O’Neal’s constant challenges, but was pulling away when a caution came out for a stalled car in turn four. Under the lap 93 caution, Davenport slowed to a stop in the middle of the backstretch, and was pushed back to the hot pit area to add fuel to his car.

“Man, I needed this win bad,” said O’Neal. “We have a had a good car over the last month. I am pumped! Our car was better on the long green flag runs. I thought I could get by Jonathan a couple times late in the race. I tried to make him (Davenport) run a little bit harder than he wanted to and I wanted him to know I was there. My car kept wanting to die on the last caution, so I am glad the race ended when it did.”