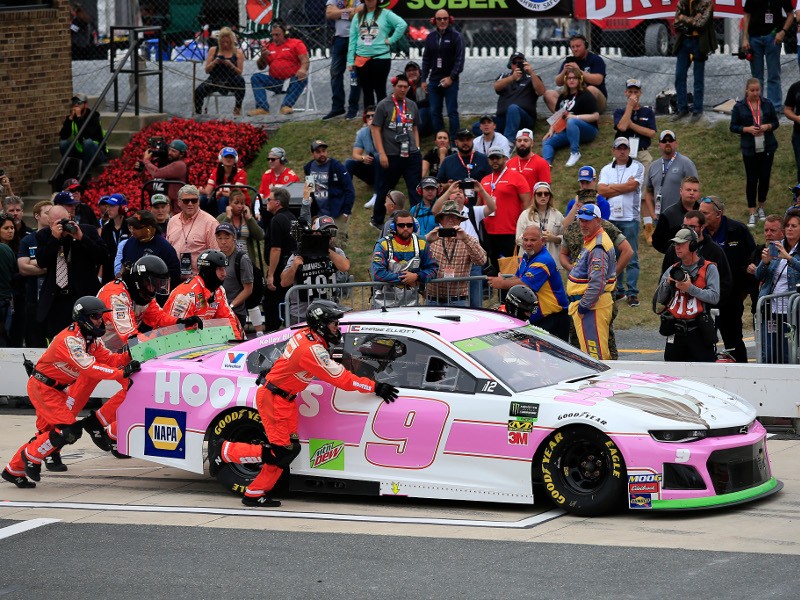 DOVER, Del. – Chase Elliott came into Dover International Speedway pegged as a favorite to contend for the race win.

Instead, an engine issue ended his day after just eight laps in the Monster Energy Cup Series Drydene 400 at the Monster Mile on Sunday, relegating the Dawsonville, Georgia driver to a 38th-place finish.

“Yeah I just had an engine failure of some sort,” Elliott said. “Unfortunately, we don’t really know what it was just yet. It just quit running. It didn’t really seem like anything was off. We were just kind of making laps and then obviously had a failure. It’s an unfortunate way to start this round for sure.”

Elliott won at Dover last October to kick off the Round of 12 and had never finished worse than 12th at the 1-mile concrete oval in seven starts and has six top-five finishes.

The DNF on Sunday sets him 11th in points, seven points beneath the cutoff line entering next week’s race at Talladega Superspeedway. Elliott claimed the checkered flag at Talladega in April after leading 45 laps.

With two races left in this round of the Playoffs, Elliott sized up the challenge ahead.

While Chase Elliott exited the race before he could break a sweat, his teammates at Hendrick Motorsports proved there was speed in their engines.

Alex Bowman powered his way to a third-place finish at Dover following a second-place effort in the spring race. Jimmie Johnson wheeled his No. 48 car to an eighth-place result and William Byron finished 13th.

Bowman was the only one from Hendrick’s stable who capitalized on that power, muscling his way by Kevin Harvick and Denny Hamlin late for his sixth top-five finish of the season.

But Bowman still saw room for improvement after qualifying 12th for Sunday’s race.

“I would’ve liked to have been a little better,” Bowman said. “I think we hurt ourselves not qualifying very well. But yeah, I mean it’s a testament to HMS. We had two miserable races here last year and we have a second and a third at Dover this year.

“Everybody wants that monster (trophy), but I think our cars have come a long way and we’re continuing to move in the right direction.”

Johnson was driving directly with Bowman for much of Sunday’s 400-lap contest but fell through the top 10 late in the race.

Still, the speed shown by the organization gave Johnson a dose of optimism for the 1.5-mile track of Kansas Speedway due in two weeks.

“I think Kansas we’re really excited for and feel that we can control our own destiny there,” Johnson said. “The high-downforce tracks, the Hendrick cars have been much more competitive. I know we’ve all been excited to get back to Kansas and build off of what we’ve had going on here in the last month or two.”

Byron was running sixth during green flag pit stops around lap 184. But a pit-road speeding penalty ruined his chances of competing for a top-five finish.

The second-year driver of the No. 24 Chevrolet had the No. 2 pit stall from pit exit and thought he could peel out through the pit boxes to the yellow line without speeding. He and his team were burned and finished 13th two laps down.

“I got a really good launch out the pit box – probably a little too good,” Byron said. “I was kind of worried about it because I beat the (No.) 48 off pit road pretty good and it nipped us for sure.”

Brad Keselowski and Paul Menard put in solid performances for Team Penske and its affiliate Wood Brothers Racing on Sunday with finishes of 11th and 12th, respectively.

The results weren’t the same for Keselowski’s teammates Joey Logano and Ryan Blaney.

Logano’s lousy luck took effect before the green flag was ever displayed on Sunday.

An issue in the rear-end of the No. 22 car brought the Pennzoil Ford to pit road under the pace laps and relegated the team to the garage. Logano didn’t enter the track until lap 23 and finished 34th, 25 laps down.

“I don’t know what it was yet. Something in the back didn’t do what it was supposed to do when you hit the gas,” Logano said. “I don’t know. It’s really weird because it was fine for qualifying. Everything was fine.

Nothing felt weird and the car was impounded from there.

“Somewhere between there and the start of the race, something broke.”

Blaney suffered his problem on lap 297 when he reported a total brake failure on his No. 12 Ford. The team worked feverishly to get the car back on track to salvage points but to no avail. Blaney finished 35th, 103 laps down.

Despite similar results, the Playoff implications for Logano and Blaney were a bit different.

Logano exited Dover tied with William Byron for eighth-place in points, the final transfer spot into the Round of 8.

Blaney, on the other hand, entered 10th in points and knew he needed a good run at one of his worst tracks to set himself into a good position for the rest of the round.

He now sits last in points, a significant 22 points behind the cutoff line. Blaney is 15 points back of seventh-place Chase Elliott.