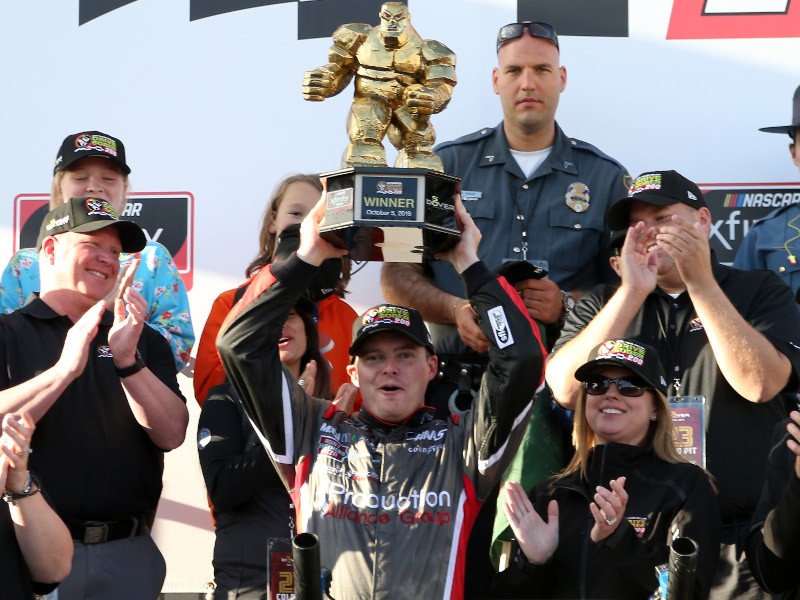 Custer held off a hungry field of Playoff contenders on a restart with seven laps to go and pulled away from Justin Allgaier to win the Use Your Melon Drive Sober 200 at Dover International Speedway on Saturday afternoon.

Custer, who claimed the victory as Dover celebrates its 50th anniversary, is the fifth Xfinity Series driver to win in their 100th start.

“I’ve wanted to win here so bad for so long,” Custer said. “I’ve been close a number of times but just to win the gold Monster (trophy) is unbelievable.”

Michael Annett claimed the last available spot in the Round of 8 as the first round of the NASCAR Xfinity Series Playoffs came to a close Saturday. Advancing along with Custer and Annett are Christopher Bell, Tyler Reddick, Austin Cindric, Noah Gragson, Chase Briscoe and Justin Allgaier.

Custer, Annett and Haley were the biggest benefactors of a caution with 23 laps to go that fell in the middle of green-flag pit stops that changed the complexion of the race.

Custer maintained the lead on the lap 185 restart only to see another caution displayed when Ray Black, Jr. crashed in turn 2, where Matt Mills and Stephen Leicht were also collected.

Luckily for Custer, the final caution didn’t limit him. He cleared Allgaier and Haley on the restart and pulled away swiftly for his seventh win of 2019, tying Christopher Bell for the most in the series this season.

“(The car) felt really good in practice,” Custer said. “I thought we had a good car. I don’t think it was everything we expected in the race. We kind of tried something a little bit different in this race but just (an) amazing pit call.”

The Playoff drama began on the opening lap when both Reddick and Harrison Burton broke loose on the back straightaway. Reddick slapped the wall with the right side of his car and continued, but Burton wasn’t as lucky.

Burton spun toward the inside of the track and was clobbered by teammate Brandon Jones, lifting Burton’s No. 18 car off the ground. Both drivers were checked and released from the infield care center, but Jones’ Playoff hopes ended there.

“There’s nothing that you can do about it,” Jones said after exiting the care center.

The early cautions continued on lap 21 when Nemechek spun Mike Harmon exiting turn 4 and onto the fronstretch.

That was the end of yellows for on-track incidents until Bassett spun on lap 177.

Annett, who finished sixth after starting from the rear of the field due to an engine change, advanced out of the first round of the Playoffs for the first time in his Xfinity career.

“I can’t say enough about these guys all the way through these playoffs,” Annett said. “To come from the back today is just a testament to the car they gave me.”

Nemechek finished in 10th place after an eventful race. A strong pit stop at the conclusion of Stage 2 allowed his No. 23 to exit pit road fourth. That effort went for naught after a loose lug nut forced Nemechek back to the pits.

“That’s why we’re standing here, I feel like,” Nemechek said. “It just put us behind the eight-ball. We were in good position all day and right here, we came out of the pits fourth, but we didn’t have enough lug nuts on the left rear.

“Had to come back down. You can’t have a loose wheel here at Dover. It’s just something that you don’t want to have under green. I think we got the margin down to minus-six or something like that after the first two stages and were executing like we needed to all day. We just haven’t been able to close this year.”

Rounding out the top five behind Custer were Allgaier, Cindric, Haley and Briscoe. Annett was sixth and his JR Motorsports teammate Noah Gragson was the last car on the lead lap in seventh. Nemechek, Smith and Sieg completed the top 10.

*Advances to the Round of 8