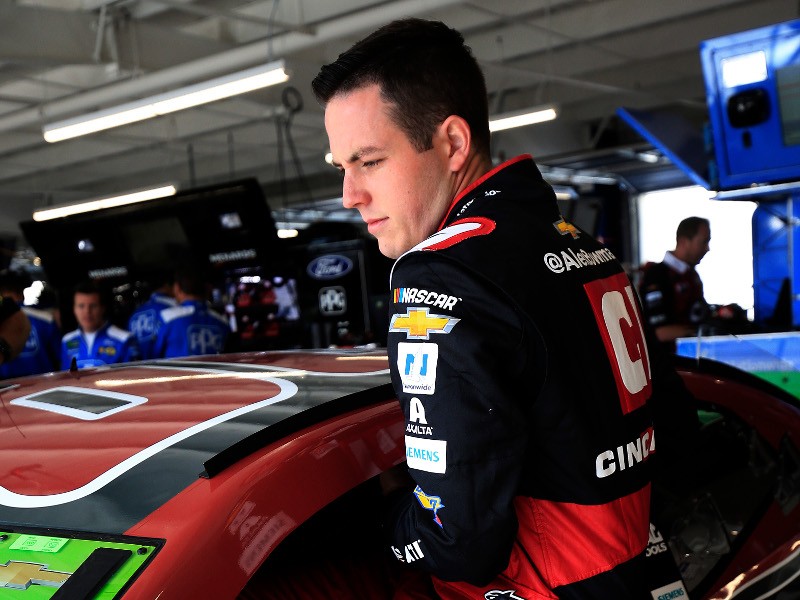 Last weekend Alex Bowman earned headlines for his determined work behind the wheel of his No. 88 Hendrick Motorsports Chevrolet – rallying to a dramatic runner-up finish at the Charlotte road course to earn a spot in the second round of the Monster Energy NASCAR Cup Series Playoffs, which begins with Sunday’s Drydene 400 at Dover International Speedway.

But he’s also getting plenty of attention for an incident on pit road after the race. And Bowman showed up at Dover, fully expecting questions about it.

On Sunday, an exhausted Bowman climbed out of his car at Charlotte and sat on the ground leaning against the car having been ill much of the week. While a medical worker and members of his team kneeled down by him to see how he was feeling, Cup driver Darrell Wallace, Jr. approached. The two drivers exchanged words and Wallace splashed his drink at Bowman as he walked away.

Wallace was angry with the way Bowman raced him. And vice versa.

“I’m just focused on running well this weekend,’’ Bowman said Friday. “I’m focused on my race car, trying to give the best feedback I can throughout practice and being strong today and Sunday.’’

When asked if he expected any on-track retaliation from Wallace, Bowman deferred.

Bowman said he and Wallace have not spoken since their heated discussion on pit road at Charlotte.

“I feel like he said what he had to say after the race,’’ Bowman said. “I’ve just been kind of moving forward since then. I don’t think we need to talk before Sunday. I think it is what it is.’’

Certainly for Bowman, it has been a positive start to the Dover weekend. He was fifth fastest in opening practice.

After announcing big career news this week that he would be moving up into the Monster Energy NASCAR Cup Series ranks beginning in 2020, Xfinity Series championship contender Tyler Reddick addressed the media and offered his thoughts on the significant move in his career.

Reddick is the defending Xfinity Series champion – earning the title last year with JR Motorsports before moving to Richard Childress Racing this year. And Reddick has not slowed down. He won the regular season championship and is ranked third in the Playoffs coming to Saturday’s Use Your Melon Drive Sober 200 – the final race of Round 1 of the Playoffs.

“Richard (Childress) has been pretty open with everyone when asked if he wanted to put me in a Cup car,’’ Reddick said Friday. “I think he realized if I wasn’t going to be able to race for him in the Cup Series I was probably going to be picked up by someone else. They really wanted me to stay.’’

Reddick will be replacing Daniel Hemric in the No. 8 RCR Chevrolet next season. Hemric is a longtime RCR driver who started with the team driving in the Gander Outdoors Truck Series before moving into the Xfinity Series for two years and finally up to the Cup ranks. Hemric actually leads the Cup Sunoco Rookie of the Year standings but has only a pair of Top-10 finishes in his first full Cup season.

Reddick has five victories and a series best 21 Top-5 and 24 Top-10 finishes. He won at Las Vegas three weeks ago and was runner-up at the Charlotte ROVAL Playoff race last week.

Good News And A Good Plan

Fan favorite Corey LaJoie shared some good news Friday, he and his wife Kelly are expecting their first child due next Spring. The couple married New Year’s Eve 2018.

And the good vibes may well continue on-track as well. The driver of the No. 32 Go Fas Racing Ford is hopeful the small team can have a good run in Sunday’s race. He won a NASCAR K&N Series race at Dover in 2012. More so, LaJoie, son of former Xfinity Series champion Randy LaJoie, is excited about next week’s stop at Talladega, where he feels his team has a better show for a good outing.

“We have a pretty solid average finish over the three speedway races this year and our game plan is to not get up there and race until right there at the end because normally we have just enough speed to get right into the middle of a crash,’’ LaJoie said.

“We will let everybody crash first because it isn’t a matter of if, it is a matter of when. We will stay within arms distance, not make mistakes on and off pit road and be there at the end. If there are 15 cars left and we are in a decent spot, then you get up there and race.’’

Logano topped opening practice for the Monster Energy NASCAR Cup Series on Friday, posting a fast lap of 163.222 mph around the high-banked Dover one-miler. His No. 22 Ford was a full 1-mph faster than the field in that session. Hendrick Motorsports driver – and first-year Playoff driver William Byron was second best with a lap of 162.133 mph in the No. 24 Hendrick Motorsports Chevrolet.

Larson’s No. 42 CGR Chevrolet was quickest in final practice with a best lap of 162.705 mph – significantly faster than Martin Truex Jr. (161.377 mph) who won the Cup race at Dover this May. Kevin Harvick, Brad Keselowski and defending race winner Chase Elliott rounded out the Top-5 in Friday’s final practice session.

The Stewart-Haas Racing driver Harvick, a two-time Dover winner, turned in the quickest 10-lap average between both sessions.

Playoff driver Chase Briscoe led opening practice at Dover with a speed of 152.394 mph in the No. 98 Stewart-Haas Racing with Biagi-DenBeste Ford.

The Top-8 of the current 12 Playoff drivers will remain championship eligible following Saturday’s race. Brandon Jones and John Hunter Nemechek who are tied in ninth place in the standings were ninth and 10th respectively in the first session. Eighth place Michael Annett, who is on the Playoff bubble, was 14th.