Game of the Week: A hot Habersham team looks to continue streak in Region 8-6A opener against Lanier 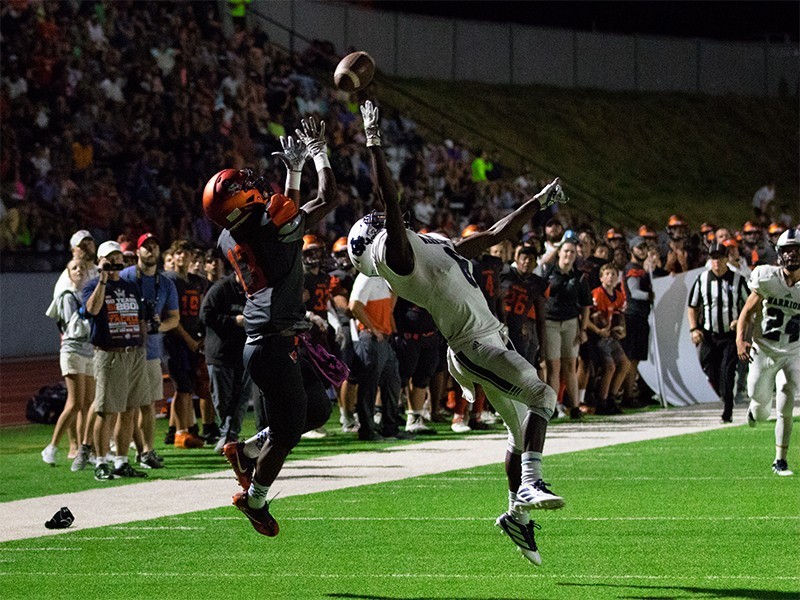 Habersham's Martrell Turner goes up for a touchdown during the Raiders' 42-28 win over White County earlier this season.
Photo/Seth Chapman, FILE
Contact Editor

MT. AIRY — If Habersham Central is going to beat Class 6A No. 8-ranked and Region 8-6A foe, Lanier Longhorns, they'll need to crack a stingy defense.

The two programs will tee it up at Raider Stadium in Mt. Airy tonight. Kickoff is set for 7:30 p.m.

The Longhorns are only giving up 10.2 points per game on defense through five games and haven't given up more than 20 points in any game this season.

"We've got to be able to run the ball and I feel like that opens up everything for us," Harrison said. "But we can't become one dimensional because of the things they do defensively."

After starting the season 0-2, the Raiders have reeled three straight wins, including two over arch-rivals, White County, and Stephens County -- the first win over the Indians since 1996.

"Our kids didn't panic," Harrison said about the 0-2 start. "They didn't seem like we're not any good. The kids believed that we could be a pretty good football team and really didn't flinch at all. They knew we had a lot of football ahead of us. Our kids have worked hard. I'm just really pleased with where we are right now."

The Raider offense is averaging 34.3 points per game in the three straight wins, a 14 point improvement from their two-straight losses to Dawson and Madison counties to start the year.

Lanier coach Korey Mobbs has taken notice of the improvement.

"They've got really good players. They're a program -- not just a flash in a pan," Mobbs said. "They're a physical program. We're excited."

Harrison says Lanier is very talented and being physical against the eighth-ranked Longhorns will be key for the Raiders.

"They're really talented," Harrison said. "We have to be really physical against them. They're fast. We have to find a way to stay in the game early. We've got to minimize our mistakes. You can't give them anything. We have to force that game to go four quarters."