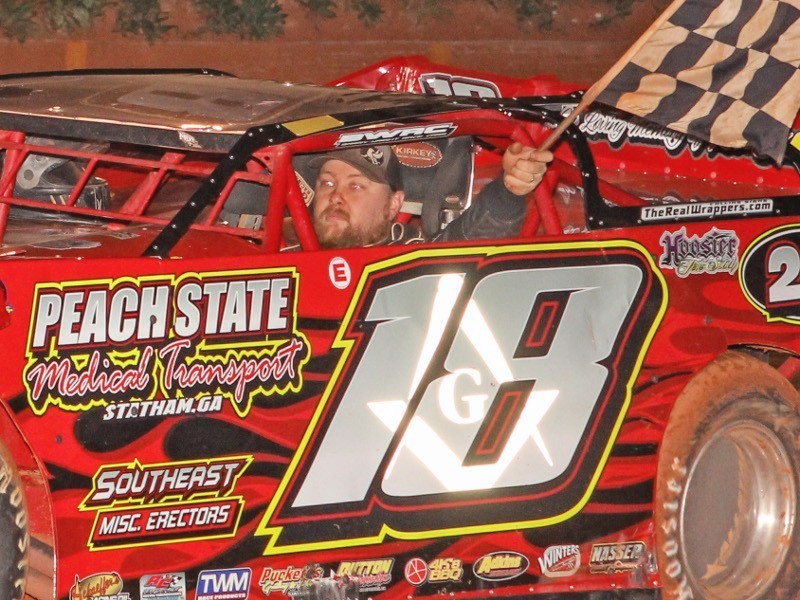 The Jefferson, Georgia speedster held off 2019 division champion John Anderson in a one-lap shootout for the Limited Late Model feature win at the ¼-mile clay raceway.

Sims started the night on the outside of the front row, with Anderson on the pole. On the drop of the green flag, Sims edged out Anderson as the duo raced into turn one, and moved to the point.

Behind the leaders, Chris Woods held onto third, with Brandon Roberts and David McCoy jockeying for fourth.

The race was slowed for the first time just a few laps in due to a spin in turn two. Back under green, Sims would again pull away, with Anderson in pursuit.

Sims had pulled out to a large advantage as the field was coming to the white flag. But that evaporated when the caution came out for a pile up in turn three. It started when Woods spun in the fourth turn, gathering up Roberts and Lance Finn in the process. Roberts was unable to continue due to apparent radiator damage.

That set up a one lap dash for the win. On the restart, Sims jumped out to about a three car length advantage, and went on to record the victory.

Anderson had to settle for second, with McCoy in third, Woods in fourth and Finn in fifth.

In other action, Nick Sellers held off Chase Lampp for the Hobby feature victory. Joe Yarbrough finished third, with Aaron Calvert in fourth and Austin Brumbelow in fifth. Tyler Canup, the 2019 division champion, did not compete on Saturday night.

Jordan Poole capped off his 2019 Championship season with the Modified Street finale victory. Aaron Criswell followed in second, with Taylor McElhannon in third.

Steve Hill was the winner in the Stock 4B feature. Adam Jones followed in second, with Bobby Croya third, Charles Earnest fourth and David Ivester fifth. 2019 division champion John Martin did not compete on Saturday night.

For more information on Winder-Barrow Speedway, including news on the 2020 race season, visit WinderBarrowSpeedway.com.